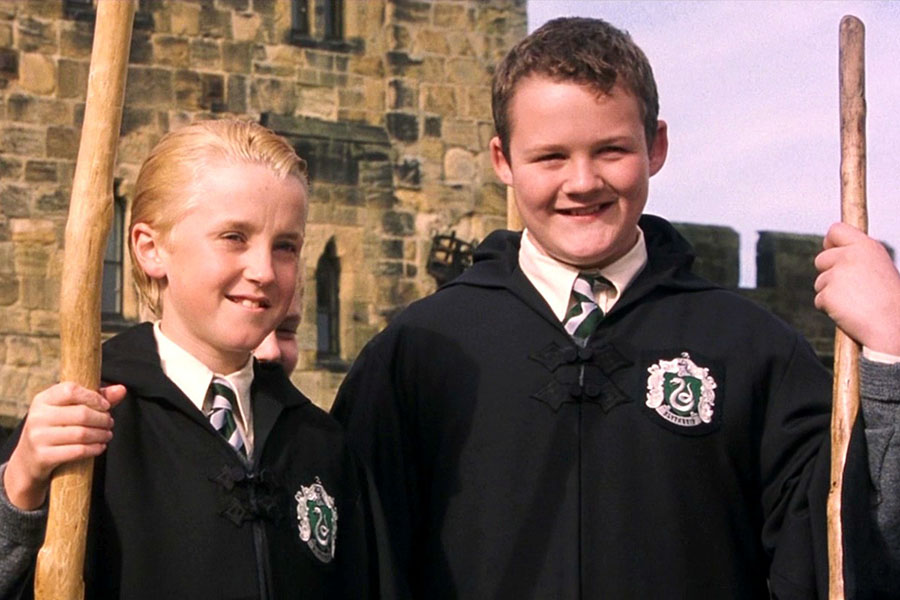 Since their Hogwart days ended in 2011, the youthful cast of the Harry Potter films have all gone on to do big, exciting things.

• Got a Harry Potter novel? It could be worth a fortune
• You’ve got this Harry Potter star’s name wrong
• Aussie model’s over-the-top wedding dress parade

Hermione Granger (Emma Watson) has spoken in front of the United Nations, Harry Potter (Daniel Radcliffe) has performed completely naked on Broadway and Neville Longbottom (Matthew Lewis) went from being the chubby dork to a veritable sex symbol.

Along with his best friend Vincent Crabbe, Goyle was Malfoy’s loyal but bumbling servant, usually found at the scene of many a nasty, ill-advised schoolboy crime.

Maybe all those years of being walked all over by Malfoy lit a fire inside because Herdman, now 28, has grown up into a big, brawny Mixed Martial Arts (MMA) fighter.

The actor and father made his amateur MMA fighting debut last week in London, beating his opponent Janusz Walachowski.

In an interview with an MMA website, Herdman said he was following in the footsteps of his father, a boxer and rugby league player.

“I don’t see it so much as a career change, I still act and am passionate about both acting and fighting,”Herdman said.

“I obviously grew up around sport, looking at my Dad’s newspaper clippings as a kid, he taught us all how to fight from an early age.”

“It’s raw, exciting and unpredictable. I find it more interesting than boxing although I appreciate the beauty and art in boxing.”

Herdman was one of the few actors to star in all eight Harry Potter films.

Bizarrely, despite the many options – Slytherin Sicko, Demented Dementor, Violent Voldemort – Herdman is yet to have a nickname for his in-the-ring persona.

Internet, you better get on that one quick-smart.

If you’re curious and keen to see a child star beat up a Polish man, you can watch Herdman’s fight below.

Crop tops were easily the trend of 2015, for women at least.

While they’re now falling out of favour thanks to over-exposure (pun intended) they may soon be gaining popularity in the men’s fashion market.

Why? American footballer Ezekiel Elliott is doing his best to make male midriffs a thing with his outfit for the all-important NFL draft.

Thankfully, Elliott has the abs to pull this look off … just.

He actually had a good reason for rocking the crop – it was a throwback to his days as a college player with Ohio State University.

He would wear a short top to prevent opponents from grabbing onto him easily.

Ezekiel Elliott has a crop top under his suit. “I’m the hero in the half shirt so it was only right I came to the draft wearing a crop top”

That’s all well and good, but it might take a little more for this look to catch on globally.

For the time being, the face of this guy in the background sums up how we feel about the male crop top:

Some things in life are expensive. You expect to pay a lot for a car, for example. Rolex watches are another pricey item. Private school fees can cost a bomb.

Hair dryers? They don’t typically cost you an arm and a leg.

British company Dyson of vacuum cleaner fame (if there is such a thing) is here to change all that.

Their latest invention, the Dyson Supersonic hair dryer, promises to dry hair quickly and quietly by producing a focused stream of air that adjusts its temperature automatically to avoid damaging your hair.

How do they know it will do this? They tested it on 1600 kilometres of real human hair. Try and get that image out of your head.

Whilst no official Australian pricing has been released yet, overseas pricing suggests it’s going to cost at least AUD$500.

So, if you don’t have any living expenses, children or hobbies, treat yourself!