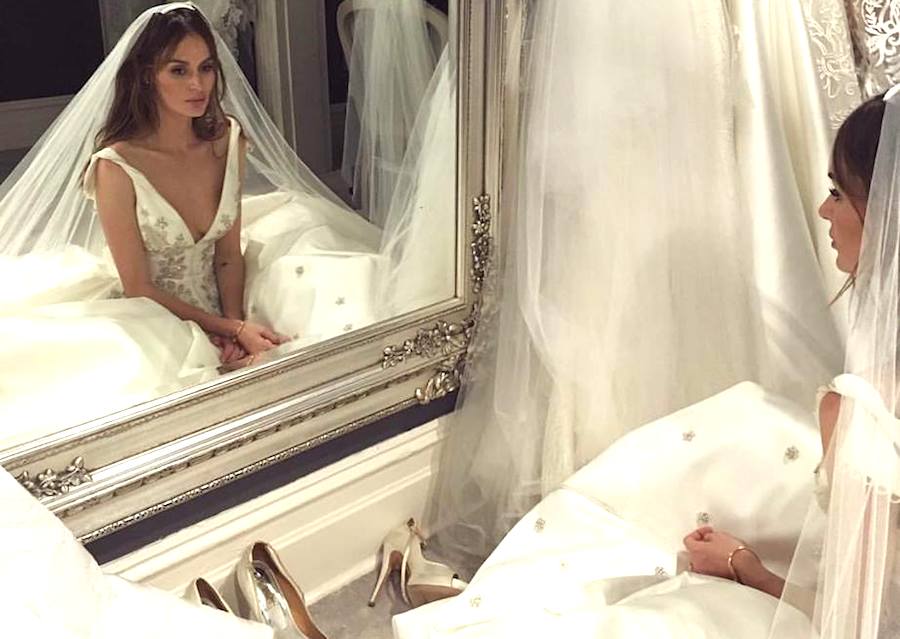 For many brides, their wedding day is an opportunity to splurge on a designer gown and feel like a princess for a day.

For Australian model Nicole Trunfio, one dress doesn’t quite cut it.

When the 30-year-old model from Perth wed her longtime boyfriend, Texan guitarist Gary Clark Jr, she enlisted a stylist, a photographer, several of her supermodel pals, three designers and Harper’s Bazaar to ensure her wedding was no ordinary affair.

“They have spent their lives trying on and wearing the most exquisite gowns in the world and now you have to top every dress they’ve ever seen or touched!”

Based on happy snaps from the star-studded event, held in Palm Springs Coachella immediately after the Coachella music festival, Patrickson did her job and then some.

Across her wedding week Trunfio rocked no fewer than four all-white designer outfits.

For a visit to the festival, Trunfio wore a strapless gown from New York designer Houghton.

She followed this up with another Houghton creation, this time a silk cape, pants and hat, for her rehearsal dinner.

Next up was her main wedding dress, an elaborately embroidered Steven Khalil creation, complete with Swarovski crystals and a 2.5-metre train.

“I have heard about the moment you find ‘the’ dress,” Trunfio posted on her Facebook page.

“But I never believed it was actually a thing, only cliche. I had that moment, after months and months of searching the globe, Paris, Milan, Spain, America…. To find the one.

“I just want to thank you Steven Khalil from the bottom of my heart and soul for imagining this magnificent creation, and custom making me this ‘perfect’ dress. It was the one.”

Or “the four”. Who’s counting?

Julia Roberts is in another one of those ridiculous Hollywood rom-coms with an ensemble cast and very little substance and she’s already being panned for it.

The main issue people have is not with her performance but rather her hairdo, a fairly unsightly orange-hued bob.

Here she is on the poster (bottom left), alongside co-stars Jennifer Aniston, Kate Hudson and Jason Sudeikis. If you just did a double-take because Jules’ hairdo looks familiar, congratulations – you’re either a big movie fan or you’ve got the same hairdo and recently looked in the mirror.

The bizarre bob is actually a wig (thank the lord) and Roberts’ has rocked it before, a long, long time ago.

Her character, an actress named Anna, wears it for a role she has in a space movie playing an astronaut.

Why Roberts didn’t immediately burn this monstrosity after Notting Hill wrapped is beyond us but at least she’s being thrifty and sustainable with her costume choices.

And today in bizarre celebrity coincidences, someone found a photo of their great great grandfather and he looks a lot like Matthew McConaughey.

Reddit user Sanders Parker shared the old-school snap on the internet forum and it immediately received hundreds of comments to the effect of “time travel is real”.

Seriously, it may as well be a behind-the-scenes photo of McConaughey in character for an upcoming period drama.