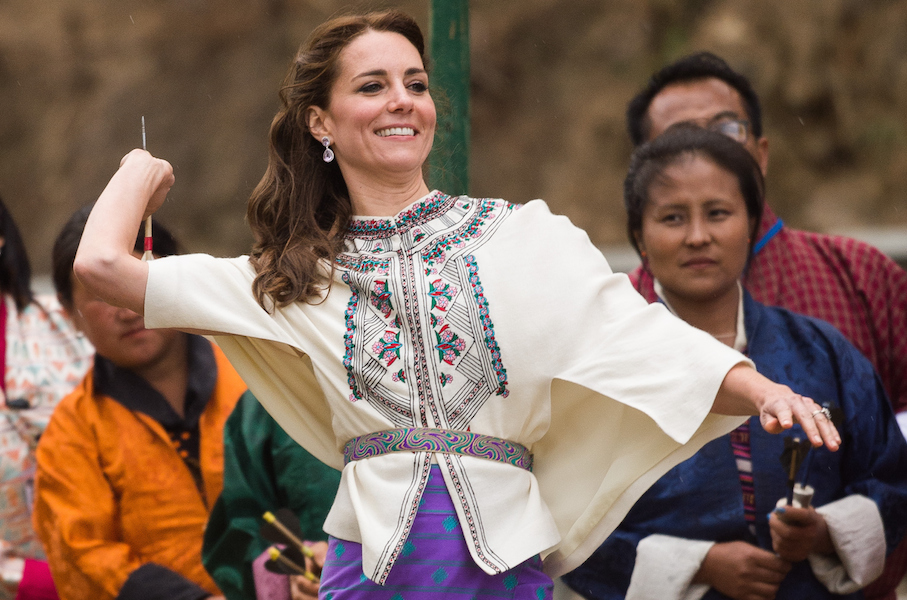 It’s hard work getting dressed when you’re a royal.

You have to be stylish but demure, functional yet glamorous and modern but classic.

This pressure increased ten-fold for Kate Middleton, Duchess of Cambridge, on her recent tour of India and Bhutan.

• Amy Schumer: don’t call me ‘plus-size’
• Kate Middleton ‘does her own cooking’
• Forget Will and Kate: the new royal ‘it’ couple

Not only did she have airplane travel and official duties to contend with, she was also faced with the challenge of conforming to the local dress standards and being culturally respectful.

We’re tired just thinking about it.

The wardrobe Kate took along for her and William’s week-long tour is a colourful explosion of high glamour and low practicality. Think high heels, all-white dresses, sequins, large diamond earrings a

Thankfully, the royal couple left the kids at home so Kate didn’t also have to contend with grubby hands and piggy backs.

What she did have to do, however, were activities including but not limited to: bottle-feeding baby elephants and rhinos, bushwalking, running, soccer, archery, cricket and mingling with officials and locals alike.

First up, Kate and William hit Mumbai and Kate wore some high-heeled wedges and a knee-length dress by a local designer to – wait for it – play soccer and cricket. Because everyone bats their personal best in five-inch heels. The next day, they hit Delhi to pay their respects at the place Mahatma Gandhi was assassinated. Kate suffered several unfortunate Marilyn Monroe moments as she and William laid flowers at the memorial. At one point she even ditched her shoes, a pair of US$675 pale pink pumps by British designer Rupert Sanderson. There’s no rest for the noble, so Kate spent another day out in the Indian heat at the Centre for Wildlife Rehabilitation and Conservation at Kaziranga National Park. To stroll through the park’s dirt paths and feed baby elephants and rhinos, the Duchess of Cambridge selected a Topshop dress (it’s now sold out, of course), wedge heels and diamond drop earrings.

For goodness sake, will someone give the poor woman some shorts and a t-shirt? This is getting ridiculous. This brings us to the baby rhino, which is a surprisingly cute sight vastly improved by the presence of dressed-up Kate chasing it around in high heels like she chases Prince George around. To cap off a week of sheer impracticality, Princess Kate actually did archery in a jewelled cape in Bhutan. Most of us can’t even do archery full stop. She did it in a jewelled cape. She also threw some darts and actually looked like she was genuinely enjoying herself. The whole thing looks like British Vogue‘s interpretation of India.

In case you were wondering, Kate’s outfits got even dressier for her evening commitments. Because, you know, if you’re playing soccer in a designer dress you really have to up your ante for black tie events.

Here’s a visual representation of all of her tour get-ups:

That’s one hell of a luggage allowance.

So, did Kate hit her targets? (Figuratively, not literally – we know she can throw a mean dart.) We’ll give her 10/10 for glamour, 6/10 for cultural relevance and appropriateness and 2/10 for comfort.

She gets full marks for sporting ability though.