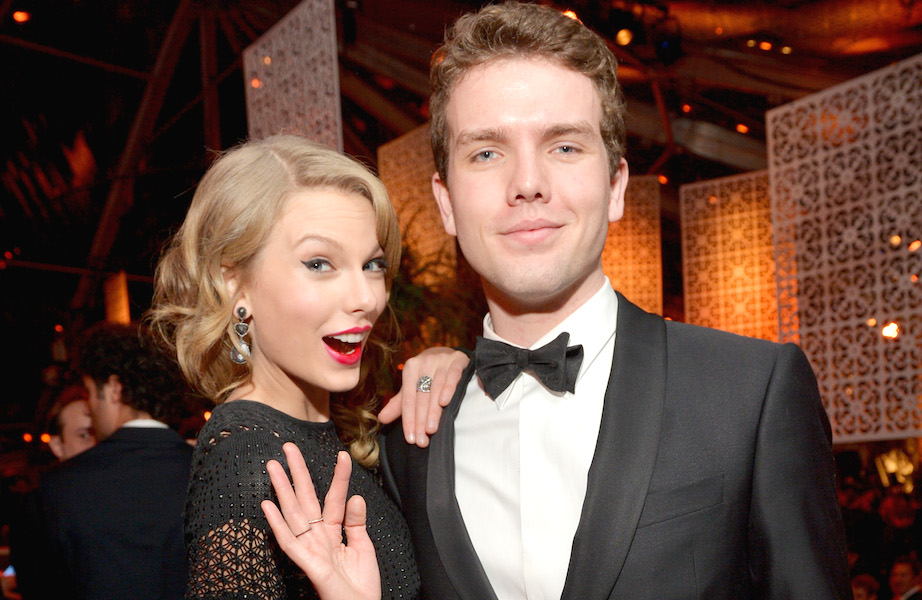 Taylor Swift’s younger brother is not impressed by a lyric on Kanye West’s new album, The Life of Pablo.

In the track ‘Famous’, West raps: “I feel like me and Taylor might have sex / I made that b***h famous.”

• First look at Playboy’s new non-nude approach
• Look out, Brangelina’s kids are all grown up
• Armytage uninvited from UN lunch after stunt

The line is a reference to the infamous incident at the 2009 MTV Awards in which West interrupted Swift’s acceptance speech for Best Female Video to proclaim: “Beyonce had one of the best videos of all time.”

While some outlets reported West gave Swift a heads up about the lyric, a spokesperson for the songstress denied she had approved the song.

“Kanye did not call for approval, but to ask Taylor to release his single ‘Famous’ on her Twitter account,” Swift’s rep told People magazine.

“She declined and cautioned him about releasing a song with such a strong misogynistic message. Taylor was never made aware of the actual lyric, ‘I made that b***h famous.'”

Austin, Swift’s 23-year-old brother, took to Instagram to air his disapproval of the song, posting a video of himself throwing a pair of West’s coveted Yeezy Boost shoes into the rubbish.

“Getting a head start on some spring cleaning. Here we go again,” he captioned the short video, which showed him humming as he hurled the expensive West-designed sneakers into a trash can.

Hadid, 20, attended the launch party for West’s album but said on Twitter her attendance did not mean she endorsed the views shared.

“My attendance somewhere does not mean I agree with everything being said in the music playing there. My friends know of my loyalty,” Hadid wrote.

King said she felt “sad and disappointed” by the song, adding that she stood by her “sister”.

Swift and West publicly made up after the 2009 incident at the 2015 MTV Awards, so whether West’s song is a step backwards in their relationship remains to be seen.

At the very least, Swift clearly has her brother as back up if she needs him.

The celebrity parent-child duos who are impossible to tell apart

Ben Stiller’s 10-year-old son Quinlin managed to upstage his dad at the Zoolander 2 premiere this week with his own flawless version of Stiller’s iconic “Blue Steel” face.

Clearly imbued with his father’s talent, Quinlin pouted his way down the red carpet without breaking character.

Quinlin is not the only famous kid to bear a striking resemblance to their celebrity parent.

On Monday, actress Gwyneth Paltrow shared a photo of herself and her 11-year-old daughter, Apple Martin, on Instagram

The resemblance was uncanny. That’s not to mention two other mother-daughter duos who stepped out this week to showcase their similarity.

Susan Sarandon took her 30-year-old daughter Eva Amurri as her date to the SAG Awards, proving once and for all that it’s possible to be sexy in your 60s.

The two of them could be sisters.

During an appearance on The Late Show with Stephen Colbert alongside Tina Fey, Robbie revealed she owns a tattoo gun and regularly inks her friends.

While her intentions are always good, the 26-year-old actress admitted she once made a major error while tattooing a friend and crew member on the set of her upcoming action movie Suicide Squad.

“I’ve given 26 tattoos. I gave myself a tattoo on the foot,” Robbie told an incredulous Fey and Colbert.

“I did spell one wrong once, that was extremely awkward.”

“It’s a good time to be pretty,” Fey interjected.

Robbie went on to explain her victim was a cast assistant named Simon who was meant to receive a “SKWAD” tattoo like the rest of the cast but instead got a large “SWAD” tattoo on his arm.

“Remind me not to let you tattoo me,” Colbert responded.