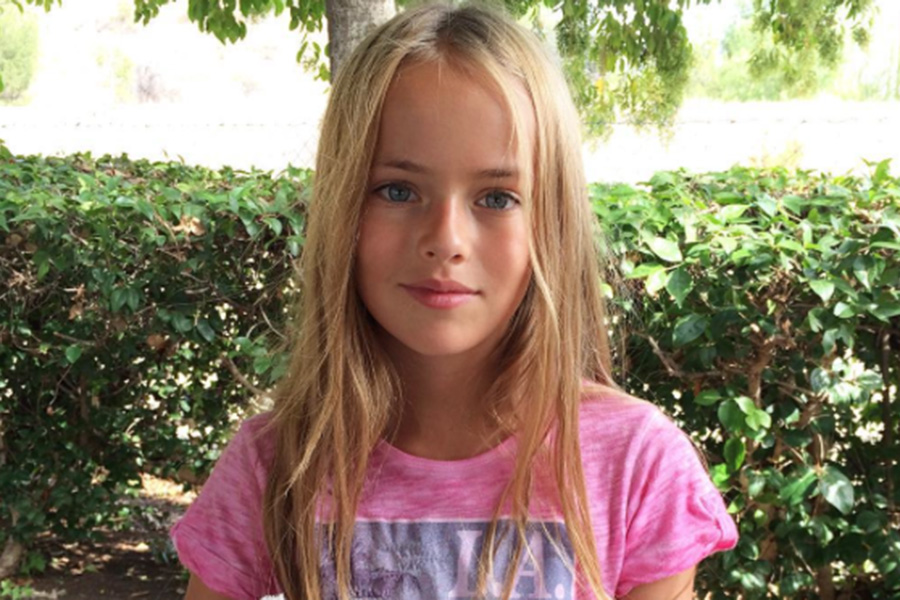 • Inside Beyonce’s $10k a night Airbnb accommodation
• Who’s to say when a model is too thin?
• First look at Playboy’s new non-nude approach

This week, the young Russian model – nicknamed the “little supermodel” and described as “the world’s most beautiful girl” – signed with prestigious American agencies LA Models and New York Models.

Her mother, Glikeriya, broke the news on Kristina’s Instagram account, which she is running until Kristina is old enough to do it herself. The posts garnered a mixed reaction in the comments section – while many congratulated Kristina, others expressed criticism over her young age, while some left hurtful comments about her appearance.

“She’s not that pretty,” wrote one commenter.

“This girl is beautiful, but she is just a kid. Do not take her childhood,” another added.

Other comments were more concerning, including a handful of men asking Kristina to be their girlfriend.

In the past Glikeriya, 40, has been accused of posting sexualised images of her daughter that elicit provocative reactions from strangers.

“I am certain in my mind all her photographs are absolutely innocent,” Glikeriya told MailOnline in 2014.

“You must think like a paedophile in order to see something sexual in these pictures, so it is time for you to see a doctor.” “Some years ago I posted a picture of little Kristina on the beach in the Maldives hugging her three soft toys and laughing,” she said.

“She was holding all her toys in front of her chest and hugging them, and you know what comments I got to this picture?

“‘Oh, she is covering her breasts because she thinks she has something to hide!’ Can you believe it? I think people who post something like this have serious psychological problems.”

Glikeriya has outlined strict rules on Kristina’s official Facebook page in an effort to combat the problem, including a ban on negative comments, “role playing” and content that is “not appropriate for Kristina’s age”.

A quick scan through Kristina’s Instagram profile reveals a host of comments which breach these rules, including one describing Kristina as “really hot” and another saying she will one day “make some lucky man one awesome bride”.

Kristina is not the only child model to spark controversy – French model Thylane Blondeau made headlines when she posed for a provocative Vogue Paris photo shoot at the age of 10.

She still has people commenting on her photos and describing her as “hot” and accusing her of having cosmetic procedures to enhance her appearance.

Psychologist, school counsellor and technology expert Jocelyn Brewer says how children like Kristina and Thylane cope with attention on social media all comes down to education.

“It’s about what digital literacy and personal insight she [Kristina] has about the whole ‘social media is not real life’ narrative … what training and education she gets about the way she’s being used to promote clothes/brands etc.”

While Ms Brewer acknowledges that “technically a 10-year-old shouldn’t be on social media” (13 is usually the minimum age for most social media sites), she says having a parent monitor their accounts until they are old enough is a common approach.

“Think carefully about the reasons for this and the underlying needs, desires and expectations of posting lots of information about your kids,” Ms Brewer advises parents.

“Is it a not-so-humble brag? Is there a hope for “Insta-fame” (like a contemporary version of that urban myth about models being discovered at the shopping centre)? What other ways could you share information and your sentiment without being too revealing of your child’s image?

“It’s very different having a closed account for selected family and friends compared to an open, clearly self-promoting page which is designed to attract comments, likes and followers.”