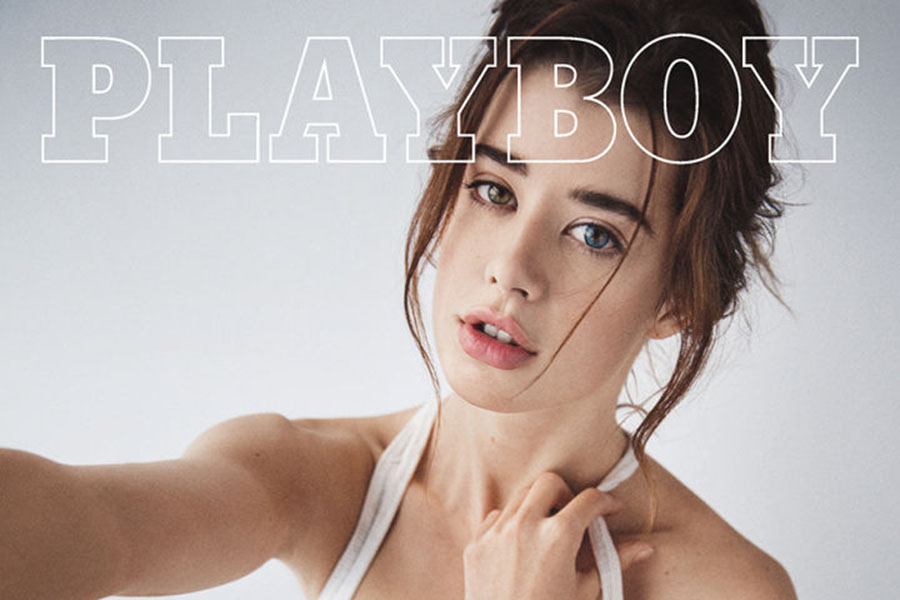 The first look at Playboy‘s all-new, non-nude approach has hit the web, revealing the magazine really has done away with its infamous raunchy spreads in favour of artier, more demure photographs.

• Mariah Carey’s obscene engagement ring
• Look out, Brangelina’s kids are all grown up
• Sly’s daughters are Hollywood’s new ‘it’ girls

The March 2016 issue, which hits newsstands next week, stars little-known model Sarah McDaniel in a Snapchat-inspired shoot designed to feel intimate and relaxed – but the raunchiness remains.

“The idea was to look at me from a boyfriend’s perspective,” McDaniel said of the photographs, many of which appear to be self-taken but have actually been snapped by photographer Theo Wenner.

Snapchat is a controversial phone app that allows people to send captioned photographs to their friends, which disappear from their phone after being viewed.

The issue also stars model and great-granddaughter of Ernest Hemingway, Dree Hemingway, and model and artist Myla Dalbesio. Their photographs are similarly pared-back.

According to Cory Jones, Playboy’s chief content officer, the change in approach is paying off for the magazine.

“A year and a half ago, we relaunched Playboy.com as a safe-for-work site, and traffic skyrocketed 400 percent,” he told The New York Times this week.

“The average age of our visitors dropped from 47 years old to 30. It showed how the brand can still resonate.”

The real test? Whether the first non-nude issue actually sells.

Diane Keaton: a league of her own

What do you do when you’re a 70-year-old Oscar winner revered for your unique style and you’re asked to pose with a pack of cookie-cutter up-and-comers in ball gowns?

If you’re Diane Keaton you say, “Screw the dress code!” and you wear whatever the hell you want.

The film veteran was asked to appear on Vanity Fair‘s 2016 Hollywood issue alongside ingenues like Brie Larson, Saoirse Ronan and Alicia Vikander.

While most of her fellow cover stars are in glamorous designer gowns, Keaton appears on the cover in a bowler hat, a polka dot neck scarf, leggings, a winter coat and boots. According to the magazine’s fashion and style director Jessica Diehl, Keaton is wearing her own clothes.

In an article on Vanity Fair‘s website, Diehl recalled a phone conversation ahead of the shoot in which she suggested to Keaton she wear a tuxedo on the cover.

Keaton took the idea even further, asking whether she could channel clothing and shoe designer Paul Harnden.

“‘Or I could wear something like my favorite person, Paul Harnden, but that’s probably not dressed up enough,’” Diehl recalls her saying. “And I was like, ‘Yeah, maybe not, but wear it and when you get here, we can always see.’”

“Sometimes, when you get somebody like that, who has taken so much time to hone her personal style, you’re almost an idiot to try and improve upon that in five and a half minutes,” Diehl said.

Amen to that, we say.

Television personality Piers Morgan and actress Susan Sarandon have had a playful argument on Twitter this week over the latter’s ample cleavage at this year’s SAG Awards.

It all kicked off on Thursday when Morgan deemed Sarandon’s choice of outfit inappropriate given she was presenting an ‘In Memoriam’ tribute at the Monday ceremony. Sarandon responded with a tongue-in-cheek Twitter tribute to Morgan featuring a cleavage-heavy photo of her younger self in The Rocky Horror Picture Show. He in turn responded with his own semi-clothed post, dedicating it to Sarandon. Of course, as is the nature of social media, many came out in support of each camp, prompting Morgan to issue a clarification.

“Just for the record, @SusanSarandon, I think your cleavage is magnificent. I’d just keep it hidden for “In Memoriam” tributes. Love Piers x” he posted on Twitter.

Fans of Sarandon, however, have had the last word, posting photos of their own cleavage in solidarity with the 69-year-old star.

“Shaming women (Piers Morgan)? Really?! I love (Susan Sarandon) and her boobs all day long,” posted Twitter user Ali Cobrin, accompanied by a photo of her own cleavage.