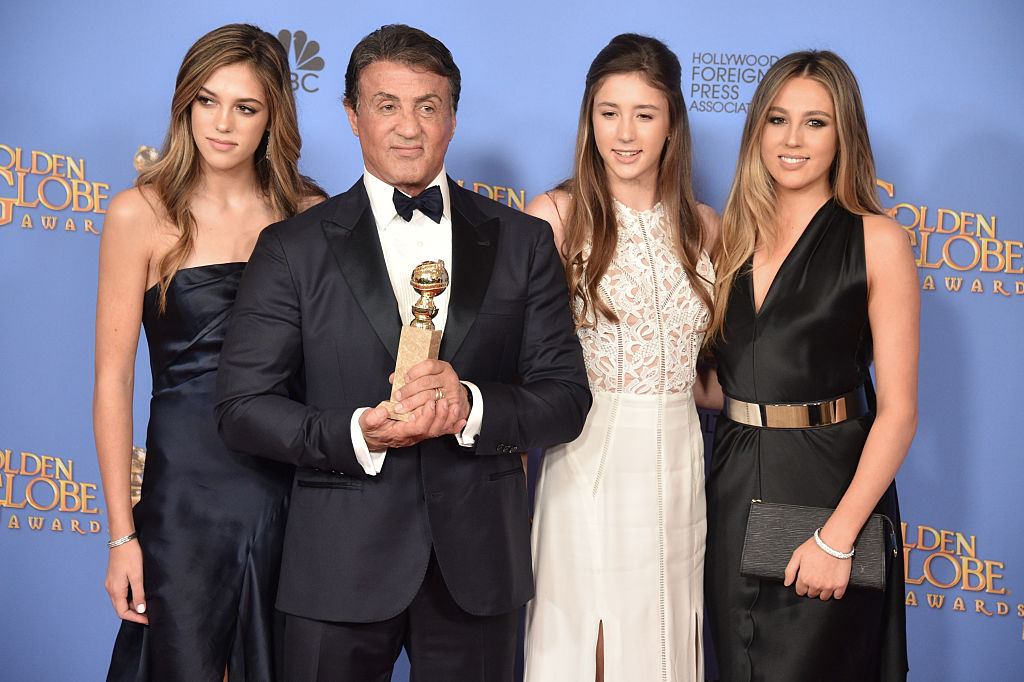 Move aside, Gigi Hadid and Kendall Jenner. There’s some new celebrity spawn on the block and they’re poised for international stardom.

Veteran actor Sylvester Stallone has been back in the public eye again recently thanks to his impressive turn in Rocky reboot Creed.

While his skilful performance is winning him accolades at awards shows, his daughters are grabbing the headlines.

Sophia, Sistine and Scarlet are Stallone’s three teenage daughters with his wife of 18 years, Jennifer Flavin.

Young, glamorous and well-travelled, the trio are garnering quite the following on their respective social media accounts.

Plus, the phrase ‘Sylvester Stallone daughters’ has become a suggested search term on Google after their recent outings at their father’s various movie premieres.

While the girls are close with their father, he said in a recent interview they’re not exactly fans of his movies.

“They hate my movies,” he said on The Jonathon Ross Show.

“They go, ‘Rambo, ew! Does he ever take a shower? Does he have to stab everyone? He has issues, he has seriously social issues!’”

Regardless of their taste in cinema, the Stallone sisters certainly have the Hollywood pedigree required to become big stars.

Eldest sister Sophia underwent a heart operation in 2012 for a cardiac malformation. At the time, Flavin told Hello! magazine Sophia was “the love of [Stallone’s] life” and the “the one that most resembles her father”. Sistine is a model signed to IMG. She has 82,000 Instagram followers. The youngest sister, Scarlet is also the tomboy of the family according to her parents. Fifty Shades of Grey star Dakota Johnson is no stranger to flashing some flesh in front of an audience.

However, she probably didn’t plan on doing so when she attended the People’s Choice Awards this week.

Ever the professional, Johnson recovered gracefully and laughed it off.

“Leslie just broke my dress,” she told the audience. “Well, it’s not like nobody here hasn’t already seen my boobs.”

Watch from the 1:35 mark to see her slick recovery.

It was hard to miss pop star-turned-actress Lady Gaga at this year’s Golden Globes. In a Marilyn Monroe-esque get-up, she bumped Leonardo DiCaprio, nabbed an award for her role in American Horror Story: Hotel and generally sent the internet wild.

However, in all the excitement many missed something major about Gaga’s appearance.

Here’s a photo of her at last year’s Emmy Awards.

And here she is at this week’s Golden Globes.

Notice the difference? No tattoos.

Gaga enlisted the help of American Horror Story makeup genius Mike Mekash to cover them up for her big night.

Nothing like a bit of ‘now you see it, now you don’t’ magic to elevate your red carpet attire.

Ever dreamed of looking like a Mexican drug lord? Today is your lucky day.

In particular, sales of a shirt that is a replica of the one worn by El Chapo in his photo with actor-turned-journalist-Sean Penn is selling out.

Known as the ‘Fantasy’ shirt, sales of the blue-and-grey-striped shirt actually crashed the website.