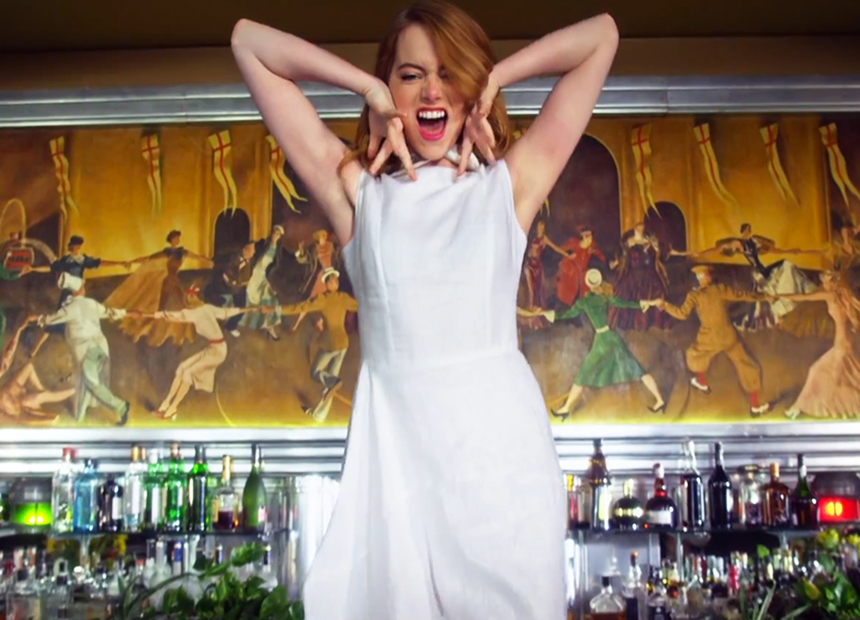 Emma Stone has gone off the rails in the most spectacular way possible.

Don’t worry, she’s not in rehab, nor is she pulling a Joaquin Phoenix and ditching acting to become a rapper.

Instead, it’s all in the name of art for a wonderful new music video from Arcade Fire member Will Butler.

The song, ‘Anna’, is a marvellous, toe-tapping tune about – surprise – a girl called Anna.

In a white cocktail dress, pink lipstick and retro sunglasses, Emma plays a crazed woman we can only assume is Anna running around a cruise ship and doing outrageous things we all wish we could do but are too scared to.

The clip is essentially a Wes Anderson movie on crack and we’re all better off for having watched it.

It starts off normally enough with Emma strutting around an expensive cruise ship:

Then it escalates when she licks a sailor’s face and he is 100 per cent okay with it:

She follows that up with some fairly terrifying hallway-roaming:

Then she eats money because she can:

After that she does one of the most epic piano solos of all time and rocks our world and then pulls this face:

Finally, she makes a series of men carry her around in a ball gown before she ends the clip lying on top of a bed of men because she is Emma Stone and this stuff is probably a daily occurrence for her:

It’s confusing, appealing and wonderful all at once. Watch it below or regret it forever.

Beyonce and Jay Z are really tying the room together

Music power couple Beyonce and Jay Z have just moved into a new mansion and it might look a little familiar to movie fans.

The $45-million Los Angeles home, which the pair are renting for a reported $150,000 a month, was the home of Jeffrey Lebowski in The Big Lebowski.

Bey and Jay are big fans of the Jeff Bridges movie, with Bey featuring a French dub of some of Maude Lebowski’s (Julianne Moore) quotes in the movie in her song ‘Partition’. And here it is in the movie: Fingers crossed for a Lebowski-themed music video from Beyonce.

Cate Blanchett is back on the press circuit again, promoting her new movie Carol.

Accompanying her on the road? A pair of very unusual hot pink glasses with blue-tinted lenses. We don’t hate them, it’s just they look a little familiar:

Is Cate paying tribute to Walter White? Possibly. As long as she’s not doing an homage to Ryan Gosling in Blue Valentine we’ll be okay.