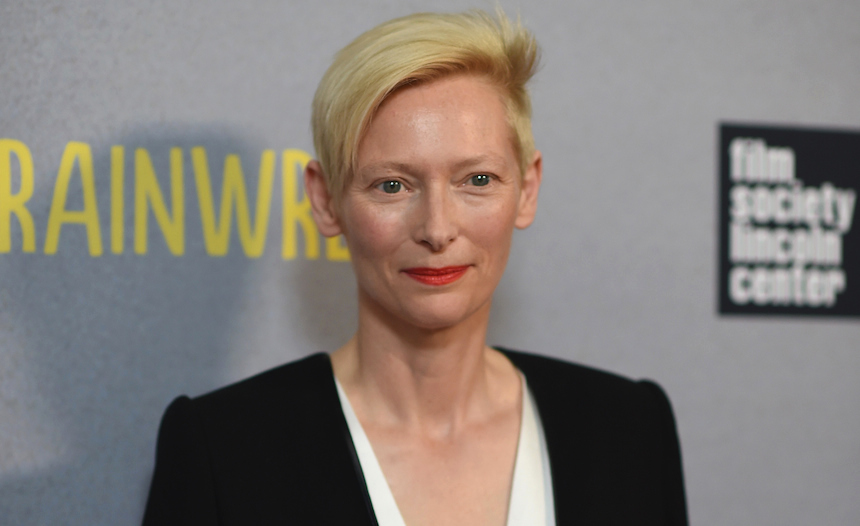 Who knew Tilda Swinton’s most shocking role yet would involve playing a magazine editor in a rom-com?

The quirky thespian, whose distinctive look makes her a favourite for intense dramatic roles, has undergone a complete transformation for her latest role in Amy Schumer’s Trainwreck.

While she’s played an elderly woman in The Grand Budapest Hotel, a White Witch in The Chronicles of Narnia and a flame-haired social worker in Moonrise Kingdom, it turns out all Swinton needed to do to shock audiences was put some bronzer and eyeliner on.

To tackle the role of Dianna, the editor of a fictional men’s mag, Swinton donned a blonde wig and layers of fake tan – a stark contrast to her typical fair-skinned, short-haired and bare-faced look.

“It’s fun to dress as someone different and this woman looks, frankly, like a lot of women I pass on the street every day, the women who go for that particular tandoori tan and the eye make-up and hair,” Swinton told The Mary Sue.

“But for me, that look is pretty extreme.”

That’s saying a lot coming from a woman unafraid to wear cloudy white contacts and a silicone rubber face mask (as she did in The Grand Budapest Hotel).

As an ode to just how versatile Swinton truly is, check out some of her other movie looks from the past five years:

She’s known for her glamorous look, but reality star Kim Kardashian has done what not many other women dare todo: go makeup free. On a magazine cover.

The typically high maintenance star has posed for Vogue Espana in her pyjamas without a lick of makeup (or so she claims) and the results are surprisingly gorgeous.

Kardashian is famously followed around by a glam squad of at least three people and is married to fashion icon and rapper Kanye West, so getting her to swap mascara for pyjamas was no small feat.

There’s one thing the controversial starlet couldn’t do without however – she managed to keep her 15-carat engagement ring firmly on her unpolished finger. ‘Hydrophobic’ clothing makes stains a thing of the past

A UK clothing label has introduced a range of un-ruinable clothing to make soy sauce stains nothing but a distant memory.

British brand Reality Dreams offers a “hydrophobic” option for all of its t-shirts and jumpers. This involves coating the fabric with a treatment that repels anything liquid.

“Virtually any spill can be rinsed clean away with just plain water. No rubbing, wiping or detergent needed.  Simply pour on a little water and job done!” the brand’s official site promises.

See the cool effect below and say goodbye to your dry cleaner because the company ships worldwide.

Tilda Swinton’s most incredible transformation yet