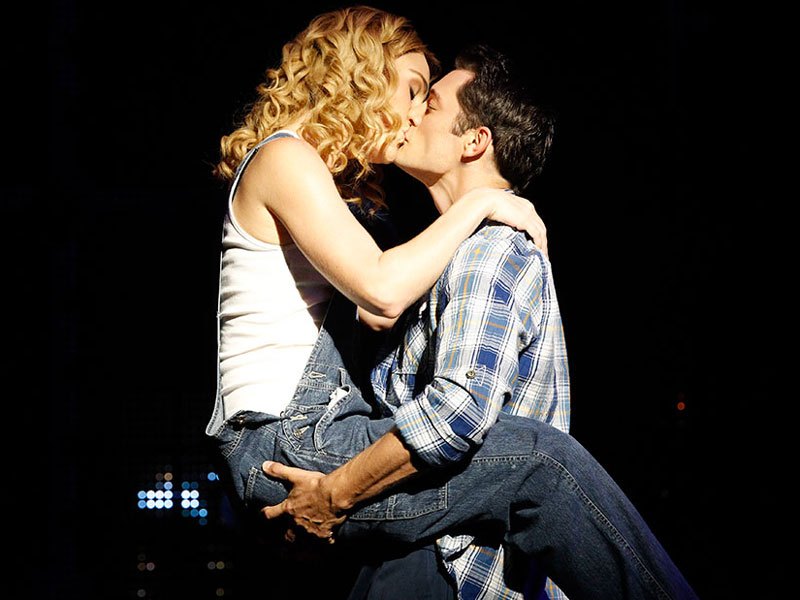 Musicals. Stage musicals. You know what to expect right – all singing, all dancing, all smiling, jazz hands right?

It certainly won’t be 10-metre tall projections of a couple having a quick shag. Right?

If you’re after a traditional musical experience, Ghost really, really isn’t that.

But if you’re after magical stage craft that sees people flying around seemingly unsupported, cast members stepping through furniture, and objects levitating of their own volition … plus, yes, big video projection sex, this is the musical for you. Or rather the show for you, because Ghost is almost the anti-musical.

Date musical feels like a better term and Ghost really is an excellent date musical.

You won’t leave humming – you will leave this show loving, loving the idea of love.

This is the show designed to get emotions (and possibly libidos) swelling without troubling any higher brain functions.

The show has been adapted by Bruce Joel Rubin, who won an Oscar for the film’s script, and he is clearly a believer in the maxim if it ain’t broke, don’t fix it, because Ghost The Musical, is Ghost the movie onstage.

The movie’s plot, as described on IMDb, blends seamlessly with the live show: “After an accident leaves a young man dead, his spirit stays behind to warn his lover of impending danger, with the help of a reluctant psychic.”

Even if we had room for the 750-word synopsis, it would still hold true. Beat for beat, scene for scene, Rob Mills for Patrick Swayze.

The film is beloved by audiences, particularly female audiences and from the moment you enter the theatre it is clear that women are the target audience for producers.

They want girlfriends, wives and hens nights to flock to this show, and with good reason.

Cardboard cut-outs in the entry foyer let you sit at the pottery wheel with Sam, while male models sat astride actual pottery wheels at the show’s Sydney premiere, awaiting celebrities to join them for a salacious snap, perhaps hoping they could spin up a shirt.

Past the ushers and into the seats you will find two shows – the stage musical recreating the movie and the building-high video screens playing out a silent movie that should have been titled ‘Fifty Shades of Ghost’. Millsy and Jemma Rix star in both and commit to the odd cheesy sexy vibe with admirable gusto.

On top of the familiar script, the songs themselves are passable – the only song that will stick with you is traditional earworm Unchained Melody, riffed beyond Righteous Brothers recognition throughout the show.

The central pair nail every note, every line and they also deliver the vital chemistry. Wendy Mae Brown is impressive as Oda Mae Brown, again with a heavy hint of Whoopi Goldberg.

Ultimately though, we are here for a tear-filled, musical trip down memory lane and Ghost delivers, with added stage magic, but best of all it’s a date musical.

You may love the show, you may love your date, but you will walk out of Ghost a little bit more in love with love.

See a trailer for the musical below: Why this musical has a mostly female audience