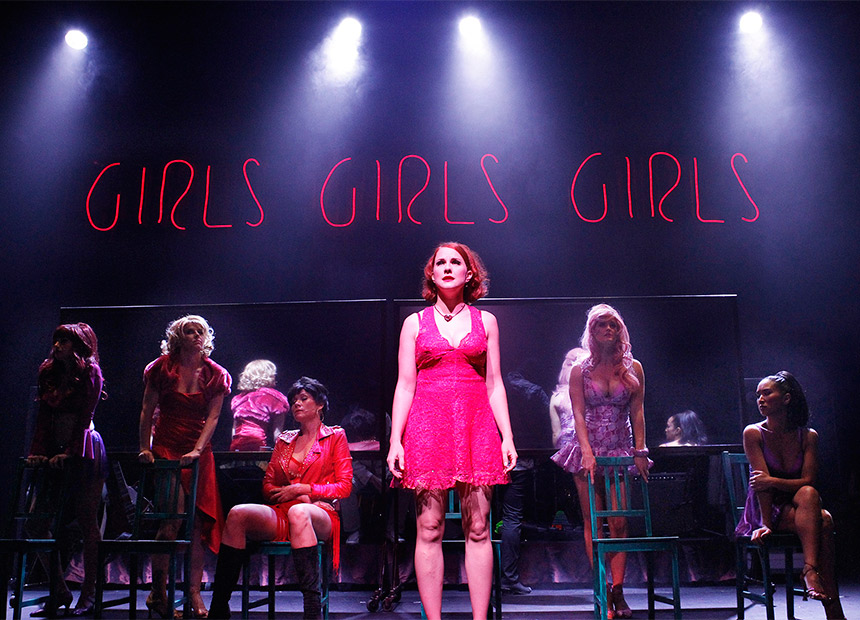 The Playhouse at the Victorian Arts Centre until March 7.
The Illawarra Performing Arts Centre in Wollongong, NSW from March 11-15.
Purchase tickets here.

Verity Hunt-Ballard is a brilliant and delicious force of nature as a New York dancer for hire in the new production of Sweet Charity, directed by Dean Bryant.

The musical premiered on Broadway in 1966, after which it was nominated for nine Tony Awards, and also ran in the West End.

· Box office: a sequel with substance
· The Oscars’ Oscars: Best cinema of the past 20 years
· Virgin territory: why 50 Shades is spankingly awful
· ‘What We Did On Our Holiday’ a rollicking hit

It was adapted for the screen in 1969, with Shirley MacLaine playing the lead and Bob Fosse directing and choreographing.

The story is based upon Federico Fellini, Tullio Pinelli and Ennio Plaiano’s screenplay for the black and white film Nights of Cabiria.

While that movie focuses on the vicissitudes of an ever-hopeful prostitute, Sweet Charity is primarily set in a Times Square dance hall.

The lead character, Charity, and her co-workers at the Fandango aren’t exactly enamoured with their place of employment, but they have no other means of support.

Charity has no family, no education and no skills but she remains buoyant, determined to think the best of people.

We watch her through the prism of her colleagues and the special men in her life.

There’s the boyfriend she has at the beginning of the production, a famous Italian movie star with whom she has a chance encounter and a conservative accountant, who just maybe Mr Right.

The energy levels in this show are what elevate it to a higher plane.

Hunt-Ballard sings and dances up a storm as Charity Hope Valentine, an unbridled bundle of perpetual motion. She makes the role her own and is sassy personified.

No wonder she claimed a Helpmann award for her endeavours, as did director Bryant and choreographer Andrew Hallsworth.

They are all highly deserving.

Not that Martin Crewes is any slouch either adopting the personas of the three men in Charity’s life – Charlie, Vittorio and Oscar.

Crewes has a big voice and a strong stage presence.

While he and Hunt-Ballard are the dominant players, Deborah Krizak should not be easily dismissed as Vittorio’s needy girlfriend and Charity’s dance hall friend.

The ensemble, too, continue to shake things up and roll their eyes at Charity’s flights of fancy.

With a highly adept five-piece orchestra on stage, performing exquisite numbers like Big Spender and The Rhythm of Life, Sweet Charity is a richly polished show that shouldn’t be missed.