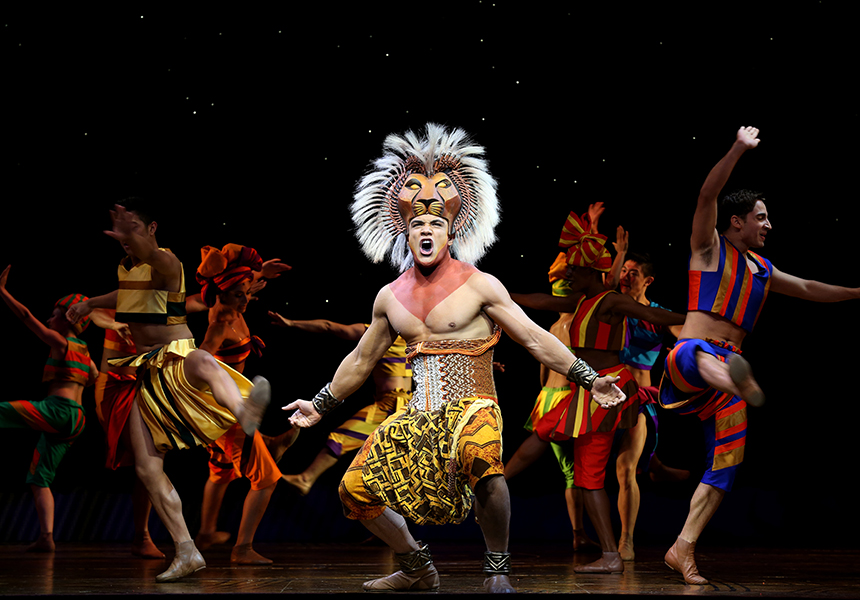 Even if you’re one of the 75 million people who have already seen The Lion King Musical, the show is still just as special the second, third or fourth time around.

Speaking to The New Daily at the premiere in Melbourne, Simba, played by New Zealand’s Nick Afoa admits that prior to The Lion King’s debut in Sydney in 2013, his musical theatre experience extended to “maybe my high school play” – not that you can tell.

Growing up, the Disney film by the same name was Afoa’s favourite movie, and while he felt “shaky and very nervous” before walking (or swinging) out on to that stage for the first time in Sydney, the cast is like one big supportive family.

Afoa represented New Zealand in rugby before moving across to the stage. Between performances in Melbourne, he says he’s keen to see some rugby union and league games and wants to “make the effort” with AFL too.

Now entering its 18th year, you would expect The Lion King to be a fine-tuned performance of perfection, and honestly, it doesn’t disappoint.

Here are the top 10 moments of the show:

For those who haven’t seen the Lion King 2 (oh yes, they made a sequel), this song is a beautiful new edition to The Lion King repertoire. Rafiki, Simba and the ensemble perform the song while a giant jigsaw of Mufasa’s face comes together to compel Simba to return to Pride Rock. The use of torches on stage only adds to the eerie feeling.

The Lion King’s choreography is like ballet meets hip-hop. Jamaican choreographer Garth Fagan uses dance to tell a story. The hunting lionesses leap and spin as a pack, the hyenas dance as an army preparing for a battle and dancers dressed as giant flowers help portray the romance in ‘Can You Feel the Love Tonight’.

It’s amazing how so many people in bulky costumes plus a giant rock are able to move in sync across a small stage. The grandeur of this scene is aided by the orchestra’s intense and dramatic music. Director Julie Taymor also uses silhouettes to help bring some of the finer details of the costumes to life.

Perhaps one of the greatest duos in cinematic history (I may be exaggerating here), the pair provides some comic relief in a show that could otherwise be quite dark. Children in the audience who may not understand the more intricate parts of the story (the movie was influenced by Shakespeare’s Hamlet and the biblical story of Moses) will appreciate the boldness (and fart jokes) of these unlikely friends.

Many may remember this scene from the Disney film as the moment your childhood innocence was taken away. And while it’s still devastating to watch Simba’s dad trampled to death by a herd of wildebeest, there’s an art to how the orchestra is able to build the anticipation so quickly and in such a way that part of you is still hoping that this time, maybe, he won’t die. You’ve also got to hand it to Taymor for being able to portray an entire stampede on a small show stage.

Buyi Zama from South Africa has been playing the role of Rafiki for well over a decade. The mandrill spirit-guide steals the show with her pipes in ‘The Circle of Life’ and manages to make the audience laugh with her ramblings in an African click language. Rafiki’s bright, witch doctor-like costume and cheeky demeanour mean you simply can’t take your eyes off her.

There’s something about listening to a group of singers perfectly harmonising African music that makes you want to listen to it forever. Often used as fillers while the rest of the cast gets ready for the next scene, the humming and chanting that echoes around the theatre is not only soothing, but also tricks you into thinking you really are in the Serengeti.

Apart from Rafiki, every costume has some kind of add-on. Zazu and Timon are puppets with their puppeteers becoming part of the show, the giraffes are on stilts and the lions have masks. Taymor was also responsible for the intricate costumes that use elements from the Maasai tribes of Kenya as well as Bali and Japan. While some of the finer details of the costumes may not be visible to the audience, Taymor says that the intricate beading or patterns help the actors get into character.

Mufasa’s evil brother, played by Kiwi Josh Quong Tart, owns the stage. It is so easy to hate the cunning but cowardly lion that makes the hyenas do his dirty work. Inspired by a Japanese samurai soldier, his costume creates a skeletal silhouette that adds to the evil demeanour as he struts around the stage.

When you hear that first note from ‘The Circle of Life’ reverberate around the theatre the hairs on the back of your neck stand on end. The opening is beautifully choreographed with the whole African safari running down the aisles and leaping across the stage. It’s simply a scene that overwhelms your eyes and your ears. Even the actors on stage – who have heard the song at least 500 times – can’t get enough of it, with Afoa commenting: “it’s still so exciting. We know it’s someone’s first night out there and relive that every show”.

The Lion King is at Melbourne’s Regent Theatre until 9 August, 2015.
Tickets can be purchased here.