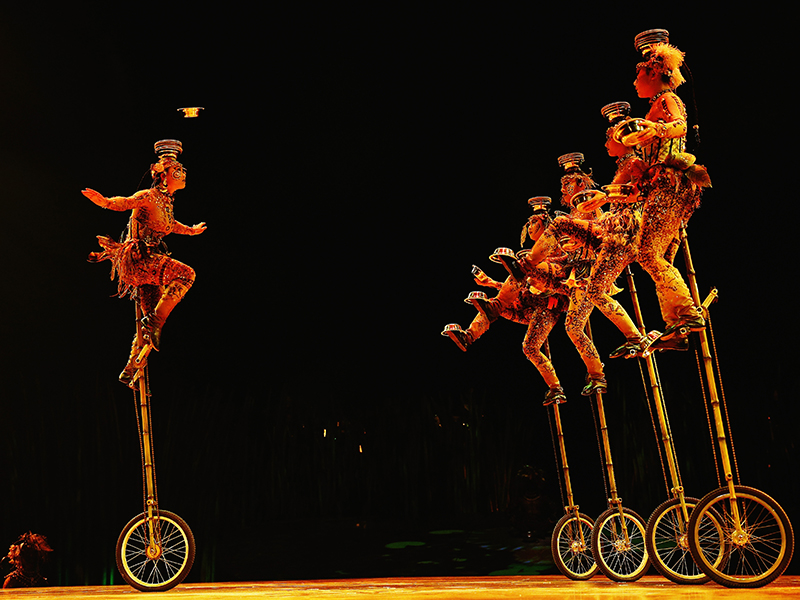 Montréal’s Cirque du Soleil has been defying physiology and contorting its performers into impossible positions for three decades. And its latest show, TOTEM, is no exception.

Written and directed by Robert Lepage, the show follows the theory of evolution, through to poking fun at the self-obsessed technological society we live in today.

Opening with one of Darwin’s giant turtles from the Galapagos Islands and insect-themed ‘flying’ acrobats, the show immediately leaves the audience gasping.

The stage, which includes a 4,500kg steel, hydraulic bridge, brings the stories to life with projected videos of oceans, swamps and volcanos.

There is a little less bravado and emotion than past performances, but much of the old Cirque magic is still there.

With acrobats combining tight-rope walking with trampolining, high rise trapeze artists literally trusting their partner with their life and women on unicycles kicking (and catching) bowls over their heads, the term “circus freak” does come to mind.

Throughout the show, you can’t help but ask yourself: “is there a single thing they could have done to make that more difficult?”

The carefully crafted costumes and masks, designed by Hollywood costume designer Kym Barrett, reflect the show’s journey through human history, while the live music, drumming and sound effects are cleverly incorporated into the performance.

Of course there’s juggling and manipulation but it’s not as you know it.

The dance finale is a little bit of a let down but it’s forgivable given that you’ve just watched two hours of strong, rubbery humans risking their lives as they swing 30 metres up in the air.

Cirque du Soleil’s TOTEM is in Melbourne at The Grand Chapiteau, Flemington Racecourse until March 15, 2015. Tickets can be purchased here.

TOTEM moves to Brisbane from April 10, 2015, before heading to Adelaide in June and Perth in July.