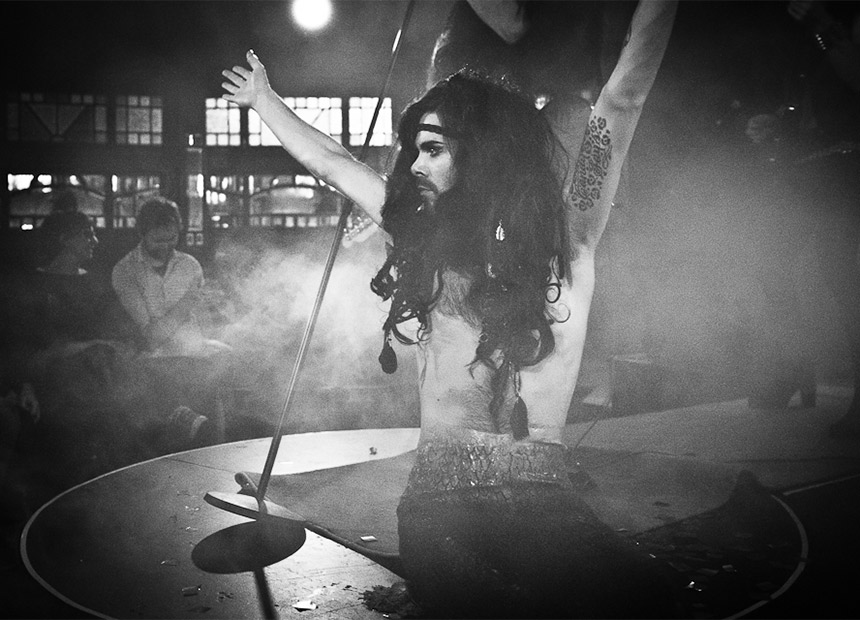 Melbourne-based performance artist and pole dancer extraordinaire Anthony Cleave, aka Agent Cleave, might have started out doing the rounds of the city’s pop-up gay parties, but these days he’s on the velvet cusp of big and bold things indeed, just like his high heels, with Canadian electronic star, DJ and fellow out-there performance artist Peaches a firm backer.

Embracing an enticing air of gender and sexual ambiguity along with old-fashioned cabaret glamour mashed with trashy rock ‘n’ pop roar, Cleave has his sights set on conquering Australia’s alternative arts scene. Debut solo gig Show Stopper, showcasing the anthems of musical heroines including Peaches, PJ Harvey, The Divinyls and Garbage, was a breakout hit at last year’s Melbourne Fringe, with a follow-up New Year’s performance at the Falls Festival.

Cleave will strap on those unfeasibly high heels for an encore of Show Stopper at Melbourne’s Midsumma Festival this month before taking the show on the road to Sydney’s Mardi Gras, on the back of his critically acclaimed turn in queer independent theatre group Sisters Grimm’s razor sharp and outrageously wrong Gone with the Wind satire Summertime in the Garden of Eden.

Hardcore stardom surely awaits, and if you’re not on board yet, you should be. Show Stopper is a cracking performance that ably demonstrates what Agent Cleave has to offer. “They’re kinda guttural expressions of love and misunderstanding,” he says. “I’m trying to express that animal pain of love and desire.”

The stage name sprung from Cleave’s love of British TV series Get Smart and its memorable ‘Agent 99’. “I wanted to reference both glamour and trash, with ’60s eye make up, the silhouette of beautiful Italian women, film noir and metal bands from the ’80s, trashy roadhouse rock ‘n’ roll,” he says.

Fresh out of high school, the now 30-year-old Cleave got an acting agent and scored some commercial work, a couple of episodes on Blue Heelers and a small part in Hating Alison Ashley starring Delta Goodrem. “It’s all been downhill from there,” he laughs.

Hardly. Cleave’s love of performance was always closely tied to costume and fine art, with the acting career put on hold so he could take up painting at the VCA, where the late-night partying went hand-in-hand with his studies. “I was trying to figure out a lifestyle for myself where I could be creatively fulfilled,” he says. “I grew up poor we never had any money to worry about, so I thought I may as well enrich the culture of my life.”

Forming a firm friendship with performance artist Erin Tazmania, host of Fitzroy’s Gay Shame party, Cleave credits her as guiding the beginnings of his glittering career. “We lived together for a time and loved dressing up. My style was always very maudlin and gothic and she though that was hilarious.”

His friendship with costume designer Jess Daly introduced him to the provocative musician and performance artist Peaches, giving his career a rocket-boosted kick in the pants.

Initially attracted to Daly’s moves at Big Day Out, Peaches called on the pair for back up when she returned to Australia on a nationwide DJ tour. “I showed up for the first gig at the Corner Hotel and did my solo show,” Cleave says. “I was only booked for one or two spots, but she really loved what I did and ended up booking me flights all over Australia.”

The collaboration led to team-ups in New York, where they played at Webster Hall, and in Berlin, where Cleave and Daly crashed on Peaches living room floor for two months. “We’d kind of run out of money but every night she had a different gig for us, forcing our gothic go-go-dancing on the city. That was a crazy exciting time and from there Agent Cleave just made sense to me. What else am I gonna do with this life?”

Sisters Grimm founders Ash Flanders and Declan Greene’s Summertime in the Garden of Eden saw Cleave tread the boards as bearded Southern belle Daisy May, alongside old friends Bukkakis and Tazmania. Starting life as a short piece performed as part of monthly art collective The Last Tuesday Society, it was so well-received they fleshed it out and re-staged it in a shed in Thornbury, before going onto wildly successful runs at St Kilda’s Theatre Works in Melbourne and the Griffin Theatre in Sydney.

Cleaves would love to work with Peaches again, as well as team up once more with Maude Davies of Burlesque Hour and My Life in the Nude infamy. “Maude’s a fantastic performer, woman and mind,” Cleave says. “There are a lot of fabulous personalities in Melbourne, queer-wise, and while the club scene doesn’t have much going on at the moment, professionally and creatively there’s a whole pool of really amazing, talented people.”

We count Agent Cleave amongst them and are waiting with baited breath to see what he does next. “It’s a great place to be, to feel that my ideas are worth it, and people are interested in what I have to say.”

Agent Cleave: daring you to take a drag