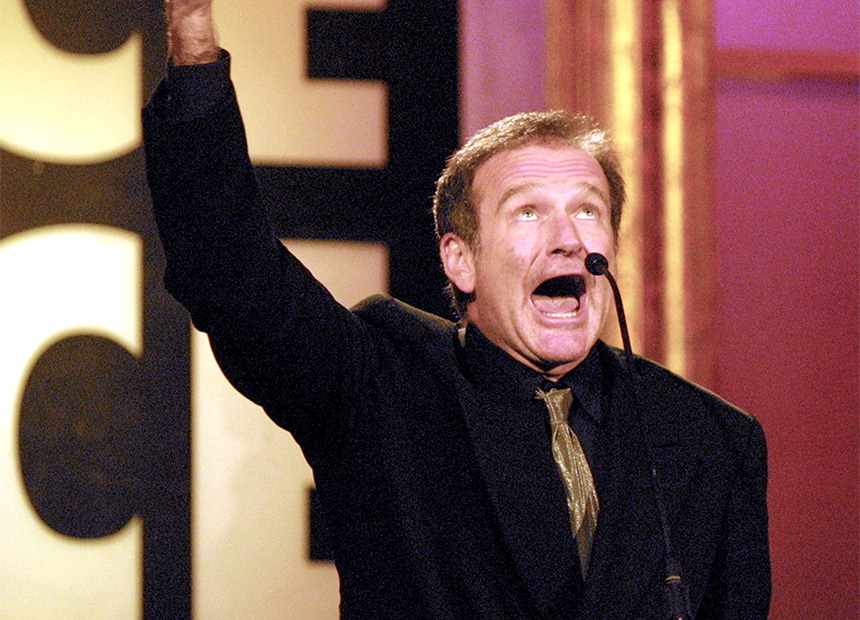 Comedy legend Robin Williams’ death from an apparent suicide this week, aged 63, has shocked and saddened the world. Rarely has the passing of a notable figure – much less an actor-comedian – drawn such an outpouring of emotion.

After this initial period of grief, the natural inclination is to revisit the reasons why we have loved Williams for so long.

Emerging as a prodigious and unique comedic talent in the late-1970s, Williams established himself as one of the greatest stand-ups in history, and finally rising to movie superstardom in a wide variety of roles.

He is almost unanimously regarded as one of the best comedians and actors the world has known. We’ve handpicked his funniest moments from the stage and the silver screen.

A young Robin Williams on the Home Box Office (1977)

Williams was a relative unknown when this performance at the Home Box Office was filmed in 1977. New to Los Angeles and just 25 years old, he gave the audience a generous helping of what they could expect from him for the ensuing three-and-a-half decades: crazy impressions and accents, fast-paced riffing and manic improv comedy.

Already established as a stand-up powerhouse and a bona fide television star on Mork & Mindy, Williams’ first appearance on The Tonight Show was among Johnny Carson’s legendary talk show’s most famous guest slots. Williams is zany, unpredictable and goes off on myriad tangents – but the results are side-splitting.

The 1986 HBO special An Evening at the Met, which won a Grammy after being released as the album A Night at the Met, is arguably Robin Williams’ most iconic stand-up performance. Good Morning, Vietnam and feature film superstardom were still a year away, and Williams was at his peak as a stand-up: frenetic, raw and riotous. His routine about alcohol and drugs – drawn largely from his own painful personal experiences – is the best-loved part of one of the most blistering stand-up shows of all time.

Williams was a regular host and performer for shows staged by Comic Relief, the charity organisation that raises funds and awareness for homeless people. This routine showcases his ability to jump seamlessly and frantically between unrelated topics, bounding from Russian-US politics and stealth bombers to cocaine and Nintendo in a hysterical performance.

Williams was a big sports fan and a passionate supporter of baseball’s San Francisco Giants. He performed many routines about various sports, but perhaps his greatest was about a pastime he hated: golf. Williams’ take on the invention of golf in Scotland – complete with accent – during his outstanding Live on Broadway show in 2002 has been plastered all over sports websites around world in recent days as people from every field mourn his death.

The comedian excelled in a number of movie roles as his stand-up and television careers flourished, debuting in Can I Do It ’Til I Need Glasses (1977) and starring in the critically-acclaimed The World According to Garp (1982). But his status as one of the world’s greatest comedic actors became entrenched after his breakthrough performance as eccentric radio announcer Adrian Cronauer in the 1987 war-comedy Good Morning, Vietnam. Williams was nominated for a Best Actor Oscar for his performance, which was a forerunner to many of his roles that combined comedy with a hint of pathos.

Williams scooped another Oscar nomination for his portrayal of Parry, a delusional homeless man on a mission to find the Holy Grail, in the romantic comedy-drama The Fisher King. Williams combined the madcap traits of his character with moments of tenderness to solidify his reputation as one of Hollywood’s finest all-round actors, not just a master of chaotic comedy.

In Aladdin, Williams set the benchmark for voicing animated characters with his portrayal of The Genie in the 1992 Disney animated feature. His off-the-wall depiction featured many of his stand-up trademarks, and he ensured Aladdin was one of the first animated films aimed at children that genuinely appealed to adult audiences.

Depicting an unemployed voice actor whose wife (played by Sally Field) leaves him, Williams’ character, Daniel, disguises himself as an elderly nanny in order to spend time with his children. Mrs Doubtfire was a runaway box-office success, while also earning Williams a Golden Globe for Best Actor in a Musical or Comedy. Pairing slapstick with Williams’ expertise in different voices and a liberal tugging of the heartstrings, Mrs Doubtfire remains a guilty pleasure.

Often overlooked amongst Williams’ glittering and varied filmography, his performance as drag queen club owner Armand Goldman in The Birdcage is undoubtedly one of his funniest. At a time when LGBT-themed movies weren’t exactly common, The Birdcage was a big box-office success and was lauded by critics; this brilliant scene with Williams and Nathan Lane, who played Armand’s partner Albert, shows why.

Amber Heard’s sister and friend give evidence
‘Should have been a penalty’: Boy crash-tackled by PM gives his verdict
Man arrested at NSW school for bestiality
Concern about COVID-19 deaths in aged care
Oceans hotter and more acidic in 2021 as sea levels, human-induced greenhouse gases rise: WMO
Portugal sounds alarm on deadly monkeypox cases
Jonas Kaufmann could be the next Pavarotti
Today's Stories

Now we remember the laughs