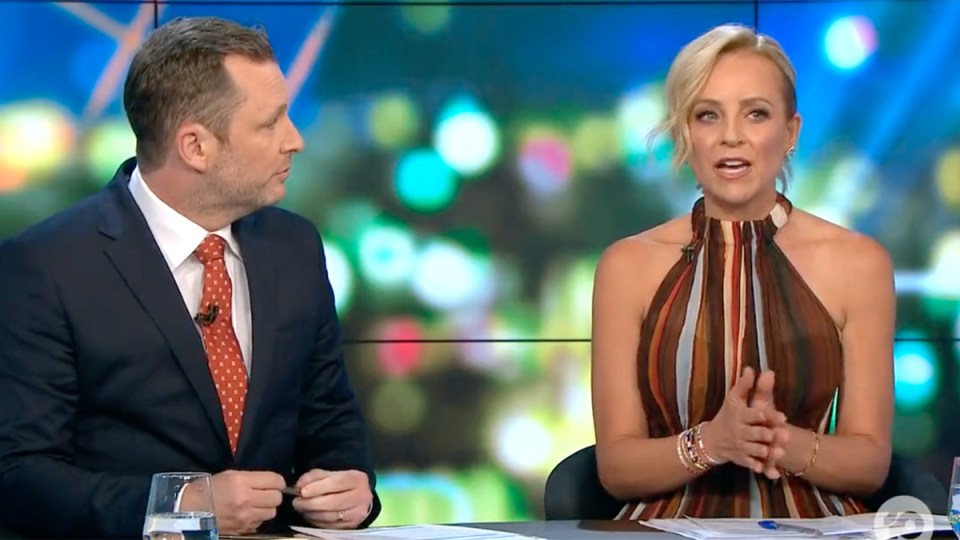 Van Onselen and Bickmore during last week's heated debate on The Project.

Political journalist Peter van Onselen says he regrets a column blasting  former Australian of the Year Grace Tame as “rude and childish” for refusing to smile at last week’s photo op with the Prime Minister.

In a podcast interview with Tom Ravlic on the Critical Line Item with Tom Ravlic, van Onselen said on reflection of the uproar that followed the incident, and his column, he no longer felt his comment piece in The Australian newspaper was necessary.

“I think it was probably unnecessary for me to bother to write the opinion piece. To say all of those things. I can just think it,” he said.

The column followed the awkward encounter between Prime Minister Scott Morrison and Ms Tame at an Australian of the Year morning tea at The Lodge in Canberra last week.

Ms Tame, who attended with her fiance Max Heerey, sparked an outcry as she stood stony faced during a photograph with Mr Morrison and his wife Jenny, and appeared reluctant to shake his hand.

Ms Tame, who was named Australian of the Year for her trail-blazing advocacy on behalf of sexual assault victims, has been a vocal critic of Mr Morrison and his government’s handling of women’s safety issues. She was also groomed and raped by one of her teachers as a teenager.

Van Onselen, who is a contributing editor at The Australian, used his column to ask why Ms Tame would bother to attend the event only to be “ungracious, rude and childish”.

“She didn’t have to play the role of court jester, or be a fake. Just be a decent human being, that’s all. If that wasn’t possible, why bother to attend at all? At his Canberra house no less. It isn’t like the person who lives there wasn’t going to be there,” he wrote.

The article sparked a heated debate on the Ten Network’s The Project later in the day. Van Onselen, who is also the network’s political editor, was a fill-in co-host with Carrie Bickmore and journalist Amy Remeikis, who was a guest.

“Your column today [was] devastating to so many people,” Remeikis told van Onselen.

Bickmore also criticised some of her co-host’s language in The Australian article.

“You spoke about how she acted as a child. You know when she should have been able to act as a child? When she was a child. But she was preyed upon by a man and lost part of herself in that,” she said.

“I’m unsure how that article today helps when I’m assuming, like the entire nation, you want violence against women and children to end?”

In the podcast, van Onselen says he stands by the views he expressed. He said his regret didn’t spring from the clash on The Project.

“They didn’t change my mind. I’m still very firm, personally, of the view that [Ms Tame’s actions were] uncalled for, if I could put it that way. And inappropriate, and she shouldn’t have done it.

“That’s different I should say to saying that on reflection I wouldn’t have written the opinion piece because I didn’t like the blow back that I got, I don’t care about that. That’s not a reason I wouldn’t write it on reflection.

“Seeing how strongly people feel about it doesn’t change my view. But it probably has changed my view on whether it needed to be written.”

Rather, he said, writing the article was as bad as the actions of Ms Tame when meeting Mr Morrison.

“In a sense, me on my side of the ledger of society to write about it, became me being, I would argue – people won’t like this – as bad as Grace Tame choosing to act the way she acted, which I’m critical of.”

The chief content officer and executive vice president for network owner, 10Viacom CBS, Beverley McGarvey, told The Australian that the show “didn’t create those conversations”  – such as the clash between van Onselen-Bickmore-Remeikis – but said viewers could expect to see more robust exchanges ahead of the looming federal ­election.

She welcomed the diverse range of voices, panellists and guests on The Project, each with their “own opinion”, and denied the debate was manufactured.

“It is more competitive than ever before to get people’s attention and to get them to engage with our content,” Ms McGarvey said.