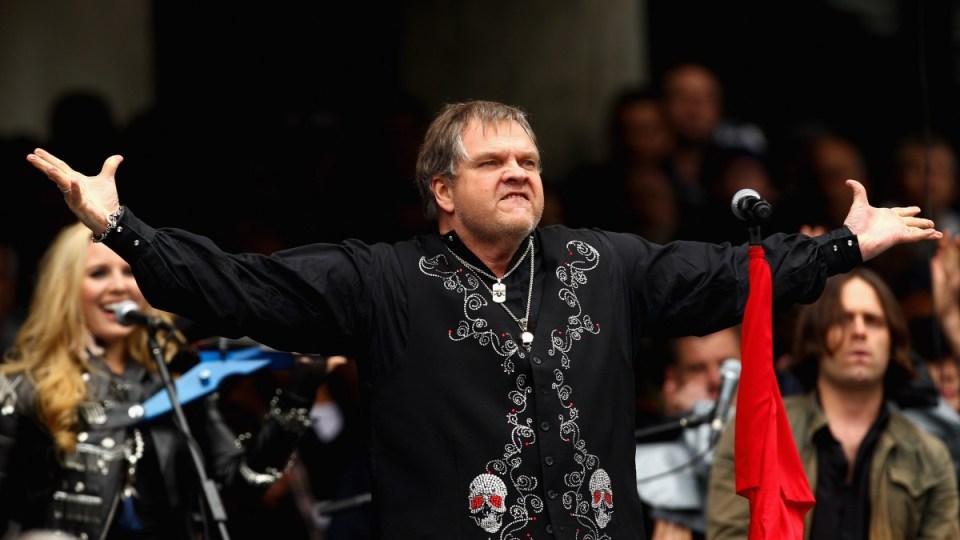 Chart-busting singer Meat Loaf, the US import whose onstage debacle at the AFL grand final lives on in infamy, has died at the age of 74, reportedly from COVID complications.

“Our hearts are broken to announce that the incomparable Meat Loaf passed away tonight with his wife Deborah by his side,” a family statement on the artist’s official Facebook page says.

“Daughters Pearl and Amanda and close friends have been with him throughout the last 24 hours.

“His amazing career spanned six decades that saw him sell over 100 million albums worldwide and star in over 65 movies, including Fight Club, Focus, Rocky Horror Picture Show and Wayne’s World.

Meat Loaf had been in poor health for some time and admitted being plagued by asthma and other conditions. He collapsed on stage during a concert in Pittsburgh in 2011. In 2003 he collapsed at Wembley Arena in London and was admitted to hospital.

According to unconfirmed media reports out of the US, he came down with COVID about a week ago and spent his last days in an ICU unit.

As to the 2011 MCG performance, the singer blamed poor sound equipment and responded to a gale of criticism by saying he was underpaid.

That stuck in the craw of AFL Gillon McLachlan, who was still livid about the incident in 2021.

“He brought shame to the MCG, the committee got rolled, he brought shame on America,” Mr McLachlan said while dressed as a Meat Loaf parody and preparing to slide into a vat of icy water at the 2011 Big Freeze charity event..

“He complained he needed 100 Harleys and he only got three, that was the reason he performed badly.

Mr Mclachlan’s blast came despite the singeer’s 2016 bid to apologise.

“From now on, no matter what happens or when it happens, there is only one person to blame and that is myself,” he said.

“Stand like a man and say I am sorry.

“I betrayed your trust, I apologise for any feelings that I have hurt. My behaviour was extremely inappropriate, immature, and lacked the respect for the people of Australia and the Australian Football League.”

While the bulky bellower lives on as something of a joke in Australia, his fans around the world never lost their appetite for his full-bodied voice and theatrical flare.

Bat Out of Hell remains one of the top 10 selling albums of all time and still holds the title of Australia’s most-bought album.

“We know how much he meant to so many of you and we truly appreciate all of the love and support as we move through this time of grief in losing such an inspiring artist and beautiful man,” his family’s Facebook statement said.

“We thank you for your understanding of our need for privacy at this time. From his heart to your souls … don’t ever stop rocking!”

The singer, whose real name was Michael Lee Aday, sold millions of albums worldwide, with the Bat Out Of Hell trilogy among his most popular musical offerings.

Hit single I’d Do Anything For Love (But I Won’t Do That) reached number one in 28 countries and earned him a Grammy award.

The rocker also played the role of Eddie in the 1975 musical film The Rocky Horror Picture Show, and in 2016 was honoured with the Hero Award at the annual Q Awards music ceremony, which he dedicated to everyday heroes and called on people to “bring love back into this world”.

While the bulky bellower’s memory will live on as something of a joke in Australia, his fans around the world stuck by him.

His career spanned more than just music, with the musician also featured in a string of films that included 1999’s Fight Club and 1992’s Wayne’s World.

Bat Out Of Hell was also adapted as a stage musical, which was written by long-time collaborator Jim Steinman and featured some of the musician’s best-loved hits.