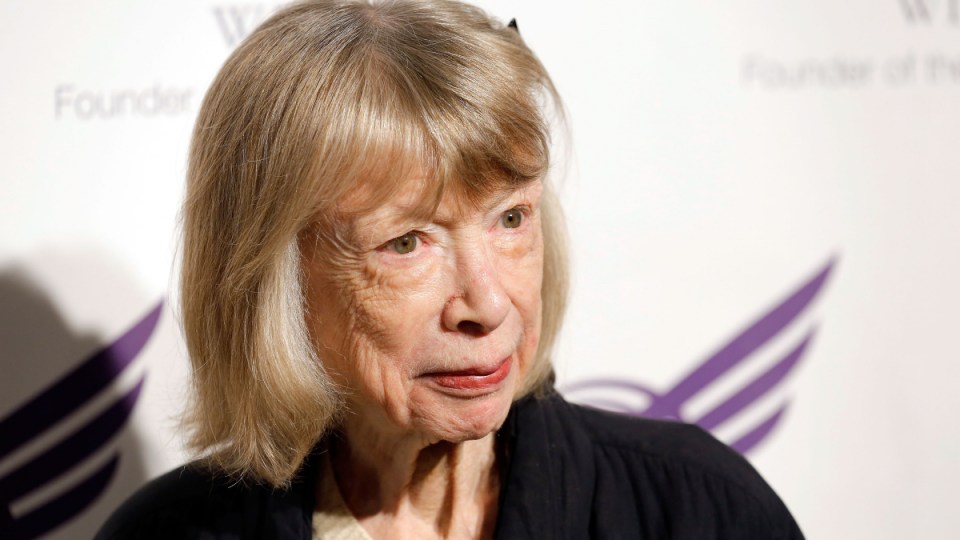 US author and essayist Joan Didion has died. She was 87. Photo: Getty

Joan Didion, the revered author and essayist whose precise social and personal commentary in such classics as The White Album and The Year of Magical Thinking made her a uniquely clear-eyed critic of turbulent times, has died. She was 87.

“Didion was one of the country’s most trenchant writers and astute observers. Her best-selling works of fiction, commentary, and memoir have received numerous honours and are considered modern classics,” Penguin Random House said in a statement.

Along with Tom Wolfe, Nora Ephron and Gay Talese, Didion reigned in the pantheon of “New Journalists” who emerged in the 1960s and wedded literary style to nonfiction reporting.

Tiny and frail even as a young woman, with large, sad eyes often hidden behind sun glasses and a soft, deliberate style of speaking, she was a novelist, playwright and essayist who once observed that “I am so physically small, so temperamentally unobtrusive, and so neurotically inarticulate that people tend to forget that my presence runs counter to their best interests”.

Or, as she more famously put it: “Writers are always selling somebody out.”

Didion received a National Humanities Medal in 2012, when she was praised for devoting “her life to noticing things other people strive not to see”. For decades, she had engaged in the cool and ruthless dissection of politics and culture, from hippies to presidential campaigns to the kidnapping of Patty Hearst, and for her distrust of official stories.

Didion reported on personal tragedy in the heartbreaking 2005 work, The Year of Magical Thinking, a narrative formed out of the chaos of grief that followed the death of her husband and writing partner, John Gregory Dunne. It won a National Book Award, and she adapted it as a one-woman Broadway play that starred Vanessa Redgrave.

Dunne had collapsed in 2003 at their table and died of a heart attack even as their daughter, Quintana Roo Dunne Michael, was gravely ill in a hospital.

The memoir was a best-seller and a near-instant standard, the kind of work people would instinctively reach for after losing a loved one. Didion said she thought of the work as a testament of a specific time; tragically, Magical Thinking became dated shortly after it was published. Quintana died during the summer of 2005 at age 39 of acute pancreatitis. Didion wrote of her daughter’s death in the 2011 publication Blue Nights.

She was a lifelong explorer and prided herself on being an outsider, more comfortable with gas station attendants than with celebrities. But she and her husband, whose brother was the author-journalist Dominick Dunne, were well placed in high society. In California, they socialised with Warren Beatty and Steven Spielberg, among others, and a young Harrison Ford worked as a carpenter on their house.

Born in 1934 in Sacramento, California, and descended from pioneers, Didion was fascinated by books from an early age. She graduated from the University of California at Berkeley in 1956 and moved to New York for a job at Vogue after winning a writing contest sponsored by the magazine.

Didion married Dunne, whom she had met at a dinner party, in 1964. Two years later, they adopted a baby girl, Quintana Roo.

Scott Morrison steps down after conceding defeat
What we loved and what were they thinking? Let’s walk the red carpet hits and misses of 2021
Today's Stories