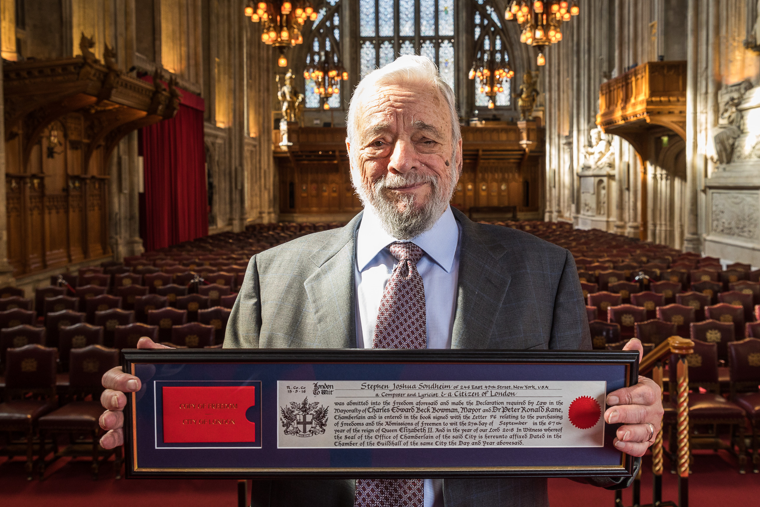 New York only recently honoured Stephen Sondheim's services to Broadway with the coveted Freedom of the City. He passed away aged 91, best known as theatre’s most revered and influential composer-lyricist of the last half of the 20th century and the driving force behind some of Broadway’s most beloved and celebrated shows including West Side Story, still on Broadway and captured in Stephen Spielberg's film adaptation out on Boxing Day. Photo: Getty Photo: Getty

The final curtain has come down on one of the brightest lights ever to shine on Broadway’s ‘Great White Way’ with the death of beloved composer and lyricist Stephen Sondheim.

Sondheim helped American musical theatre evolve beyond pure entertainment and reach new artistic heights with works such as West Side Story, Into the Woods and Sweeney Todd.

The revered star passed away at his home in Roxbury, Connecticut. He was 91.

Sondheim learnt the art of musical theatre as a teenage assistant from Sound of Music lyricist Oscar Hammerstein. He went on to claim eight lifetime Tony Awards, surpassing the total of any other composer.

Hamilton creator Lin-Manuel Miranda, who was mentored by Sondheim, has called him musical theatre’s greatest lyricist.

Sondheim’s most successful musicals included Into the Woods, which opened on Broadway in 1987 and used children’s fairytales to untangle adult obsessions.

He is also remembered for the 1979 thriller Sweeney Todd, about a murderous barber in London whose victims are served as meat pies, and 1962’s A Funny Thing Happened on the Way to the Forum, a vaudeville-style comedy set in ancient Rome.

‘Making them cry, making then feel’

“I love the theatre as much as music, and the whole idea of getting across to an audience and making them laugh, making them cry – just making them feel – is paramount to me,” Sondheim said in a 2013 interview with National Public Radio in the US.

Several of Sondheim’s hit musicals were turned into movies, including the 2014 film Into the Woods, starring Meryl Streep, and 2007’s Sweeney Todd with Johnny Depp.

His songs were celebrated for their sharp wit and insight into modern life and for giving voice to complex characters, but few of them made the pop charts.

He did have a hit, though, with the Grammy-winning Send in the Clowns from his 1973 musical A Little Night Music. It was recorded by Frank Sinatra, Sarah Vaughan and Judy Collins, among others.

One of Sondheim’s greatest triumphs was his Pulitzer Prize for the 1984 musical Sunday in the Park with George, about 19th-century French Neo-Impressionist artist Georges Seurat.

Broadway audiences were introduced to Sondheim in 1957 when he wrote the lyrics for West Side Story to go with Leonard Bernstein’s music and it became a modern classic.

The story – about a love affair between a Puerto Rican girl, Maria, and a white boy, Tony, in working-class Manhattan – was turned into an Oscar-winning film in 1961.

Sondheim was born on March 22, 1930, in New York City to affluent Jewish parents who worked in fashion. He described his early childhood as a lonely one, with servants as his main company.

After his parents split up when he was 10, Sondheim moved with his mother to rural Pennsylvania, where she bought a farm.

Taught by a master

He later said his mother took out her wrath over the divorce on him. He found a surrogate family in the nearby household of Hammerstein and his wife, Dorothy.

Hammerstein, who along with partner Richard Rodgers created the classic musicals Oklahoma and The Sound of Music, taught the teenage Sondheim how to write musical theatre.

After Sondheim became famous, he mentored others on Broadway.

When Miranda began work on a rap musical about American founding father Alexander Hamilton, Sondheim encouraged and critiqued him.

The play became a smash hit on Broadway and has been playing to packed houses in Australia since March this year.

Sondheim, who was gay, did not live with a romantic partner until the age of 61, according to a 2000 profile in The New York Times Magazine, in which he said his romantic relationships were rarely intense or long-lasting.

Broadway mourns the passing of legendary Stephen Sondheim, dead at 91