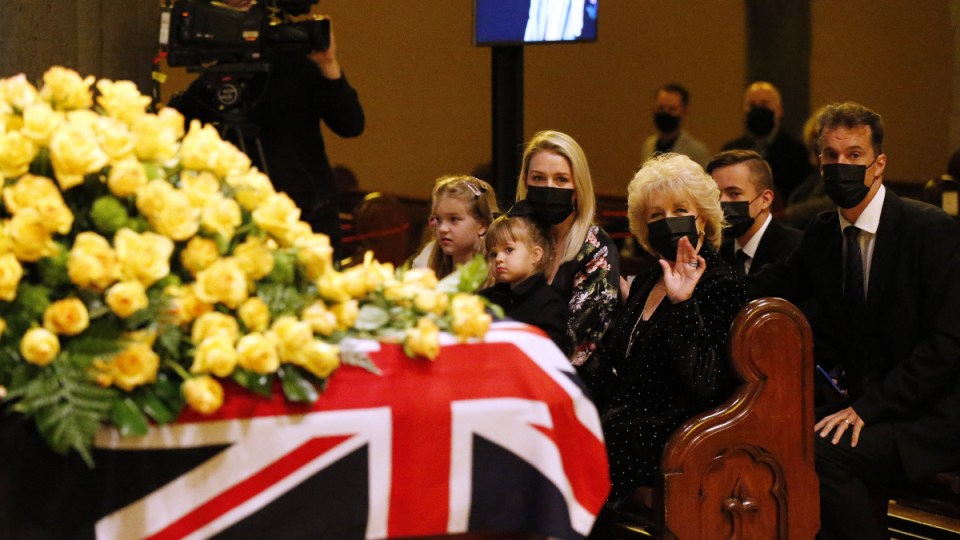 Pattie Newton with daughter Lauren and her children at the funeral on Friday. Photo: Getty

Hundreds of family and friends have farewelled entertainment legend Bert Newton at a state funeral in Melbourne.

The man affectionately known as “Moonface” died aged 83 on October 30 at a private Melbourne clinic after his leg was amputated in May due to a life-threatening infection.

Newton’s widow, Patti, was among the first to arrive for Friday’s state funeral at at St Patrick’s Cathedral in East Melbourne. She was accompanied by her daughter Lauren, with son-in-law Matt Welsh and their children.

They were among 500 guests allowed to attend, due to COVID-safe requirements. The public was excluded, but the service was streamed online and broadcast live on the ABC and commercial networks.

Molly Meldrum and Daryl Somers were among dozens of TV and radio personalities at the service, as well as Glenn Robbins, Andy Lee, Peter Hitchener, Sam Newman and Denis Walter.

TV host Eddie McGuire was among those to give official tributes.

“Since his passing, there has been recognition of his incomparable performances. What has been underlined from story after story is his amazing generosity of spirit,” he said.

“On camera, onstage, behind the microphone, Bert Newton gave of himself to make the show work and the segment pop, make his colleagues look as good as he could, to give everything for his beloved audience.”

Mr Andrews said Newton had been a favourite of his grandfather’s.

“To Australia, Bert wasn’t just a man on a screen or an actor on a stage. He was someone we all felt we knew. Like a fireplace on a cold night, families gathered around their TV sets, drawn in by his warmth and his inviting ease,” he said.

“He was more than talent, he was trust. His story is the story of Australian television and while he was first beamed into our homes in black-and-white, Bert was colour TV long before technology arrived.”

Entertainer Pete Smith, a long-time friend of Newton’s, choked up reading family tributes. One was from son Matthew, who remained in the US and did not attend.

“Over the last 10 years while I’ve lived abroad, dad and I would play out conversational songs over Zoom and FaceTime, tools that allowed me to connect and in a way reconnect with my whole family, but especially with dad,” Matthew Newton wrote to Smith.

“Everyone knows he was a great entertainer but what a lot of people don’t know about dad was that he wouldn’t just be around for the laughs, those close to him experienced how he would show up in the tough times as well. No one more than me.”

On behalf of Lauren Newton, an emotional Smith said:

“Saying goodbye has been heartbreaking for us all, especially mum. They love one another so much, and I know how he waited until she left the room to take his last breath because while she was with him, he couldn’t have gone. My beautiful dad will be with us for ever in our hearts and memories, but life will never be the same without him. I love you, dad.”

There were also musical tributes to the consummate showman – Anthony Callea and John Foreman sang a prayer – while a compilation of his greatest TV moments drew chuckles from the crowd.

Alongside Graham Kennedy and Don Lane, he was part of a trio known as the kings of Australian television.

A stalwart of Australian theatre, Newton performed in Beauty and the Beast, The Sound of Music, Annie, The Rocky Horror Show, Grease and Wicked.

Several Melbourne theatres dimmed their lights for one minute at 7.30pm on Thursday to honour Newton’s contribution to the industry.

“Bert was a great professional and an esteemed colleague and friend,” Her Majesty’s Theatre owner Mike Walsh said.

Newton is survived by Patti, his wife of more than 46 years, children Lauren and Matthew, and grandchildren.

Who was the King? How Elvis Presley devoted his life to a consuming passion
Quantum Leap star Dean Stockwell, 85, dies
Today's Stories

‘More than talent, he was trust’: Bert Newton farewelled at state funeral