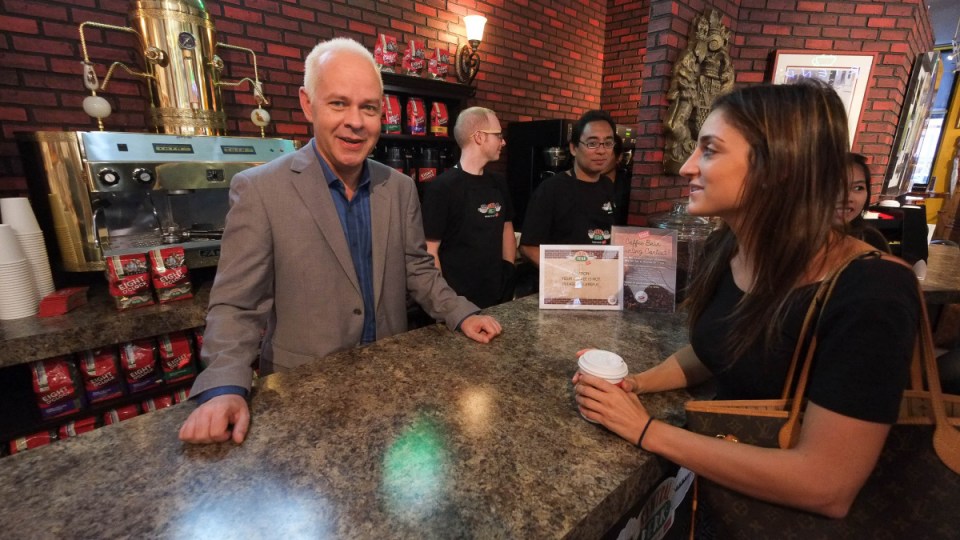 James Michael Tyler back behind the Central Perk counter at a Manhattan pop-up in 2014. Photo: Getty

Tyler, who was 59, played Central Perk barista Gunther on the hit show for 10 years.

He revealed his diagnosis in mid-June, about three years after his treatment began in 2018.

Tyler died on Sunday (US time) at home in Los Angeles, his manager Toni Benson said.

“The world knew him as Gunther (the seventh ‘friend’), from the hit series Friends, but Michael’s loved ones knew him as an actor, musician, cancer-awareness advocate, and loving husband,” Benson wrote in a tribute.

Tyler, who also appeared briefly in 1990s series such as Just Shoot Me! and Sabrina the Teenage Witch, was cast as a background character in the second series of Friends in 1994.

During the show’s 10-year-run, he became the most frequently recurring guest star on the series playing Gunther, the Central Perk barista with an unrequited affection for Rachel (Jennifer Aniston).

Aniston was one of the first to pay tribute to her former co-star, saying Tyler would be “so missed”.

“Friends would not have been the same without you,” she a clip of their final scene together, in Gunther admits his crush on Rachel.

“Thank you for the laughter you brought to the show and to all of our lives.”

Tyler didn’t have a line of dialogue until he had made 33 appearances on Friends. During its 236 episodes, he appeared in 150 of them.

He revealed his cancer diagnosis in an emotional interview with the ancher of the US Today show, Craig Melvin. He told Melvin he was having chemotherapy and urged others to be proactive about getting screened for the disease.

“I’m sorry to say that I’m not appearing with you today to announce that there’s going to be a Friends movie,” he said.

“I’m here to let you know that in September of 2018, I was diagnosed with advanced prostate cancer, which had spread to my bones.”

By the time he spoke to the show, Tyler could no longer walk.

He did make a brief cameo via video in the much-anticipated Friends reunion in May, alongside the six main cast members.

“I didn’t want it to be like, ‘Oh, and by the way, Gunther has cancer’, you know what I mean?” he said of his participation in the reunion.

Warner Bros Television, which produced the hit series, mourned the death of Tyler, “a beloved actor and integral part of our Friends family”.

Courteney Cox, who played Monica Geller, shared a photo of Tyler in the Central Perk.

“The size of gratitude you brought into the room and showed every day on set is the size of the gratitude I hold for having known you. Rest In peace James,” she wrote.

“We had a lot of laughs buddy. You will be missed. RIP my friend,” he wrote on Instagram.

Lisa Kudrow, who played Phoebe Buffay, thanked Tyler for “being there” for his co-stars.

“James Michael Tyler, we will miss you. Thank you for being there for us all,” she wrote.

Once Friends concluded in 2004, Tyler appeared on Scrubs, Modern Music and he played himself on an episode of LeBlanc’s Episodes in 2012.

After being diagnosed with cancer, Tyler starred in two short films while undergoing treatment and gave a spoken-word performance of the Stephan Kalinich poem If You Knew to help raise awareness for the Prostate Cancer Foundation.

Tyler is survived by his wife, Jennifer Carno.