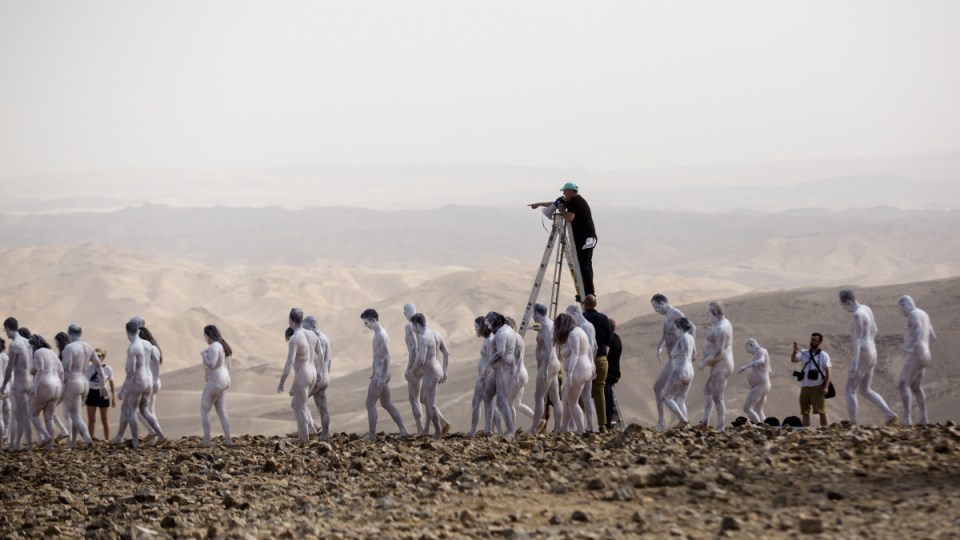 People have taken part in a nude photo shoot to draw attention to a bid to preserve the Dead Sea. Photo: Getty

Spencer Tunick, a US photographer famous for his images of groups of naked people at iconic places, has organised an installation to raise awareness about the deterioration of the Dead Sea.

About 200 people between the ages of 19 to 70 agreed to disrobe and be painted white to fulfil Tunick’s vision of a human pipeline in the desert surrounding the Israeli city of Arad.

Tunick said his purpose was to bring attention to how the Dead Sea, located at the lowest point on Earth, is gradually shrinking.

“We need to find a way to sustain the sea level or to bring fresh water into the sea. But at the same time to keep all countries surrounded with water. Water is life,” he said.

This is Tunick’s third art installation on the shores of the Dead Sea.

“I included fewer people than 10 years ago. It’s more of conceptual work. I turned the people into pillars of salt in connection to the biblical story of Lot,” the photographer said.

Tunick said he wanted to show how sinkholes caused by the receding sea level are ravaging the area, making many beaches completely inaccessible.

The 54-year-old photographer thanked the “true art warriors and adventurers” for their participation in this latest installation dedicated to the Dead Sea, which he described as “the eighth wonder of the world”.

Tunick is also seeking to raise funds for the Dead Sea Museum, a project of his friend Ari Leon Fruchter, who has fought for years to preserve the salt lake.

“We want to raise awareness of the Dead Sea situation. This is an important resource for Arad and the desert. We need to keep it safe,” Arad Mayor Nissan Ben-Hammo told EFE, adding that he hoped the museum would draw tourists interested in the area’s cultural and environmental heritage.