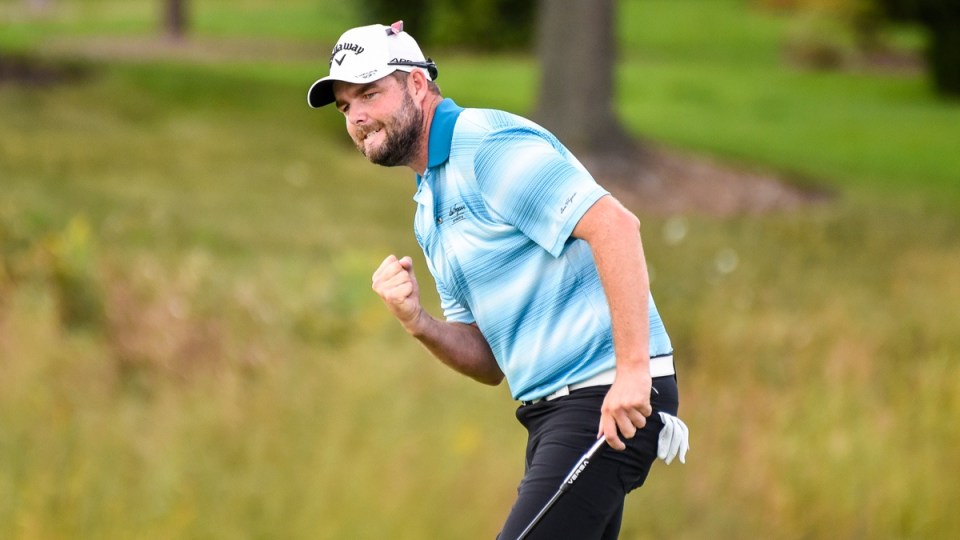 Marc Leishman is brimming with confidence as the Masters enters its final round. Photo: Getty

Marc Leishman says the pressure is squarely on leader Hideki Matsuyama as the Australian readies himself for a Sunday green jacket chase at the Masters.

Matsuyama produced an incredible back nine blitz, after a short weather delay in the third round, gaining six shots in seven holes on his way to a brilliant seven-under 65 to get to 11 under.

Leishman, who carded a 70 to be part of a four-way tie for second at seven under, says the four-shot buffer Matsuyama holds could be gone in the blink of an eye when the blowtorch is applied in the final round.

Matsuyama has the weight of an entire nation on his shoulders as he attempts to become Japan’s first-ever men’s golf major champion.

Leishman said he is excited to be one of the hunters.

“The pressure is on Hideki tomorrow,” Leishman told AAP. “He has a lot of people chasing him who want to put that jacket on as much as he does.

“And I have the chance to apply more pressure to him if I can get off to a good start.

“If I can produce some roars around here and give him something to think about – four shots isn’t much around this place.

“I love chasing. I said it to my son, Harvey, the other day when he fell behind in a junior tournament.

“Us Leishman’s are up for the fight. We love coming from behind.”

Another factor Leishman is working in his favour: Matsuyama has had to sleep on a large lead, which brings brings added pressure and nightmare visions of choking under pressure.

History provides a chilling example of what that pressure can do. In 1996 Greg Norman took a six-shot buffer into the final round before coming down with the yips and being beaten by Nick Faldo.

Leishman said he would love to celebrate that anniversary with some Aussie redemption.

“I saw Greg this morning and I don’t know if it would be much consolation for him, but for me, and hopefully Australia, it would feel pretty good to get the job done 25 years on,” Leishman said.

“Be great to share a beer with him after. But there is a lot of golf left to play. I can’t get ahead of myself.”

Leishman indeed does have a history of chasing down victories.
Three of his five PGA Tour titles came when facing large final round deficits.

While he hasn’t won a major, the 37-year-old has been in the pressure cooker arena before, most famously losing a playoff in the 2015 British Open.

Leishman also played the final round with Adam Scott at Augusta in 2013 – the year Scott became the first, and so far only, Australian to win the Masters.

“I’ve learned you don’t have to be perfect. You can make mistakes, but they just can’t be big mistakes,” Leishman said.

“A lot is going to have to go right, but I’ve been here before, and I feel comfortable in this position.

“I enjoy this. This is what we play golf for, so I’m excited for tomorrow.”

The remaining Australians are likely playing for pride on Sunday, with 2020 runner-up Cameron Smith (73) one under, Matt Jones (74) one over while Scott had a day to forget with a seven-over 79 leaving him at 10 over.