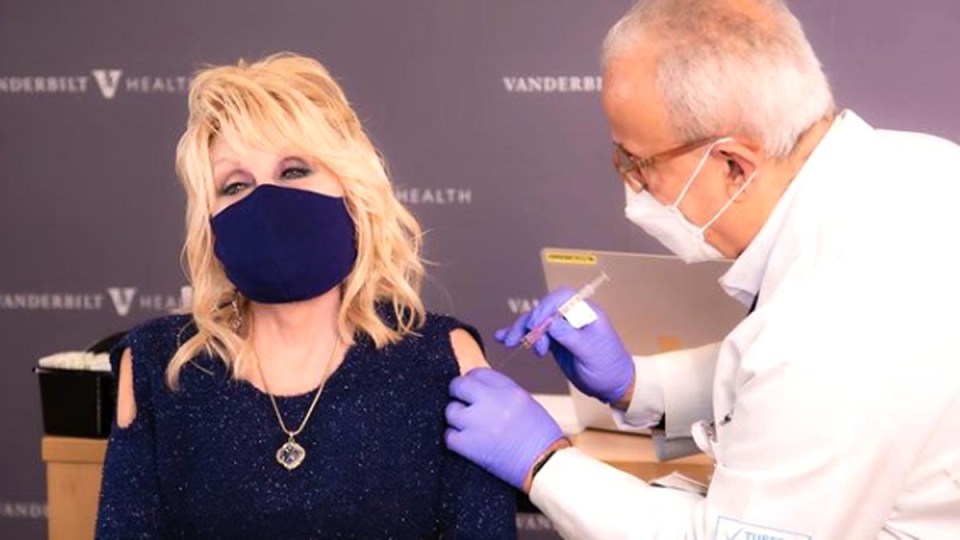 Dolly Parton has celebrated “getting a dose of her own medicine” with a riff on one of her most famous songs in the moments after she got her first COVID jab.

Her impromptu song, shown in a video posted to her Instagram page on Tuesday (US time), came after she received her first dose of the Moderna vaccine.

Moderna’s COVID jab is being rolled out in a broad vaccination campaign across the US. It was developed partly thanks to a $US1 million ($A1.3 million) donation from Parton in 2020.

“Dolly gets a dose of her own medicine,” her caption read.

In the video, she encouraged viewers to get vaccinated because “the sooner we get to feelin’ better, the sooner we are gonna get back to being normal”.

Parton got her shot from Dr Naji Abumrad, a Vanderbilt University doctor she met after a car wreck in 2013. Their seven-year friendship led to Parton donating to vaccination research.

“I just wanna say to all of you cowards out there: Don’t be such a chicken squat, get out there and get your shot.”

Parton’s vaccination came as US President Joe Biden said the country expected to take delivery of enough coronavirus vaccines for all adult Americans by the end of May, two months earlier than anticipated.

With the bolstered supply, Mr Biden also said he would use the powers of the federal government to direct all states to prioritise vaccinating teachers.

He said Washington would provide the doses directly and challenged states to administer at least one dose of the vaccine to all teachers by the end of March as part of his administration’s efforts to re-open more schools.

“We’re now on track to have enough vaccine supply for every adult in America by the end of May,” Biden said.

Earlier, Parton told USA Today she “got in line” for a vaccine in December – and wouldn’t “jump the line”, despite her donation to its development.

“I think I’m getting more credit than I deserve,” Parton said.

“But I was just so happy to be a small part, and to plant a seed that would grow into something bigger.”