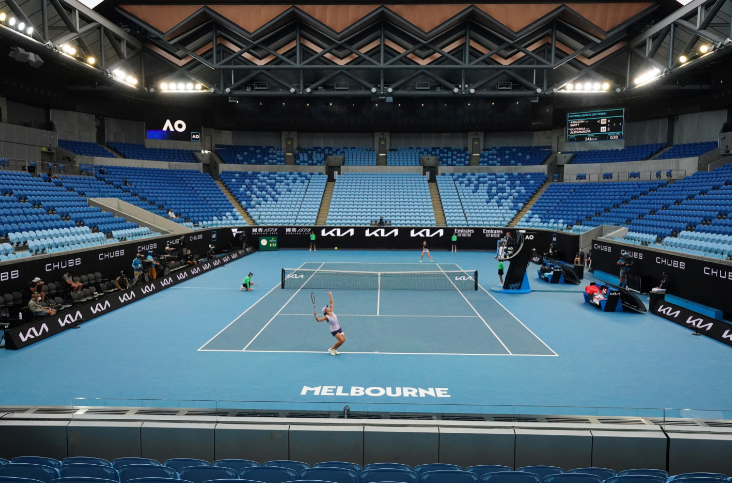 As Nick Kyrgios and Thanasi Kokkinakis walked on to Melbourne Park’s 3000-seat Show Court 3 late on Saturday afternoon for their delayed opening round doubles match against Lloyd Harris and Julian Knowle, they raised their racquets in acknowledgement of the welcoming crowd.

Except that, oh, that’s right, there wasn’t one.

So silly-ridiculous was the mock gesture to the roughly 50 people scattered around the stadium that Kokkinakis got the giggles as he dumped his racquet bag by his chair.

Welcome to Super Saturday at the Australian Open. As it has never been witnessed before.

Normally, the box-office Aussie duo would be perfect early evening viewing fare for patrons who gather in record numbers on a traditionally very social day six – around 93,000 of them in 2020. After all, Kokkinakis is a popular, natural showman and Kyrgios has just very occasionally been known to enjoy an audience too.

“We were very excited to play in front of fans on Show Court 3 on a Saturday when everyone is getting pissed, so that would have been awesome to go out there and just give them something to kind of go out with a bang,’’ said Kyrgios, whose live Friday night audience was considerably larger and, obviously, louder.

But that was pre-lockdown, when patrons were still allowed on-site.

It was also pre-11.30pm when, had Kyrgios and Dominic Thiem not completed their pulsating duel on John Cain Arena, the order for fans to evacuate ahead of the 11.59 curfew would surely have sparked a riot. Fortunately, spectators taking in the Djokovic-Fritz contest on Rod Laver Arena took the edict to go home with no worse than resentful resignation.

How different, almost eerie, it was on Saturday – the first of a minimum of five days without crowds. Starting with the basics: you could ditch the tram and count on a parking spot nearby after whizzing through the empty-again Melbourne streets. And just as players were deemed essential workers, media types spreading the AO message to the world were also permitted to go about their normal duties in a uniquely low-density media room missing most of its regular international visitors.

On the way in, there was a chap lying alone in his socially-distanced circle on the grass out the front of Rod Laver Arena, but not a soul on the concourse, nor a hot dog or a cold chip to be bought. Through Garden Square and past three umpires, a few magpies and a camera crew, the only other human faces were those on the bronze busts of the former greats.

Which, even given the limited crowds of less than 23,000 in the opening five days, was new to the AO, but not to the players who contested the (zero-spectators) US Open and (1000-daily-maximum) French Open. World No.1 Barty was not among them, having decided the health risk was not worth a trip to New York, nor a title defence at Roland Garros.

“Something I’ve never experienced before, ever in my life, so it’s very strange,’’ said Barty, who lost the first two games to Russian No.29 seed Ekaterina Alexandrova before winning 12 of the last 16 to reach the fourth round, which will see her play American world No.60 Shelby Rogers.

Barty admitted she quite liked the sound of the ball in an empty stadium, as it reminded her of practice sessions. The other noise she could hear: the proverbial pin drop. Not necessarily a bad thing.

“I can listen to the spin the opponent is hitting on the ball, the pace it’s coming. It’s just another way for me to be able to absorb the information quickly, to then adjust and change what I need to in order to try and then put the ball in the position that I want to.’’

American Mackie McDonald contrasted the “massive buzz” he usually finds in Melbourne with what he heard during his singles third round against South African Harris.

Without crowd at tonight's @AustralianOpen the wife has insisted we clap & cheer @ashbarty's points to create our own atmosphere.
Just got to me feet, jumping & cheering Ash breaking back & was told I'm now overdoing it.
I don't think so. 😟

“We could hear this beep for the first set and we had no idea what it was, and they got a guy to come over and check it out. It was actually the guys scanning badges at the front gates for the people who were coming in who were working the tournament.

“But it took like seven games to figure that out. So it was so quiet we could hear that beep all through the stadium! And I could also hear how loud the ‘out’ calls were with no one there.

“But other than that, I mean, it is what it is. We have to be safe and it’s all necessary, so just happy we could play today.’’

For women’s fifth seed Elina Svitolina, the contrast was with a well-populated 7pm night match from her second round. Completely different. “It was for sure a bit disturbing, I would say in some ways sad. But it is what it is. I had to accept. I had to have a good mindset, not thinking too much about that.’’

Life without tennis crowds will not be something Kyrgios embraces, however. He recalled being a break down in his loss to Borna Coric in last week’s Murray River Open, and how hard it was to pick himself up in front of a tiny audience.

“For me personally it was tough to have a chat with myself and look around and see no one watching and just trying to produce big tennis against a pretty good player. It wasn’t easy,’’ said Kyrgios, who said it would have been “tough” for him had he reached the Open’s fourth round.

“I think sports is entertainment at the end of the day, and I want to be able to play in front of full crowds around the world. That’s what I’m used to, and … I was talking to Thanasi when I was out on the doubles court, I was like ‘I don’t know if I’m able to do a full schedule with doing this stuff’.

“Going out on court and playing with no crowd, I don’t know if that’s the way I want to do it, me personally, and that’s fine. That’s not a shot on anybody who does want to go play and go get points and make money. That’s fine, but for me I’m not sure that’s the option I’m going to go down.’’

A choice? The Australian Open doesn’t have one. Just a hope that paying customers will be allowed back for the last four days.

Perhaps (but probably not) the Australian doubles wildcards will still be going by then, Kyrgios having fallen to his knees after Saturday’s win, theatrically shaking his fists and gazing to the heavens as if acknowledging the applause of a full house.

This one was near-empty. Best to get used to it. There are a few more days of what we never wish to feel like it’s normal to come.