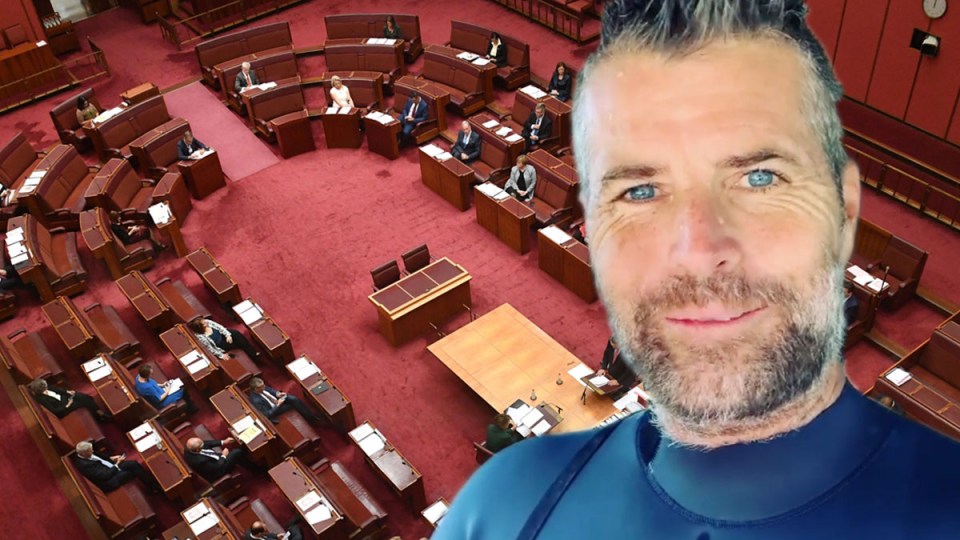 Pete Evans has his eye on a seat in Parliament. Photos: Getty/Instagram

It’s on … Pete Evans is stepping into politics.

The controversial celebrity chef and conspiracy theorist has joined forces with a bankrupt politician to run for federal parliament.

On Friday, Evans was “proudly announced” as the first Senate candidate for the Great Australian Party, a fringe party set up by former One Nation politician Rod Culleton.

“Pete Evans has maintained his principles and inspired others in the face of uncommon adversity,” Mr Culleton said in a statement.

Mr Culleton outlined the “essential attributes” that he believed made the ex-chef an ideal candidate to represent the party, including “courage” and provoking debate.

“Pete Evans has consistently demonstrated courage in exposing matters of public information and interest, provoking much-needed debate, despite personal cost to himself,” he said.

“Pete possesses the essential attributes required to challenge the status quo and restore the rule of law as defined in our constitution.”

The courage to provoke debate may refer to Evans’ strong anti-vaxxer views and his penchant for peddling misinformation about the coronavirus on social media.

Prime Minister Scott Morrison was asked whether Evans making a run for the Senate would undermine confidence in Australia’s vaccine rollout.

“No,” he said in Melbourne on Friday.

Mr Culleton – who was briefly a Senator – was kicked out of parliament in 2016 after the Federal Court found he was bankrupt.

The following year, the High Court ruled him ineligible to run as a senator due to a larceny charge in NSW.

The Great Australian Party has been registered by former One Nation president Ian John Nelson.

On its official Facebook page, a note states “the Commonwealth constitution dictates that you are the ‘supreme, absolute, uncontrollable authority’ in this country, and that is what GAP is all about”.

The micro party wants to overhaul the judicial system and redesign the separation of powers, making parliament the ultimate court of appeal.

It also wants to reform the tax system, crack down on foreign investment and promote religious education “based on facts”.

The party ran five candidates at the 2019 federal election, securing about 5300 votes.

Evans rose to fame as a TV chef, but was dumped by a string of sponsors and from a reality television show after sharing a neo-Nazi image on social media.

The former chef has become known for sharing his anti-vaxxer views and discredited coronavirus cures.

He was fined by the Therapeutic Goods Administration early in 2020 for selling an ultraviolet lamp he claimed could cure coronavirus.

Evans had more than a million followers on Facebook, before he was booted from the platform for repeatedly posting misinformation about the pandemic.

The aspiring politician maintains a strong following on Instagram and uses his podcast, Evolve With Pete Evans, to interview guests on some of his pet topics – including vaccinations and the impact of glyphosate.