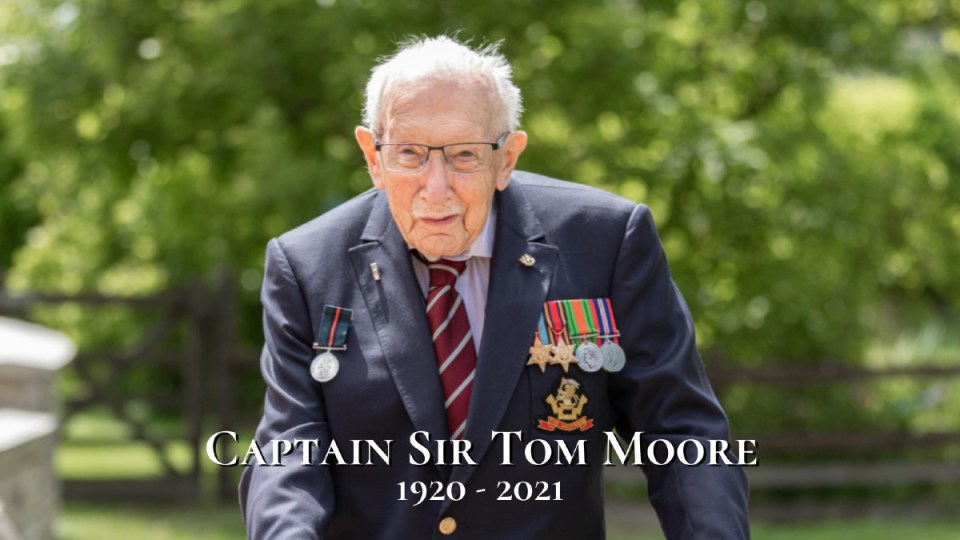 Britain is grieving the loss of a national treasure after the death of Captain Sir Thomas Moore, 100, who had contracted coronavirus.

Buckingham Palace confirmed the Queen, who knighted Sir Tom last year, would send a private message of condolence to the veteran’s loved ones, while Prime Minister Boris Johnson wrote a touching tribute to Sir Tom’s life and legacy.

The World War II veteran was hailed a hero last year for his efforts raising money for healthcare workers during the pandemic.

Mr Johnson said Sir Tom was “a hero in the truest sense of the word”.

“In the dark days of the Second World War he fought for freedom and in the face of this country’s deepest post-war crisis he united us all,” Mr Johnson said.

“He cheered us all up and he embodied the triumph of the human spirit.”

Sir Tom began his fundraising journey with a humble goal to raise £1000 for the National Health Service by walking 100 laps of his garden.

As he won the hearts of people around the world through videos posted on the internet, the grandfather eventually raised more than £32 million ($A58 million).

On Wednesday morning his two daughters, Hannah Ingram-Moore and Lucy Teixeira, released a statement informing the public of the death of their beloved father.

“It is with great sadness that we announce the death of our dear father, Captain Sir Tom Moore,” their statement read.

“The last year of our father’s life was nothing short of remarkable. He was rejuvenated and experienced things he’d only ever dreamed of.

“Whilst he’d been in so many hearts for just a short time, he was an incredible father and grandfather, and he will stay alive in our hearts forever.”

Captain Sir Tom Moore made an impression around the world and received more than 200,000 birthday cards to mark his 100th birthday.

His inspirational message and positive attitude made him a symbol of hope during the historic events of the global pandemic.

Here are some of the moments that made the last year of his life ‘remarkable’:

Spain and Portugal see major leaps in monkeypox infections
Peter Dutton touted as next Liberal leader as he claimed victory in Dickson
Volodymyr Zelensky: How war will end as Ukraine ‘breaks backbone’ of Russian army
Jim Chalmers decries Coalition waste as Labor hits the hustings amid downpours in Queensland
Anthony Albanese, Scott Morrison cast their votes in Sydney
Australian aces at French Open out to show there’s life after Ash Barty
Garry Linnell: If anti-vaxxers are the village idiots, what does that make the rest of Australia?
Today's Stories