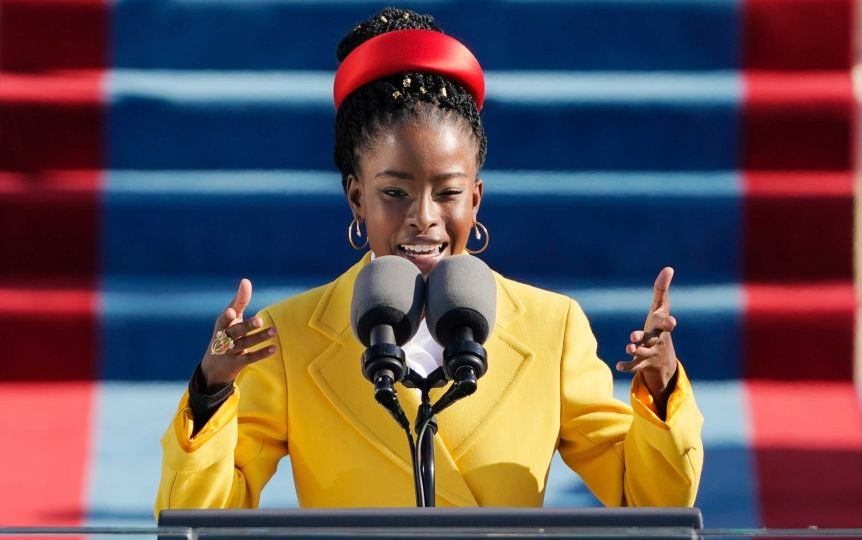 Amanda Gorman reads her poem at the US Capitol on January 20. She will follow up with a performance at the Super Bowl on February 8. Photo: ABC

Amanda Gorman, the young American poet who rocketed to global attention with her reading at Joe Biden’s presidential inauguration, will perform at February’s Super Bowl.

Ms Gorman, will perform an original poem before the game to honour three heroes the NFL has chosen as honorary captains for their service throughout the devastating coronavirus pandemic.

Last week, at 22, she became the US’s youngest inaugural poet laureate when she recited her poem The Hill We Climb at the inauguration ceremony for Mr Biden.

Ms Gorman drew widespread praise for her performance, including from stars such as Oprah Winfrey, Stacey Abrams and Lin-Manuel Miranda. Former president Barack Obama and former presidential candidate Hillary Clinton also weighed in after her powerful work, which addressed America’s fraught racial history and social justice progress while hoping for a better tomorrow.

On February 8, she will again be watched by millions when she becomes the first poet to perform at the showdown between the Kansas City Chiefs and Tampa Bay Buccaneers in Tampa, Florida.

Ms Gorman will recite another original work for the NFL.

It will honour educator Trimaine Davis, nurse Suzie Dorner, and US Marine veteran James Martin. NFL commissioner Roger Goodell, who announced Gorman’s role on Wednesday (US time), said the trio embodied the league’s message of “it takes all of us”.

“We are honoured to recognise these three individuals who represent the best in all of us,” Mr Goodell said.

“During this incredibly challenging time in our lives, Trimaine, Suzie, and James have exemplified the essence of leadership, each in their own way. We are grateful for their commitment and proud to share their stories and recognise them during this special moment on Super Bowl Sunday.”

Ms Gorman, who is from Los Angeles, started writing poems as a child, but found performing frightening because of her speech impediment. She reportedly overcame her trepidation by listening to Mr Obama and the Reverend Martin Luther King Jr.

Amid the widespread acclaim for her performance at the January 20 presidential inauguration, she revealed she had worn a ring with a caged bird – a gift from Winfrey – as she recited her poem, “to symbolise Maya Angelou, a previous inaugural poet”.

“Here’s to the women who have climbed my hills before,” she said.

Poetry in motion – Amanda Gorman to perform at Super Bowl