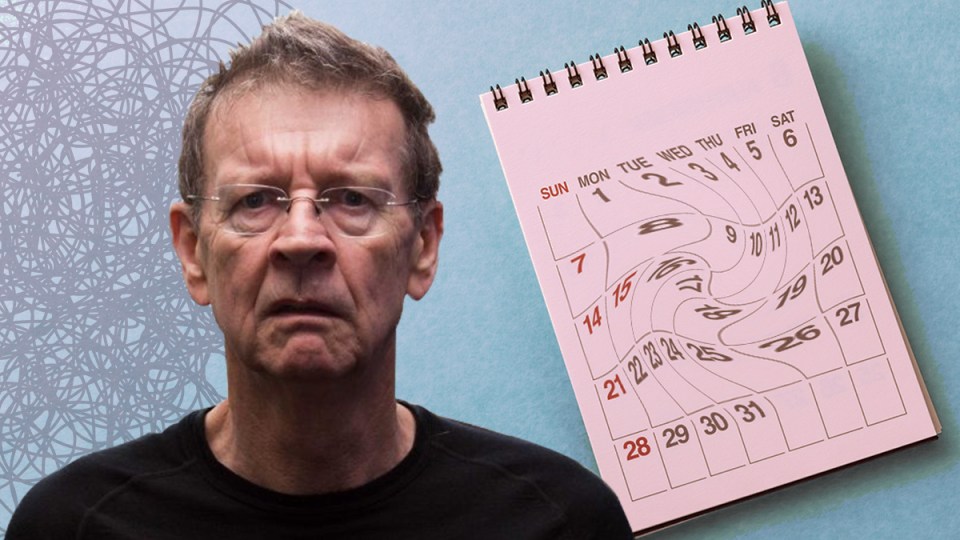 Red Symons pauses to reflect on the slipping of time in an age where days have no end or beginning. Photo: TND
opinion

Here’s a new problem to torment you in this time of upheaval.

What day of the week is it?

It’s interesting that, in a time when the days simply flow from one to the next without the markers of work and weekend, one simply loses track.

You are losing your memory.

While you may be of an age where you mutely berate yourself and your lost capacities, where you fear early onset dementia, it’s also useful to remember that when you were a teenager you also forgot all manner of things.

Don’t worry, you were always forgetful.

Sherlock Holmes espoused the notion that the brain is like an empty attic, limited in size and, ideally, storing only useful information, like toxins and muddy shoes.

It is of the highest importance, therefore, not to have acts elbowing out the useful ones.

Memory, however, is not simply unrelated dots in the void.

Like planets in the solar system, it is a web of ideas with markers and relationships that help you retrieve the dot you want.

You can probably name the planets.

My mother had an interesting exposition of memory and the markers of interrelation.

She had a stroke and found herself in the hospital, somewhat recovered and determined to persist, and was waiting to receive a pacemaker.

With concern about intrusive surgical entry into her body, she enquired, “Will they give me a …?”

She paused, staring into the empty distance, as she hunted her memory for the appropriate word.

I didn’t say no, I just assisted her towards the correct label.

“Yes, there will be an anaesthetic.”

It was as though, in the blur of her diminished memory, she had gone into the kitchen knowing that the word was somewhere in the cupboard above the sink, and picked a word that was in the correct general area.

A brief aside: interestingly, doctors will search the web on their phones for a solution to diagnose and treat a patient. Don’t worry, they know the right cupboard to look in.

The largest number of random digits that can be remembered by those competing for a science prize is more than 150.

Notice, I can’t remember the exact number and it probably varies each year anyway.

Break the digits into trios and mark them with an association.

The first three are the date of the World Trade Centre attack.

The next is what you call in an emergency.

The third is the days of the year.

By the way, my instruction for remembering jokes is, remember the punchline and you will find the pathway there.

As the bear said to the hunter, “You’re not really here for the hunting, are you.”

If you see me in the street, I can explain.

The other memory technique for lists is to put each item in your imagined house.

Your shopping list is an aspirin, the complete works of Shakespeare, a tennis ball and a candelabra.

I don’t care if you throw the aspirin in the bin as you approach the front door and stack the Shakespeare in the toilet for some thoughtful timeout, although I do think the candelabra should go in the good room.

The point is that you alone make these choices and subsequently enter each imaginary room to discover the association and the memory and the list.

As a student doing exams, I learnt that it has a half-life like uranium.

Cramming for exams means that what you stayed up late learning yesterday will have full radioactive recall but what you learnt a year ago will be fuzzy, distant and inert.

Don’t worry about what day of the week it is.

It will come around again.

Like sand through the hourglass, the days and days of our lives