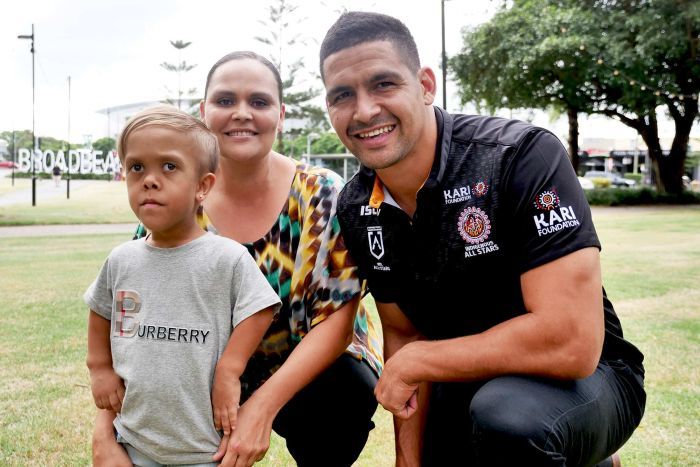 Quaden met with the Indigenous All Stars team including including Rabbitohs player Cody Walker on the Gold Coast. Photo: Solua Middleton

As Quaden Bayles prepares to lead out “his uncles” in the NRL’s Indigenous All Stars game, a GoFundMe page set up to raise cash to send the bullied Brisbane nine-year-old to Disneyland in California has soared past $430,000.

Quaden is a Murri boy who lives with Achondroplasia, a common form of dwarfism, and his story exploded after his mother posted a video of him crying after a day of bullying at school, which has been viewed more than 8 million times, in which he says he is feeling suicidal.

The video prompted an outpouring of support, including an offer to lead out the Indigenous side for their clash with the Maori All Stars on the Gold Coast on Saturday.

Quaden’s mother, Yarraka, described the bullying he received as an Aboriginal boy with a disability as a “double-edged sword”.

“It’s every parent’s worst nightmare; losing their babies and that’s my reality every day,” she said.

“I have to prepare for the worst. The suicide attempts are very real, and people don’t understand that.

At a press conference, she said they were overwhelmed by the support they had received from around the world, and Quaden was “very excited” to lead out the team at Robina Stadium.

“They’re all his uncles; [he’s] related to most of them so they’ve always been there, but … we could never have dreamt in our wildest dreams that it would’ve gone worldwide.”

Yarraka said Quaden dreamt of being a footy star, but “that’s not going to be reality and he knows that”.

“These uncles of his and our brothers and cousins are living the dream that he only dreams of,” she said.

“This is the closest thing for him to be able to get out on that field for him to play football. And if all he can do is run the boys out then that’s enough for us.”

Both Yarraka and Quaden are Rabbitohs fans, and South Sydney playmaker Cody Walker captained the team last year and said the players recognised their privileged position to lift Quaden’s spirits.

“One of the vehicles in Aboriginal communities is rugby league. This game’s very important within those communities,” Walker said.

“So what better way than to get Quaden down here on the GC, be a part of our team, lead us out like the young warrior he is and show him that we love him, that the broader community love him and he’s doing a wonderful job in standing up [to] this type of behaviour.”

A fundraiser page was set up by US comedian Brad Williams, who also has Achondroplasia, and he told ABC Radio Sydney the video left him with a “broken heart”.

“I myself have dwarfism. I myself was bullied as a child and with social media sometimes continue to be bullied. It really broke my heart when I saw Quade and I want to do something about it,” he said.

Williams, who is currently touring the US and is considering touring Australia in December, said the bullying towards people with dwarfism was similar to other forms of discrimination.

“A lot of it comes from the same place where a lot of racism comes from, where it’s just a matter of ignorance, where people aren’t familiar with people who are different,” he said.

“So when they see someone who has dwarfism or something that they’re not familiar with, and they’re unsure of, the first instinct, very sadly, is to attack.”

Williams isn’t the only person to offer support to Quaden.

Williams originally set a target of $US10,000, and says all the extra money raised will go towards anti-bullying and anti-abuse organisations.

Williams used to work at Disneyland and has promised to personally show Quaden and his mother Yarraka around the Anaheim theme park.

“It is my full intention to show him around the park … there will be photos, there will be video. You will see this kid meet Mickey [Mouse] and have a smile on his face as wide as the continent,” he said.