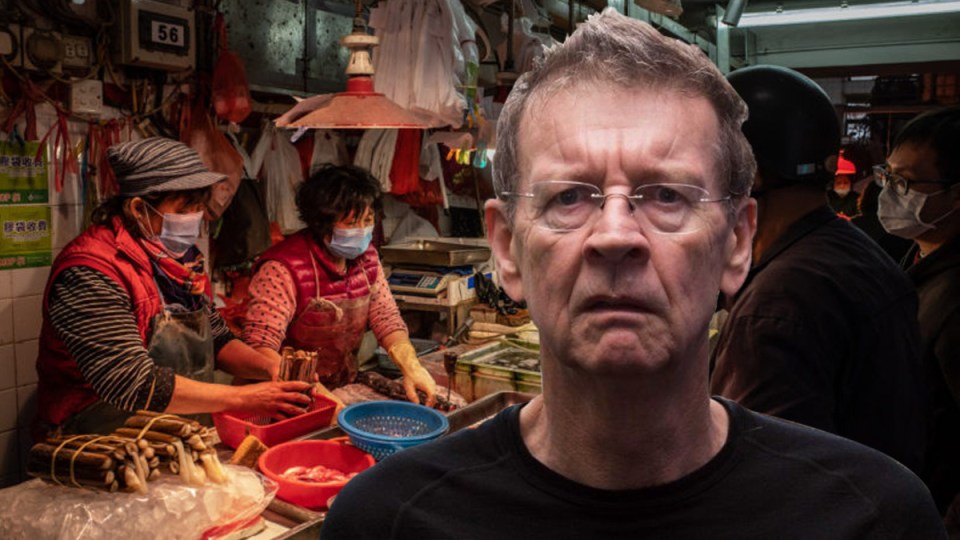 All roads lead to the novel coronavirus.

In the 1970s, I intersected briefly with the painter Brett Whiteley.

It was at the time that Bob Dylan had, for no discernible reason, become Christian and I asked Whiteley what was all that about.

He said that being born-again was in the zeitgeist, the tide of the times.

Whiteley said his paintings that summer were filled with bushfires. It dominated the news.

I can’t visit a zoo without wondering what it would be like to eat the exhibits.

My grandmother ate a fox and I prodded her for a critique. How did it taste?

“Strong”, she said and little more.

She was unprepared for the endless florid adjectives that wine critics employ to describe variations of exactly the same thing.

I was left with the impression that carnivores are not particularly tasty. That removed a reasonable proportion of the zoo animals from my imaginary banquet.

My father retrieved starling eggs from a nest in the eaves of our house. He fried it in a pan and it tasted like pretty much any other egg. It was just “smaller”.

Michelangelo’s statue of David has a sling over his shoulder that I expect was mostly used to kill birds for food. Goliath was just unlucky. David had done the training.

Parrots, if you’re wondering, taste much like any other bird – like a duck or a grouse or a pheasant or a quail.

As a butcher once observed, all the animals – sheep, cows, pigs and goats – taste largely the same.

At a market in Peru, I was perturbed to see that the stall-holders had brought what appeared to be rats with fat heads for their lunch.

They turned out to be guinea pigs and I came around to the idea. They just eat grass, don’t they?

Which leads me back to the zoo. There you will find the capybara, a variation on the guinea pig, a mammal, native to South America, the size of a small pig. I suspect they would be tasty and could feed a family.

One of my sons, when offered a chicken leg, famously observed, “That’s ridiculous. Food doesn’t walk”. We live in a world distant from the true origins of food.

Several years ago I went into a restaurant in Guangzhou, China.

The ground floor was a zoo, entirely populated with animals, birds, fish, reptiles and insects.

The only advice I can give is to ask for it to be well done. After that, you’re on your own.

I do not believe that rhino horn as a food and medicine will enhance manhood. This is metaphor taken too literally and besides there’s clearly not enough to go around.

As for pangolin, I am unaware of any efficacious properties and it would seem to run the risk of giving 60 per cent of the world population a new and uncontrollable flu.

I was recently at a friend’s place and among the objects artfully scattered on the table was a small wooden carving of a pangolin, a scaly anteater found in Africa and Asia.

I contemplated eating it. I decide that a diet of ants might give an anty, formic acid flavour to the flesh and ate a grape instead.

It was a day or two later that the speculative news emerged that pangolin may have been offered at the Wuhan “wet” meat market carrying the novel coronavirus ready to leap from animal to human.

Whenever I read an obituary I scan immediately to age and cause.

Like an athlete looking at the clock, I am measuring my chances.

Despite my age, I figure I’m in reasonably good nick and not given to the flu.

On the few occasions that I have claimed to have the flu, I have been poo-pooed and told it’s just a cold.

The other measure is how close are we to Wuhan.

A stroll through the CBD suggests that we are closer than we think.

It used to take six weeks to get here by boat from Europe.

If you showed symptoms in the middle of the Indian Ocean, then you’d get dropped off along the way at Christmas Island.

The experts reassure us that a vaccine is a year and a half away.

My neighbour, the doctor, had a preoccupation with how fast things can spread nowadays. The whole world is a plane away.

All roads lead to the coronavirus.