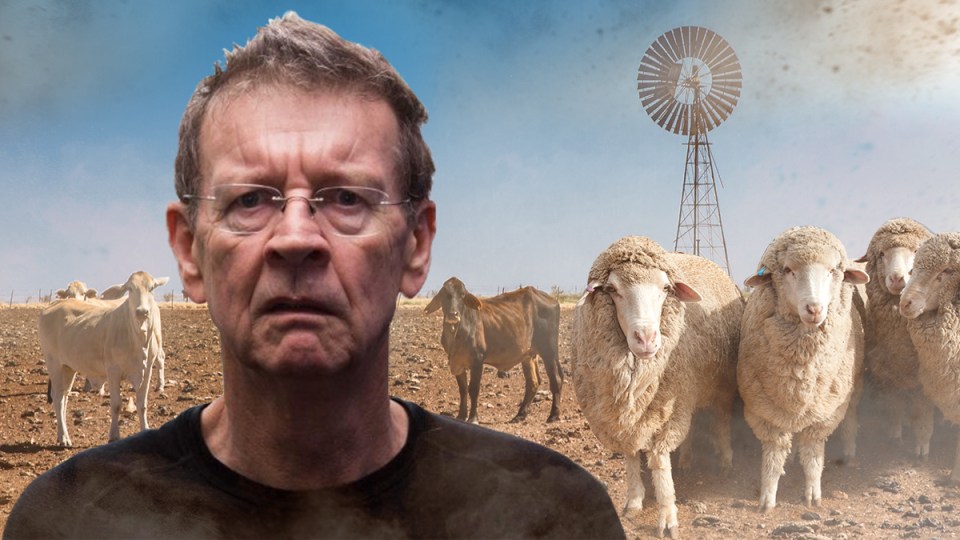 Red Symons shares a joke as he explains the origin of factoids. Photo: TND

I’m fond of a factoid.

A farmer is talking to his mate about his plans.

“I’m going to take the cattle into town to sell them. I’ll do the droving.”

His mate lifts the brim of his hat, tosses away his cigarette, stomps on it and asks, “Which route will you take?”

The farmer looks off into the flat, dry distance thoughtfully and says, “I’ll take the wife. She stuck with me through the drought.”

I believe this is the only uniquely Australian joke. It deploys a kind of pun that is evident in speech but not in writing, using a slang term not used in any other English-speaking culture.

I trust that you appreciate the modern propriety popular with the young and the woke.

First tell the joke, then deconstruct it in such a way as the humour is leached out of it and you get extra credit for virtue signalling from the high moral ground.

This template nowadays includes a heart-rending account of how, while you the reader, listener, audience are laughing, I educate you about my troubled time as a farmer’s wife.

That might stretch your credulity. I’ve never been a farmer’s wife.

I also believe that jokes should be like lemmings running towards the cliff and their doom. You establish character and trajectory, then finish with the flourish of a surprise calamity.

This is also a factoid in that the notion that lemmings leap from cliffs is probably open to debate.

To me, a factoid is an idea of interest that I am too lazy to look up and uncover the real facts.

If you could look up the lemming facts I’d be grateful. It would save me the bother despite possibly destroying a perfectly usable metaphor.

Try not to argue pointlessly and at length about it.

The traditional origin of a factoid is “some guy in a bar told me”. In my case it is more likely to be over a morning coffee. A cortado thanks.

Academics and journalists never start a piece with “I was talking to these guys, and they reckon …”

An academic may well use this source, but they invariably mask it with a compendium, at the back of the book, containing other academic sources from prominent publications.

It’s the bit that you never read.

It’s like an actor acknowledging the cameraman, the gaffer, the grip and the make-up artist while receiving an award.

A journalist will offer a factoid by naming “this guy” who “reckons” and then giving him, her or they a moderately serious title. Rather than gossiping themselves, they merely attribute the gossip to someone else.

Here are some factoids to nag at you.

The use of “fall” to describe the autumn, while now being American English, was originally medieval English. It left on the Mayflower and withered back at home.

And while we’re at it, Churchill’s, “We will fight them on the beaches” speech, in its first stanza is entirely composed of words of Anglo-Saxon and Germanic origin except for the very last word “(we will never ever) surrender”. This is of Romance or Latinate origin.

Some guy told me that. You’re welcome to dispute it.

Where was I? Ah yes, the uniquely Australian origin of the ambiguous word “route”.

In my youth, I witnessed billy goats rutting. Like duellists they stepped backwards slowly and launched themselves, accelerating to a leap from their back legs to concuss one another, smacking skull to skull.

I was told by some guy, my dad as it turned out, they did it “to impress the ladies.” (Pick me! Pick me!) while not falling into a coma.

He also said the males urinate on their heads to toughen up the skin. This is deeply factoid. I didn’t really believe him even back then.

Alright this is what I regard as the tediously uninteresting bit.
The origin of the word …

Rut: A periodic and often annually recurring state of certain male animals (such as deer or elk) during which behaviour associated with the urge to breed is displayed.

Rut : Middle French: ruit disturbance. Also from the Latin: rugire to roar.
It all seems a bit belligerent.

Maybe the cattle farmer should just get some guy to load the cattle on to a truck.