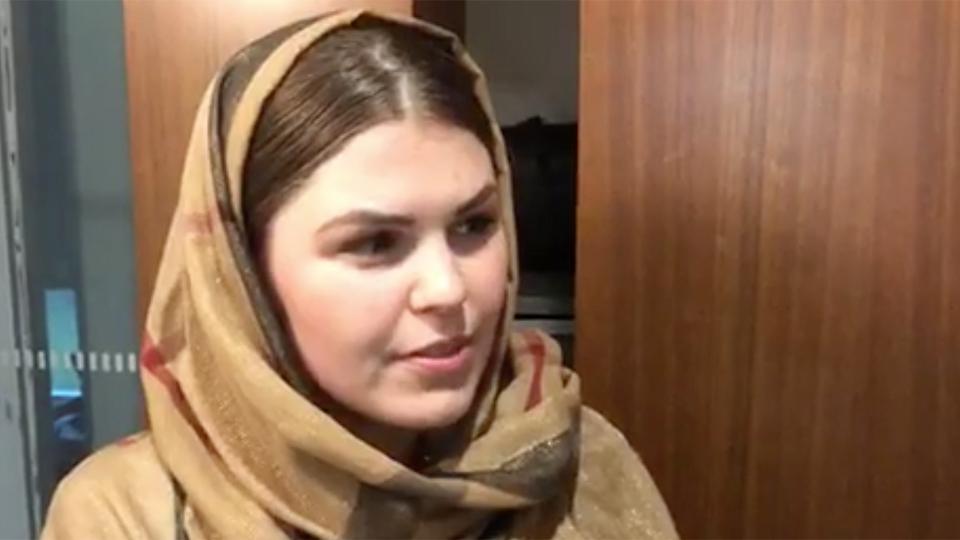 Cancer fraudster Belle Gibson has resurfaced, wearing a headscarf and claiming to have been adopted by an Ethiopian community in Melbourne.

Gibson, whose Melbourne home was raided by the Victorian sheriff’s office over an unpaid $500,000 fine on Wednesday, calls herself Sanbotu in the footage.

Introducing herself in Oromo language, Gibson speaks at length about the political situation in Ethiopia, embedding herself as part of the community and giving them advice.

“Don’t act alone, don’t act without moral, stay strong in your identity,” she tells a reporter from Shabo Media, which uploaded the footage to its Facebook page.

“My heart is deeply embedded in the Oromo people. I feel blessed to be adopted by you.”

The revelation comes less than a day after the Sheriff’s Office of Victoria seized items from the convicted former wellness blogger’s Northcote home to sell to recoup her unpaid fine.

The federal court imposed the penalty in September 2017 after Gibson was found guilty of misleading and deceptive conduct. It found she misled her readers when she claimed alternative therapies and nutrition had cured her brain cancer.

Gibson made $420,000 through a social media empire, cookbook and app based on the claims. She claimed to have donated much of her profits to charities but actually donated only about $10,000.

Gibson last appeared in court in June 2019, when it was revealed she had spent more than $90,000 in two years, including $13,000 on clothing, accessories and cosmetics. She had also travelled to Bali and Africa.

However, she said she could not pay her fine.

In the Facebook footage, Gibson discusses how the Oromo community in Melbourne is raising money for its members in Ethiopia.

She also gives an assurance her heart is deeply invested with the Oromo people, after seeing their character and values and feels ‘blessed’ to be adopted in the community after she started volunteering four years ago.

“I see no difference in your struggle and the struggle that I have for fighting for the liberation of Oromia,” Gibson says.

“This was a gift, a blessing that was given to me both by your people but also a blessing from our lord […] from Allah.”

Gibson’s Federal Court fine was imposed after action brought Consumer Affairs Victoria. The organisation said on Wednesday it would “continue to pursue Ms Gibson until [her debt] is repaid in full”.