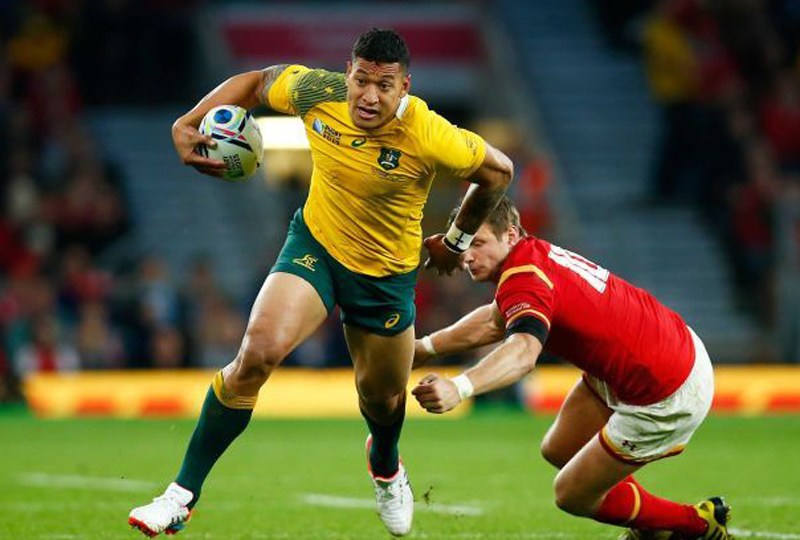 Israel Folau in action for the Wallabies in 2015.

Sacked Wallabies star Israel Folau now says he is set to lose $14 million as a result of his sacking by Rugby Australia, according to new court documents.

The documents also claim the Wallabies would have put in a “superior performance” if Folau was selected for the 2019 Rugby World Cup and he could have possibly captained “a trophy-winning Wallabies team”.

He’s now asking for damages of $14 million – up from a previous estimate of $10 million – according to an amended statement of claim released on Wednesday.

Folau’s new claims come a fortnight out from his final mediation with Rugby Australia over his unfair dismissal case. Legal teams for the sacked former star and RA are due to meet on December 13.

If those talks fail, the case will proceed to a three to five-day trial on February 4.

Folau, a staunch Christian, claims he was sacked by RA on religious grounds following an April Instagram post about gay people going to hell unless they repented. He had also demanded an apology and his contract reinstated by RA and the NSW Waratahs.

In the amended statement of claim to the Federal Circuit Court, Folau details the income he has lost since Rugby Australia tore up his contract in May.

It also details Folau’s belief that he could have earned more if he was selected as Wallabies Test captain in the future.

“Additional post-playing career monetary benefits to be derived from building upon [his] record of achievement … and two additional Rugby World Cups,” the claim states.

“Including a superior performance at the 2019 Rugby World Cup by the Wallabies than what was achieved without Folau, and possible captainship of a trophy-winning Wallabies team.”

The Wallabies exited October’s Rugby World Cup in Japan with a loss to England in the quarter finals.

Folau, a former rugby league and AFL player, would have “continued to play successfully” for the Wallabies and NSW Waratahs until his retirement, the claim states.

The document includes fresh claims RA was told by a senior Wallaby that sacking Folau could offend Polynesian players and divide the team.

“Before the hearing was conducted before the Tribunal, a senior player had told Ms (chief executive Raelene) Castle and Mr (coach Michael) Cheika that the termination of Mr Folau was likely to cause division amongst the Wallabies and that Christian Polynesians in the team were offended by the actions of Rugby Australia,” the claim states.

At least 15 teammates and coaching staff members had backed Folau following his comments, according to the documents.

In a separate social media post, Folau has also claimed transgender people are evil and should repent.

Folau had conceded his social media posts were a “low-level breach”, the claim said.

To save his contract he offered to apologise, pay a fine, serve a suspension, donate to Randwick Children’s Hospital and let RA review his future social media posts.

RA has said Folau’s expressions of faith were always supported “provided that these were done in a respectful and inclusive manner”.