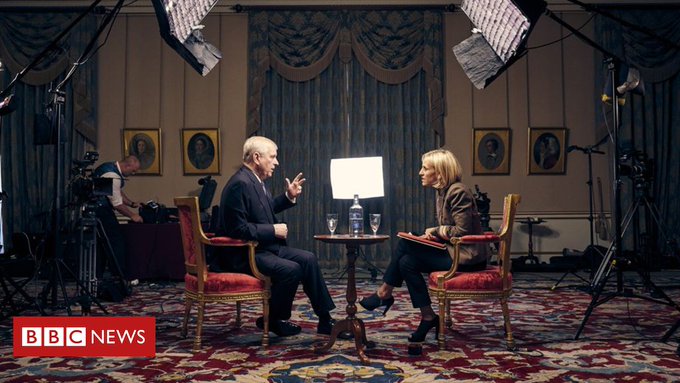 The Duke of York on the defensive in answering questions about his relationship with dead pedophile Jeffrey Epstein. Photo: Twitter/BBC

A prominent British lawyer has described Prince Andrew’s ‘no holds barred’ interview with the BBC concerning his association with the late pedophile Jeffrey Epstein as a “catastrophic error”.

In an opulent room inside Buckingham Palace this week, the Queen’s second-oldest son broke his silence for the first time to defend his decision to stay with the disgraced US billionaire.

With heavy ceiling-to-floor dark curtains drawn, sitting on red velvet Queen Anne chairs at a small mahogany round table, Andrew said he had no recollection of ever meeting Virginia Roberts Giuffre, who has publicly accused him of of having sex with her when she was 17 years old.

“I think any reputation management professional, whether lawyer or PR, is going to say that this was a catastrophic error of judgement,” British lawyer Mark Stephens, who represented James Hewitt after his alleged affair with Princess Diana, told the BBC on Sunday morning (Australian time)

“This strategy only works if you’ve got a complete and full answer to every possible question, and here there are too many loose ends,” Mr Stephens said.

In the interview with Emily Maitlis from BBC TWO’s Newsnight program at 9pm on Saturday local time, the 59-year-old Duke of York admitted he “let the side down” – the side being the royal family – by choosing to stay with Epstein at his $108 million New York mansion after the American’s first conviction.

Andrew said he “kicks” himself on a daily basis after staying with the US financier after Epstein’s conviction for paying a teenage girl for sex.

“I stayed with him and that’s … that’s … that’s the bit that … that … that, as it were, I kick myself for on a daily basis because it was not something that was becoming of a member of the royal family and we try and uphold the highest standards and practices and I let the side down, simple as that,” he said.

Prince Andrew also denied there was, or had ever been, any truth to his reputation as a playboy.

“I don’t know why I’ve collected that title because I don’t … I never have really partied,” he insisted.

“I was single for quite a long time in the early ’80s, but then after I got married I was very happy and I’ve never really felt the need to go and party – and certainly going to Jeffrey’s was not about partying, absolutely not.

“You have to remember that I was transitioning out of the Navy at the time, and in the transition I wanted to find out more about what was going on because in the Navy it’s a pretty isolated business because you’re out at sea the whole time.”

While viewers could only wonder at his claim that, as a sailor fresh from sea duty, he had no interest in slap and tickle ashore, Mr Stephens was adamant the Prince’s comments would open him up to even more scrutiny.

“What effectively Prince Andrew has done is lit the blue touchpaper and really, things are going to spiral out of control,” he said.

“If he’d kept his silence he’d have been able to remain outside of the case, as he’s a witness and is entitled to diplomatic immunity. He was a private individual and now he’s waived that privacy.”

According to a report in The Sunday Times in October, Andrew told his circle of friends he was heading to New York to end his friendship with Epstein, as the FBI ramped up its investigation.

He was reportedly feted at an intimate dinner at the house, where the FBI reportedly later found thousands of explicit photos and a safe filled with CDs labelled ‘nude girls’.

In the pre-recorded BBC interview, Ms Maitlis asked the Prince about the claim by Ms Roberts Giuffre, now 36, that she had sex with him in a house in London when she was underage.

It was put to him that in 2001, Ms Roberts dined with him and danced with him at Tramp Nightclub in London.

“She went on to have sex with you in a house in Belgravia belonging to Ghislaine Maxwell, your friend. Your response,?” the BBC asked.

Shaking his head, the Prince replied: “I have no recollection of ever meeting this lady, none whatsoever.”

When asked once more whether he remembered meeting Ms Giuffre, the prince said: “No.”

Ms Giuffre, who was previously named Virginia Roberts, has said she was forced to have sex with Andrew in London, New York and on a private Caribbean island between 1999 and 2002, when she says Epstein kept her as a “sex slave”.

Andrew married Sarah Ferguson in 1986 and the couple divorced 10 years later although they remain close friends.

After the BBC released early excerpts of the interview before its full broadcast on Saturday evening local time, Ms Ferguson sent him a message of support.

“It is so rare to meet people that are able to speak from their hearts with honesty+pure real truth, that remain steadfast and strong to their beliefs,” she said on Twitter.

It is so rare to meet people that are able to speak from their hearts with honesty+pure real truth, that remain steadfast and strong to their beliefs. Andrew is a true+real gentleman and is stoically steadfast to not only his duty but also his kindness + goodness @TheDukeOfYork pic.twitter.com/qg40lU4Qkf

A picture showing the prince with his arm around Ms Giuffre’s waist from 2001 appeared in British media. Unnamed supporters of Andrew told the Daily Telegraph newspaper in August that the picture had been faked.

When the allegations were first made, a Buckingham Palace spokesman said it was “emphatically denied” that Andrew had any form of sexual contact or relationship with her.

Andrew has previously said he stood by the palace statements. He apologised over his friendship with Epstein in August.

He has also previously acknowledged he made a mistake after a photograph of him with Epstein in New York was published in a British newspaper in December 2010.

“At no stage during the limited time I spent with him did I see, witness or suspect any behaviour of the sort that subsequently led to his arrest and conviction,” a statement read.

“I have previously said it was a mistake and an error to see him after his release in 2010 and I can only reiterate that I was mistaken to think that what I thought I knew of him was evidently not the real person, given what we know now.

“I deplore the exploitation of any human being and would not condone, participate in, or encourage any such behaviour.”

Epstein, a former investment banker, was then a registered sex offender.

The 66-year-old was found dead in his Manhattan jail cell on August 10.

‘I let the side down’: Prince Andrew speaks for the first time about Epstein and his accusers