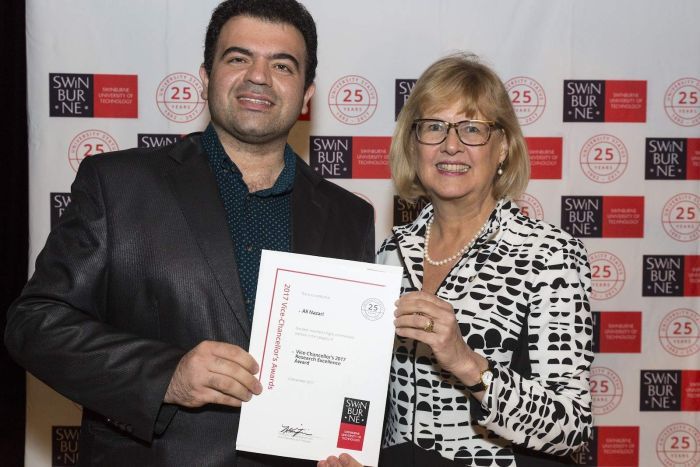 Dr Ali Nazari was the recipient of more than $1 million in funding for building and construction research. Photo: ABC: Swinburne University

A Swinburne University scientist has lost his job after an internal investigation into alleged research misconduct.

Dr Ali Nazari from Swinburne’s School of Engineering has had dozens of papers retracted by scientific journals this year over concerns about duplication of data.

It was not that long ago that Dr Nazari was photographed smiling at the Swinburne vice-chancellor’s 2017 awards ceremony.

He had just been awarded a certificate of commendation for research excellence after receiving more than a million dollars in public funding, including an Australian Research Council Discovery Projects grant.

Just two years later, the retraction notices have been coming in thick and fast, with some journal editors stating they had become aware of “author misconduct” and were concerned Dr Nazari had “followed a scheme of duplication and falsification”.

The count now sits at 30 after one journal publisher took the highly unusual step of simultaneously retracting 22 papers.

Some of the retracted papers were research on the strength and resistance of building materials like steel and concrete.

“A retraction is basically a journal or a publisher or a researcher saying ‘don’t trust what is published’,” explained Ivan Oransky, the co-founder of the Retraction Watch blog.

“It’s the nuclear option of correction in science.”

Dr Oransky has been following the case closely and said the sheer volume of retractions surprised even the experienced science journalist, who has been covering retractions for more than a decade.

“But there’s probably more to this story.”

The alleged misconduct was first picked up by a mysterious whistleblower working in the same field, who was growing concerned about the level of duplication and low-quality research they were seeing.

“When it comes to building materials, this is serious business. This drives hundreds of millions of dollars of public investments,” the whistleblower told the ABC.

“This is the stuff of building codes and industry-best practices. Human lives are on the line,” the whistleblower, who uses the pseudonym “artemisia stricta”, said.

In an encrypted email they told the ABC they started notifying journals of their concerns this year, and believe there would be more retractions to come.

“I have identified 188 papers by Nazari, which appear to suffer from some form of misconduct. In at least 30, I’ve identified falsification of results,” the whistleblower alleged.

Swinburne University completed an internal investigation and would not comment on the findings, except to say that as of the ABC’s enquiries this week, Dr Nazari was no longer employed.

The university pointed out that the retractions so far have been for papers published while Dr Nazari was working at Islamic Azad University in Iran.

But the whistleblower believes they have found problems with papers published as recently as January this year, which have yet to be retracted. They want to see an external investigation.

“Dr Nazari has recently received a number of public grants, for which he would have had to submit a CV,” the whistleblower said.

“Presumably, his superficially impressive publication record helped him to secure these grants. I think it would be appropriate to investigate whether this constituted fraudulent application.”

The Australian Research Council said Dr Nazari was listed on grants totalling $1.1 million, but would not comment on whether the retracted papers were used as the basis of grant applications.

Swinburne University declined to comment on whether any funding had been returned in the wake of their investigation.

Research retractions on the rise

Dr Nazari is a prolific publisher, listed as an author on 29 papers so far this year.

The case raises the obvious question of how some of his work came to be published in the first place.

“So I wish that I could say I was surprised that all of this made it through the peer review process,” Dr Oransky said.

“But my experience tells me that we should often be surprised when the peer review process actually captures the problems.”

He described the process as “a bit of a surface check”, saying peer reviewers are often under pressure, unpaid and rarely have access to the underlying data.

“Journals and publishers, when they’re being honest, they explain just how porous the peer review system is.”

Dr Oransky said there’s been a huge rise in the number of retractions over the past two decades, from around 40 retractions per year in 2000 to around 1,500 in recent years.

One reason is the transparency provided by the internet. Scientists can now more easily scrutinise their colleagues’ work, using sites like PubPeer to anonymously point out errors.

“Many journals have had their awakening, if you will, and realised that some of what they have been publishing over the decades was problematic, to say the least,” Dr Oransky said.

But that awakening is far from complete.

The publisher SAGE, which pulled 22 of Dr Nazari’s papers, told Retraction Watch that like many journals at the time, they were not using plagiarism and duplication checking software.

They are now, but the practice still is not industry-wide. University of Melbourne PhD student Daniel Hamilton and his team surveyed the editors at more than 300 journals, finding only half were regularly using plagiarism software.

“Given how common it is now to use plagiarism checkers I think the team had assumed that all, or the vast majority of journals, would screen all incoming papers for plagiarism,” he said.

“It was quite surprising we found only 50 percent [used plagiarism software].”

Get rid of ‘publish or perish’ incentives

Another often-cited reason retractions were on the rise was the pressure on academics facing a “publish or perish” environment.

“It’s pretty clear in the academic world that there is a bias with regards to academic promotion towards people with lots of papers — it’s more about quantity than it really is about quality,” Mr Hamilton said.

Dr Oransky said that was something that needed to change to increase public trust in science.

“We’re going through an interesting time in science where all of these issues are really coming to the fore and people are exploring them in ways that they haven’t before, a lot of it made possible by the internet and by other technology.

“It’s going to be a bit of a painful time for some scientists because things that have been hidden before are no longer hidden.”

Dr Nazari was contacted for comment but did not respond.