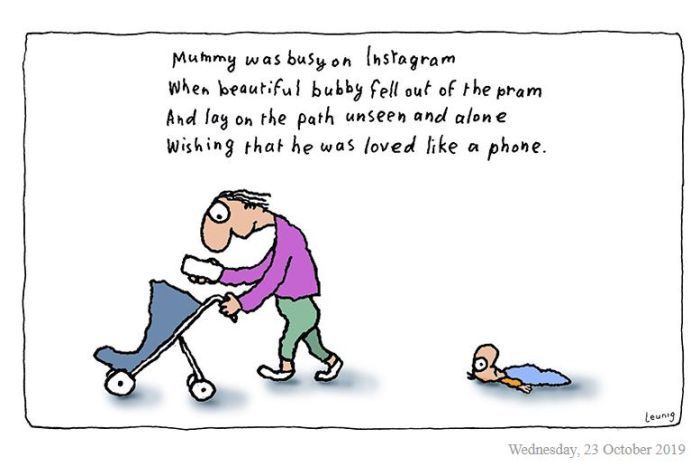 The offending Leunig cartoon appeared in The Age on Wednesday. Photo: ABC

Controversial cartoonist Michael Leunig has been accused of unfairly judging mothers in a cartoon that suggested some love their phones and Instagram more than their children.

The cartoon, published in Melbourne’s The Age newspaper on Wednesday, showed a mother reading her phone as she pushed an empty pram while an infant lay on the ground behind her.

A four-line poem accompanying the cartoon said the mother was “busy on Instagram” when her baby had fallen from the pram “unseen and alone, wishing that he was loved like a phone”.

“I bet you never spent hours walking babies around in a pram, feeling isolated and alone and terrified,” she wrote in a tweet, which has been retweeted more than 400 times and attracted more than 3500 likes.

She wrote that a lot of her time spent on her phone as a mother was for work and connecting with other mothers for support.

“But actually, none of those reasons are any of your f—ing business. If a woman is on her phone and pushing a pram, it’s nothing to do with you.”

Love this piss-take of #Leunig the misogynist. https://t.co/8dUNwvUreu

Your cartoon yesterday really hurt my feelings.
Here's one for you.

Don't worry about the Leunig cartoon, you guys. I fixed it. pic.twitter.com/9D1w7rUvI4

The ABC has contacted Leunig to invite him to respond.

Two readers of The Age took to its opinion pages on Thursday to protest the cartoon.

“Leunig, every so often your misogyny creeps out. You can’t help yourself, can you?” Kath McKay said.

It's not just about Leunig. It's about the work we expect parents, but especially mothers, to do with minimal support. It's the lack of care and respect and understanding we give for that work.

It is not the first time Leunig’s cartoons – which often offer whimsical reflections on the modernisation of society – have courted controversy.

He has previously produced cartoons challenging the science behind vaccinations, including a 2015 cartoon that depicted a mother pushing her baby away from a volley of syringes raining down from the sky.

In 2015, Leunig told the ABC he and his family had received death threats amid the backlash to the cartoon.

“‘The belligerence of the pro-vaccination is quite surprising,” he said.

“So belligerent, so angry, that one isn’t marching with the regiment. It bothers me to see the mob being so oppressive to such people.”