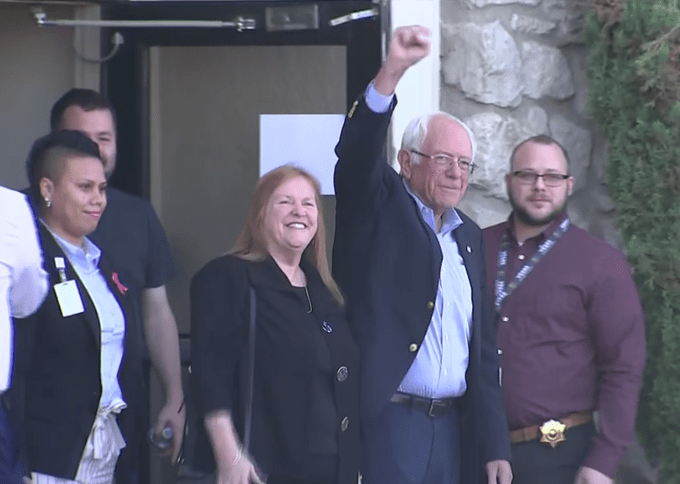 Mr Sanders, with his wife Jane, 69, (L) leaving the Desert Springs Hospital Medical Centre after two and a half days in hospital. Photo: Twitter

Democratic presidential candidate Bernie Sanders was diagnosed as having suffered a heart attack when he was taken to a Las Vegas hospital on Tuesday night.

In a statement released on Saturday morning (AEST), campaign officials said the Vermont senator was diagnosed with a myocardial infarction, otherwise known as a heart attack.

At a campaign event on Tuesday local time, Mr Sanders, 78, experienced chest discomfort and was taken to hospital.

A statement from Sanders’ doctors in Nevada was also released, saying the the Senator was stable upon his arrival in the hospital and had two stents placed in a blocked artery.

Mr Sanders was “conversing and in good spirits” on Wednesday, a senior campaign adviser said in a statement.

Mr Sanders left the Desert Springs Hospital Medical Centre on Friday and was expected to return to Vermont.

Mr Sanders posted a video on Twitter on Friday standing alongside his wife in a park in Las Vegas on Saturday (AEST).

In the brief video, Mr Sanders said he “just got out of the hospital a few hours ago,” and added, “I’m feeling so much better.”

He and his wife thanked everyone for their love and warm wishes.

Mr Sanders signed off by saying, “see you soon on the campaign trail.”

Hello everybody! We’re in Las Vegas. I’m feeling so much better.

Thank you for all of the love and warm wishes that you sent me.

See you soon on the campaign trail. pic.twitter.com/nk3wWIAuE7

The doctors said Sanders made “good expected progress” and all of his other arteries were normal before being discharged from hospital.

Campaign spokesperson Joe Calvello confirmed the self-described democratic socialist will join 11 rivals in the US state of Ohio on October 15 for the next Democratic presidential debate on the campus of Otterbein University outside Columbus, Ohio.

It is unclear when Mr Sanders will resume campaigning, but recent polls on the Democratic presidential race have Mr Sanders in third place, behind Elizabeth Warren of Massachusetts and former Vice President Joe Biden.