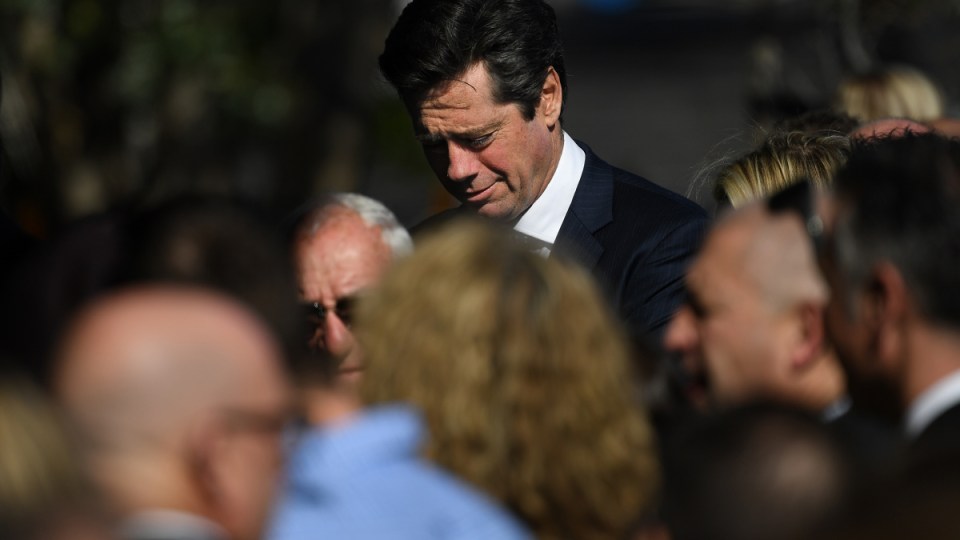 Thousands of family members, friends and fans of Danny Frawley have come together to pay their respects and say a final goodbye to the St Kilda legend.

Frawley was remembered at a private funeral service for family and friends at Kingston Town Hall on Wednesday afternoon, telecast on Fox Footy and played on large screens at Moorabbin Oval, where mourning fans have gathered.

Football heavyweights Tony Lockett, Garry Lyon, Eddie McGuire, Jason Dunstall, Wayne Carey and Eric Bana were among the mourners to arrive at the service, described by master of ceremonies Hamish McLachlan as a celebration of Frawley’s life.

Many wore a touch of blue, as requested by the family in a tribute to Frawley’s mental health battle and beyondblue.

Wayne Campbell recalls some of the hilarious one-liners that Spud use to come up with.https://t.co/6nwRFQYzhY

After the service, a guard of honour was to be formed at Moorabbin as a hearse carrying Frawley did a final lap of honour around the ground where he played 72 of his 240 AFL games.

Emotional tributes have flowed since Frawley died on September 9, in a single-vehicle accident when the ute he was driving hit a tree near Ballarat.

On Monday, Frawley’s wife Anita revealed the family’s heartache at this death. She said he had stopped treatment and medication for his depression in the months leading up to his sudden death.

Frawley, who spoke bravely of his battles with mental health issues in recent years, is survived by his wife Anita and their three daughters, Chelsea, Danielle and Keeley, along with his mother and five siblings.

The Saints’ Moorabbin headquarters quickly became the focal point for the outpouring of grief following Frawley’s death a day after his 56th birthday.

A makeshift shrine was set up outside the club’s main entry, with floral tributes, scarves and guernseys left by fans.

A pictorial tribute was also set up in a display case in the club’s Hall of Fame.

All for you, Spud ❤️ pic.twitter.com/K3h9nsFbT7

Well known for his exploits on the field, then as a coach and media personality, the larger-than-life character became a strong advocate for mental health issues when he revealed his own battle with depression.

Instead of flowers, Frawley’s family requested donations to beyondblue.

Thousands turn out for funeral of footy champ Danny Frawley