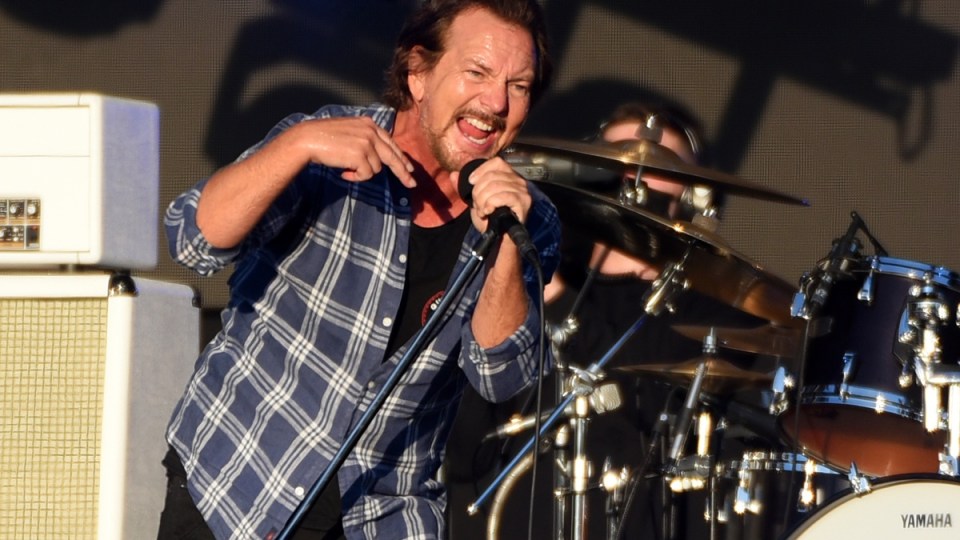 The effects of Europe’s record-setting heatwave and disastrous fires are being felt in surprising areas, with rockers Pearl Jam blaming them for a snap decision to cancel a Vienna concert.

The concert was called off just hours before the band was due to hit the stage in Austria on Wednesday (local time).

“To all those who were anticipating a great Pearl Jam show tonight in Vienna, we were too,” it said.

“However, due to the extreme circumstances at the last outdoor site outside of Paris [heat, dust, and smoke from the fires] our singer Ed Vedder’s throat was left damaged.”

The band said Vedder was being treated by doctors but his vocal chords were yet to recover.

“This is brutal news and horrible timing … for everyone involved. Those who work so hard to put on the shows as well as those who give their precious time and energies to attend,” the statement said.

“As a band, we are deeply sorry and have tried to find options to still play. And Ed wants to play. There’s just no throat available at this time… So very, very deeply sorry.”

The Vienna show was part of Pearl Jam’s European tour. The next concert is scheduled for Friday in Prague, although it is not yet known if Vedder will be able to perform.

Scientists have blamed climate change for the extreme heat wave that has hit Europe this week, sparking fires in France, Spain and even Britain.

“We have known that these temperatures are now possible in the UK and that 40 degrees in London is really not something that extreme anymore because we have we are living now in a world that is a lot warmer already,” climate scientist Friederike Otto told Rolling Stone.

“Also, it was forecast almost two weeks in advance. We knew that this heat was coming.”

At least 13 people have died in Britain while swimming during this week’s searing heat, which has also damaged train tracks and triggered warnings that efforts to tackle climate change needed to be stepped up.

The London Fire Brigade endured its busiest day since World War II on Tuesday, when temperatures topped 40 degrees for the first time, igniting fires that destroyed dozens of properties in the capital and torched tinderbox-dry grassland at the sides of railway tracks and roads.

“We’ve got nothing, everything’s gone,” Timothy Stock, a resident who lost his home to fire in the village of Wennington, east of London, told the BBC.

Thirteen people lost their lives after “getting into difficulty in rivers, reservoirs and lakes while swimming in recent days – seven of them teenage boys”, British minister Kit Malthouse told parliament on Wednesday.

At least 41 properties were destroyed in London and more than a dozen elsewhere, Mr Malthouse said.

Many trains heading from London to northern England were delayed or cancelled on Wednesday after the heat from fires buckled heavy train tracks, while signalling equipment and overhead lines were also damaged.

Britain registered a record temperature of 40.3 degrees in central England on Tuesday, while 34 sites surpassed the previous high of 38.7 degrees in 2019.

Forecasters predicted a much cooler day on Wednesday, with outbreaks of rain later.

Britain’s government has defended its environmental record, touting its decision to move to a net zero status. But ministers have admitted it will take years to upgrade its infrastructure to cope with the heat.

“The sad reality is this is what the future for London and the UK is likely to look like if we don’t take strong action now on the climate crisis,” said London Mayor Sadiq Khan, a member of the opposition Labour Party.

The Met Office’s Chief of Science and Technology Stephen Belcher said that unless greenhouse gas emissions were reduced, similar heatwaves were likely to repeat in Britain every three years.

At one point on Monday, two airport runways were forced to close due to damage to the surface. Power companies faced outages as the heat scorched their equipment, many schools closed early and zoos struggled to keep pets cool.

“This is a reminder today, I think, of the importance of tackling climate change because this is a remarkable unprecedented event,” Treasury Minister Simon Clarke said.