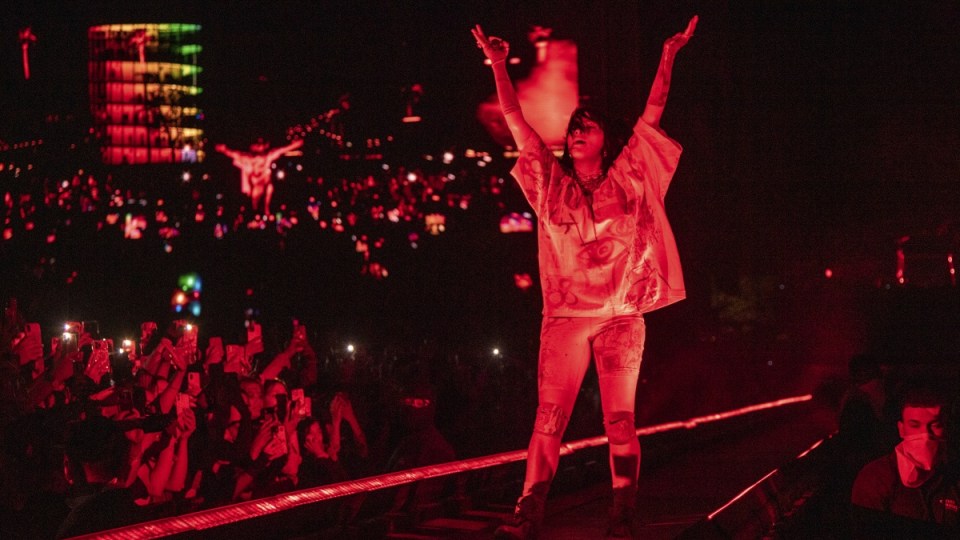 Billie Eilish has laughed off an on-stage tumble as she headlined the second Saturday of the Coachella music festival.

The pop megastar told fans in California she had fallen on her face after tripping over a piece of fire safety equipment in the darkness between songs.

The 20-year-old Oscar winner played an explosive set that involved the use of a crane, as well as wholesome touches, including a duet with her brother and co-writer Finneas and a compilation of home videos.

Finishing up one of her numbers, Eilish cried out, then laughed, declaring: “You guys, I just ate s— up here”.

Fans were treated to a range of Eilish’s hits, including Bury A Friend, Oxytocin, Bad Guy and Happier Than Ever.

A compilation of baby videos, including clips of Eilish playing with her brother and parents, accompanied Getting Older.

While performing her song Ocean Eyes, written when she was just 13, Eilish was raised six metres into the air on a mechanical platform and hovered above the crowd as she sang.

She also brought out Paramore singer Hayley Williams as a surprise guest to perform a rendition of Misery Business, and later helped to close the set.

On Friday, fellow Coachella headliner Harry Styles brought out Lizzo to duet his One Direction hit What Makes You Beautiful.

Elsewhere at Coachella, the curtain came down for US rap seven-piece Brockhampton, which delivered its final live performance together as a group.

This year’s festival took place in the southern Californian city of Indio.

Electro supergroup Swedish House Mafia and Canadian megastar The Weeknd were scheduled to split the headline slot on the final Sunday.