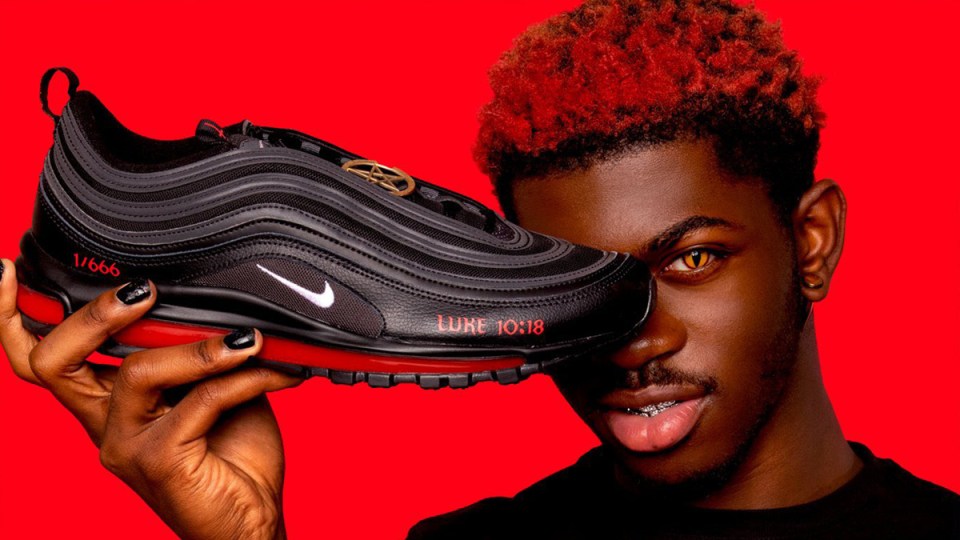 An unholy row has broken out between sports giant Nike and a rapper over a controversial range of “Satan shoes”.

The shoes have been something of a marketing super storm. They sold out in less than a minute when just 666 pairs were released at $US1018 ($A1333) each on Monday (US time).

But Nike is furious. It has launched a trademark infringement lawsuit in New York, arguing that MSCHF’s design created a “likelihood of injury to Nike’s business reputation and goodwill”, according to Newsweek.

Nike says the shoes created a “likelihood of consumer confusion, mistake, and deception as to the source of origin or relationship of Nike’s products and MSCHF’s Satan Shoes, and has otherwise competed unfairly by unlawfully trading on and using” the sports giant’s trademarks without permission.

“We do not have a relationship with Lil Nas or MSCHF,” Nike told CNN.

“Nike did not design or release these shoes and we do not endorse them.”

The black shoes feature a bronze pentagram, have “Luke 10:18” along the sides, and – reportedly – each contain a drop of human blood.

They were released as part of the rollout of a long awaited single from Lil Nas. The video that accompanies Montero (Call Me by Your Name) features the rapper sliding down a stripper pole to hell to seduce and then kill the devil.

“Our kids are being told that this kind of product is, not only OK, it’s exclusive,” she wrote on Twitter.

“Do you know what’s more exclusive? Their God-given eternal soul.”

In response, Lil Nas X posted a video to his official YouTube account titled Lil Nas X Apologizes for Satan Shoe. But it cuts within seconds to a scene from his new music video, with the rapper dancing provocatively with a devil character.

Lil Nas X responded to the backlash about the video and the shoes at the weekend.

“I spent my entire teenage years hating myself because of the s–t y’all preached would happen to me because i was gay,” he wrote.

“So i hope u are mad, stay mad, feel the same anger you teach us to have towards ourselves.”

Rapper sparks one hell of a row with ‘Satan shoes’