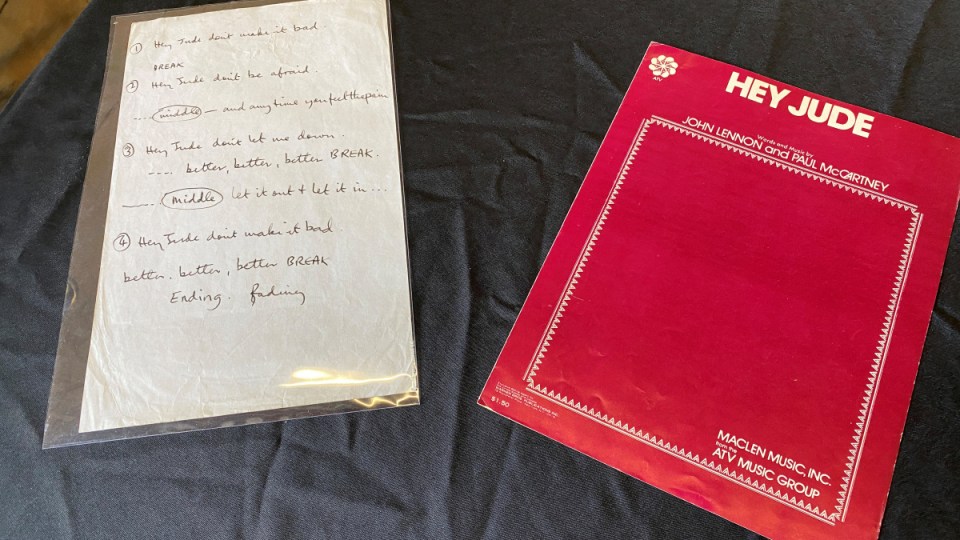 Handwritten lyrics to Beatles hit Hey Jude by Sir Paul McCartney have sold for a huge sum at an auction marking 50 years since the band split. Photo: Reuters

Beatlemania is alive and well, as 250 items from the iconic band went under the hammer, with many attracting massive bids.

Sir Paul had written the words in black felt tip pen and the lyrics sheet was used during a recording session by the Fab Four at London’s Trident Studios.

In response to the coronavirus pandemic, auction staff accepted digital real-time bids via phone and online from remote locations.

The online sale marked 50 years since the band broke up.

A vintage Ludwig branded bass drumhead, bearing the The Beatles logo and used during a performance at the Cow Palace Arena in San Francisco on August 19, 1964, fetched $US200,000 ($A315,000), four times its estimate.

That performance was the opening concert of The Beatles’s first North American tour.

Following the concert, the back-up kit was returned and the skin bearing The Beatles logo was removed and later given to Coast Wholesale VIP client Ken “Kenny” Williams, owner of the San Francisco store Drum Land, where it was then displayed on the store wall for three decades.

A script page for the Hello, Goodbye music video, complete with handwritten drawings, notes and ideas from John Lennon, George Harrison and Beatles roadie Mal Evans, fetched $US83,200 ($A131,000).

An original lacquer disc recording of Beatles album Get Back, believed to have been created by producer Glyn Johns, sold for $US32,000 ($A50,400).