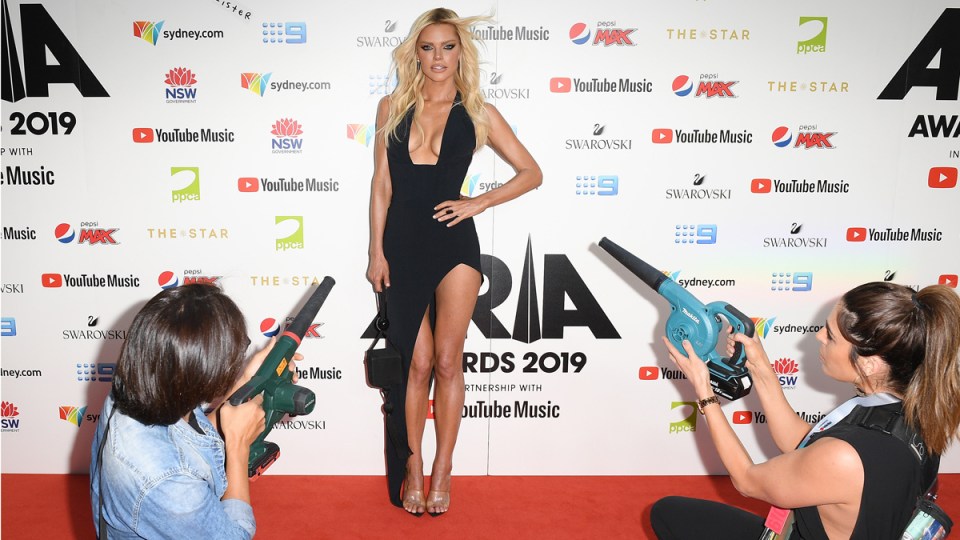 Sophie Monk gets some assistance for her red-carpet arrival at the ARIA awards in Sydney on Wednesday. Photo: AAP

Australian music’s night of nights may be peppered with big international acts, but it was Byron Bay local Tones And I who was the name on everyone’s lips on the red carpet.

The 33rd ARIA awards kicked off in style on Wednesday with former Bachelorette Sophie Monk breezing quickly past reporters on the red carpet flanked by two assistants holding cordless airblowers, ensuring her signature blonde locks were perfectly windswept for photographs.

Who wore it best? Here are the looks you won’t forget from the 2019 ARIA Awards Red Carpet, thanks to @swarovski #ARIAs #SparkDelight pic.twitter.com/Nwxuo5RXqH

But Aussie singer Tones and I – nominated for the most awards this year – was the name on everyone’s lips, breezing through the red carpet early dressed in fluoro green and fresh from a coveted US televisionappearance on Jimmy Fallon’s Tonight Show.

YAAS! @tonesandimusic is in the building and ready to talk all things #ARIAs with @Smallzy 😍 pic.twitter.com/iQfek5snRc

“She’s like No.1 all around the world,” Aussie singer Dean Lewis proudly told AAP.

Also arriving from the US was Newcastle local Morgan Evans, a country music star nominated for two ARIAs this year who flew home from Nashville on the heels of his world tour to perform at the awards night.

“I’ve been so busy the last couple of years travelling around the world playing and it’s funny you realise that all you want is to be accepted where you come from,” he told AAP.

“This is the award show I grew up watching and wanting to be a part of.”

First-time nominee Baker Boy said he was excited to be up for three awards this year.

The Darwin-born indigenous rapper, who said he grew up watching Yothu Yindi and Jessica Mauboy, said the world was paying attention to Australian music’s potential.

“People don’t necessarily know what I’m rapping about because it’s in my native language but people are paying attention,” he said.

“And you can feel the world is watching Aussie talent more and more.”

The world may be watching, but so is idol Jessica Mauboy, who could still remember performing for Baker Boy when he was at school.

“Look where he is and all the work he did, it makes me proud,” she said.

“I don’t think we realise as role models, or as just passionate music lovers, the impact we can have.”

Pnau, who won the ARIA for best dance release last year, said despite the lack of live music venues, there was still plenty of Australian talent.

“There is a lot more people in Australia making music than when we first started,” Pnau said.

“I think access to technology had really helped as well as streaming services.”

.@kiradivinesays is dazzling and ready to walk the 2019 #ARIAs Red Carpet pic.twitter.com/EgBwsXmBpk

As always, the ARIAs delivered its share of wacky moments on the red carpet with Bob Irwin wearing a snake named Larry draped around his shoulders.