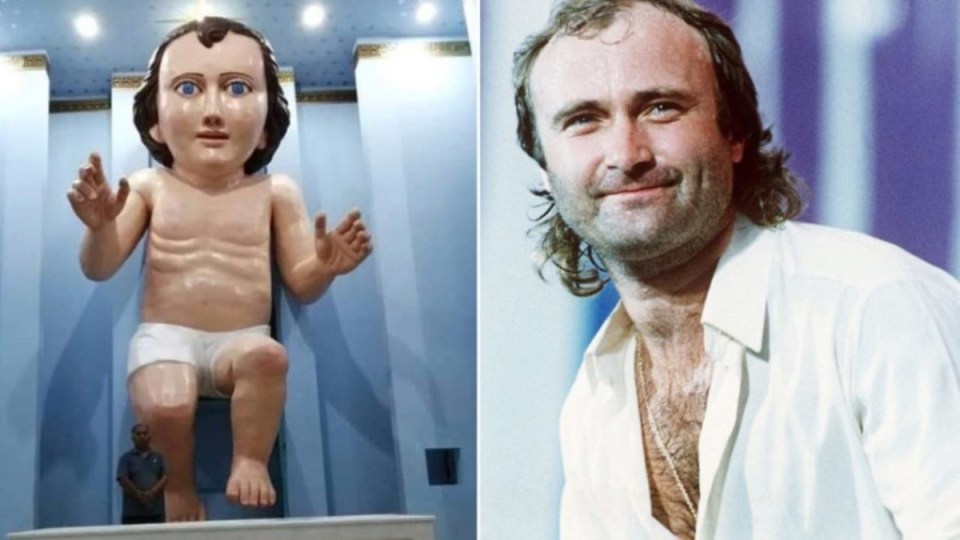 Are we witnessing the Genesis of the world's largest tribute to Phil Collins? Photo: Supplied

Can you feel it in the air — or is it just our imaginations?

A giant sculpture of baby Jesus commissioned by a church north-west of Mexico City has sent the internet’s hearts racing, largely due to its uncanny resemblance to Genesis frontman Phil Collins.

Standing around 6.7 metres tall, the Zacatecas church hailed the statue as the world’s largest of the young religious figure.

But with thick locks of brown hair styled in near-identical manner to that of the famed 1980s British musician, their likeness quickly gained notoriety.

A church in Zacatecas, Mexico has unveiled a 22 foot statue of Jesus, that looks exactly like Phil Collins pic.twitter.com/H2PbYk5Mon

However, others instead proffered the 900-kilogram behemoth looks more like cult American actor Nicolas Cage.

The New York Post reported the giant baby was transported more than 12 hours across the country, from the city of Chimalhuacán to its new home at La EpifanÍa del Señor.

Reverend Humberto Rodriguez suggested the scale of the fibreglass, resin, automotive paste and automotive paint work, which took more than a year to create, was by pure accident.

“There is a space of between 26 feet between the ceiling and the floor and I ordered a statue measuring 21 feet, but I never intended to make it the biggest baby Jesus statue in the world,” Reverend Rodriguez said.

“It is an unprecedented work.”

Reverend Rodriguez, unsurprisingly, refused to comment on any links between his statue and Phil Collins.

While many saw the hilarity, at least it was not a monumental disaster – unlike a certain botched revamp of a historic Jesus fresco that became known as ‘Monkey Christ’.