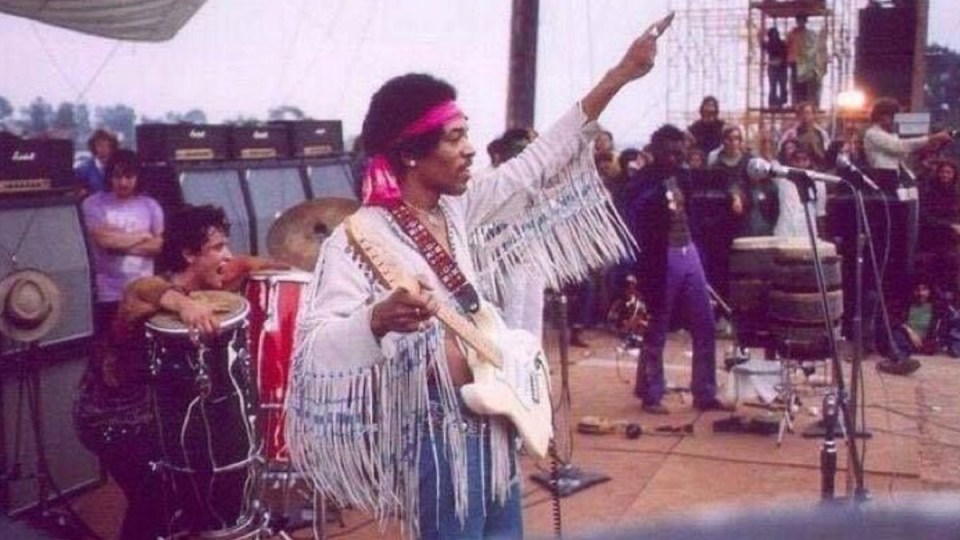 Jimi Hendrix takes the Woodstock stage as the crowd streams out on the last day. Photo: Getty

Fifty years after Woodstock, legends about the music festival are tightly braided with the reality of its three chaotic days.

The 1969 show was muddy enough (literally and figuratively) for many people to believe both the myths and the debunking, sometimes simultaneously.

Here are five other Woodstock stories that, like the brown acid, turned out to be problematic.

Myth: Joni Mitchell wrote the anthem Woodstock about her experiences at the festival

Reality: Mitchell never made it to Woodstock – she was stuck in a hotel room in New York City.

She had been planning to accompany Crosby, Stills, Nash and Young to the festival, but when their joint managers, David Geffen and Elliot Roberts, saw how chaotically Woodstock was unfolding, they instructed her to stay in New York.

She had an important appearance booked on The Dick Cavett Show taping the Monday afternoon after the festival ended, and they were worried she wouldn’t make it back in time.

“I was the girl of the family and, with great disappointment, I was the one that had to stay behind,” Mitchell told writer Dave Zimmer for his 1984 biography of Crosby, Stills and Nash.

She put aside her bitterness to write a song exalting the festival as a holy gathering, informed by the footage she saw on television and the stories she heard from her then-boyfriend Graham Nash.

CSNY had a hit single with its version of it in 1970, while Mitchell included the song on her album Ladies of the Canyon.

“By the time we got to Woodstock we were half a million strong,” she sang, probably overstating the attendance by about 100,000 people.

“For a herd of people that large to co-operate so well, it was pretty remarkable,” she told Zimmer – the first three times she performed the song live, she burst into tears, she said, moved by the miracle she hadn’t witnessed.

Myth: The weekend was all hippie good vibes

Reality: While many people commented on the air of bonhomie at Woodstock – where a utopian spirit triumphed over rain, paralysing traffic jams and not enough food – that didn’t mean that everyone held hands and sang the Youngbloods’ Get Together all weekend long.

With hundreds of thousands of people in close quarters, some will disagree.

Most notably, Abbie Hoffman, the anarchist and political activist, got onstage during the Who’s set, around 5.30am on Sunday.

High on LSD, he grabbed a live microphone and shouted about the injustice of John Sinclair, the manager of the MC5 and founder of the White Panther Party, serving a 10-year prison sentence for possession of marijuana.

The guitarist Pete Townshend profanely told Hoffman to get off the stage and then got physical about it.

“Feeling malevolent, I knocked Abbie aside using the headstock of my guitar. A sharp end of one of my strings must have pierced his skin because he reacted as though stung, retreating to sit cross-legged at the side of the stage,” Townshend wrote in his 2012 autobiography Who I Am.

“I was always absurdly territorial about our performance space.”

Myth: Woodstock was a commerce-free zone

Reality: Although Woodstock’s promoters gave up on collecting tickets or money early on when it became clear that throngs of young people would be attending the show without paying the mandated $18 for a three-day pass, that didn’t mean they were unconcerned by cash.

The festival’s origin story: Joel Rosenman and John Roberts came into some money and placed an ad in The New York Times and The Wall Street Journal reading, “Young men with unlimited capital looking for interesting, legitimate investment opportunities and business propositions”, which led them to the hippie entrepreneurs Michael Lang and Artie Kornfeld.

The quartet discussed opening a recording studio in Woodstock – the festival was originally intended to promote it.

On the weekend of the festival, even as the four promoters scrambled to provide food and water for the crowd, they ran up against a reality of rock promotion: Musicians generally don’t want to perform if they don’t get paid.

They had to convince a local bank to open on a Saturday night and loan them the necessary cash.

The Woodstock backers didn’t break even at the gate, but they made a lot of money from secondary income streams in the years after the show, like the concert film and the triple-LP soundtrack: Eleven years after Richie Havens opened the show, Woodstock finally went into the black, its organisers said in 2009.

Myth: The Peanuts comic strip took inspiration from Woodstock, not the other way around

Reality: The cartoonist Charles Schulz first introduced Snoopy’s sidekick in a March 1966 Peanuts strip, but the character was nameless until June 1970 – when Schulz called the bird ‘Woodstock’ in an effort to appeal to the younger generation.

The name flipped the character’s intended gender; Schulz had thought of the bird as female, but decided the Woodstock name was male.

Schulz had, however, already made an impact on the Woodstock cohort: The Grateful Dead keyboardist Ron McKernan was widely known by the nickname ‘Pigpen’ – his poor hygiene reminded people of the perpetually unkempt Peanuts character Pig-Pen.

He was the Dead’s first frontman, and while he had trouble with the band’s more experimental turns, he remained a reliable blues singer until his death in 1973.

At Woodstock, Pigpen had been singing a show-stopping version of Turn on Your Love Light for more than half an hour when the Grateful Dead’s show actually stopped – the band’s amps overloaded, which concluded the set.

Myth: Jimi Hendrix electrified hundreds of thousands of people with his version of The Star-Spangled Banner

Reality: Hendrix was the closing act at Woodstock – after a series of incendiary live performances, including setting his guitar on fire at the 1967 Monterey Pop Festival, nobody wanted to follow him.

The Jimi Hendrix Experience had broken up, so Hendrix pulled together a pickup band he called Gypsy Sun and Rainbows, and spent the weekend of Woodstock rehearsing with the band, enjoying himself and not sleeping.

Because of the festival’s delays, Hendrix didn’t take the stage until 9am on Monday, following the kitschy 1950s revivalists Sha Na Na.

By most estimates, at least 90 per cent of the audience had left at that point, returning to their ordinary lives – and the exodus continued steadily throughout his set.

Hendrix played The Star-Spangled Banner as part of a half-hour medley near the end of his performance, just before segueing into Purple Haze.

He had done the American national anthem dozens of times before, but this electrifying version, three minutes and 46 seconds, wouldn’t become iconic until the Woodstock movie was released the following year.

Full of audio pyrotechnics and feedback, it became the anthem for a nation at war, and the most enduring musical moment from a festival of peace.