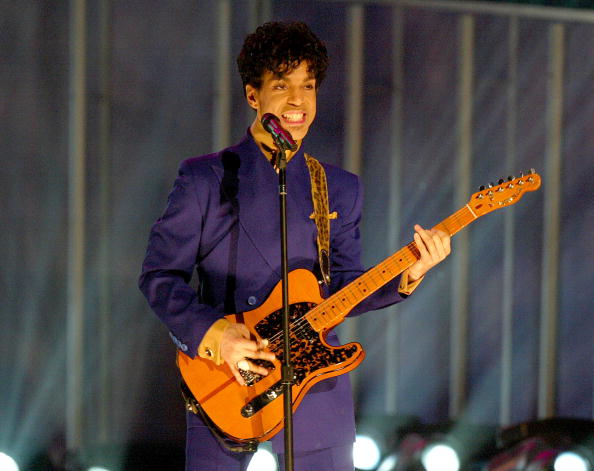 One of Prince’s many nicknames was The Purple One. It was reportedly his favourite colour, and after the success of Purple Rain, its use defined his image and his legacy.

Now, it is set to do so in perpetuity, as the late singer’s estate looks to claim ownership over the use of “the colour purple” in films and live and recorded music.

Paisley Park Enterprises, his company, filed an application earlier this month with the US Patent and Trademark Office to do just that.

“The [trademark] consists of the colour purple alone,” the application states.

In particular, Prince’s people are trying to secure exclusive rights to shades similar to Love Symbol #2, which Pantone created last year in memory of the late singer, who died of a drug overdose in 2016.

“The colour purple was synonymous with who Prince was and will always be,” Troy Carter, an entertainment adviser to Prince’s estate, said at the time.

The new application says Prince has been using purple as part of his identity since 1984, the year Purple Rain was released.

That album, a soundtrack to the film of the same name that starred the singer, went on to dominate charts worldwide and has sold tens of millions of copies.

Can you claim ownership over a colour?

You can protect the use of a colour – and more specifically a particular shade – within a certain industry. So, for example, Prince’s estate is trying to make sure no other musicians start draping themselves, their album covers or their stages in purple.

This has happened before.

In 2012, a court in the US allowed shoemaker Christian Louboutin to trademark red soles, after the company sued Yves Saint Laurent over a YSL line that had a similar look.

The court said that the red soles had “the requisite ‘distinctiveness’ to merit protection”.

In Australia, the battleground has been green.

In 2014, Energy company BP lost a 12-year battle to trademark the colour, while Coca-Cola, which is behind the energy drink Mother, prevailed over the maker of the V energy drink in a similar case.

Purple also got a mention here, with a long-running dispute between chocolate makers Cadbury and Darrell Lea that focused on the use of that colour.

Matthew Rimmer, a professor of intellectual property and innovation law at the Queensland University of Technology, said colour had begun to feature more often in trademark applications by brands, who feel it is as important as a certain term, shape or image.

“In the 1990s, there was a push to recognise so-called new signs under trademark law, including colours and scents, sounds and three-dimensional shapes,” he said.

But colours can have many different connotations, he said – purple, for example, has symbolised women’s suffrage and gay rights – leading to debate about how widespread the practice of trademarking specific colours should become.

Is this a way to monetise Prince’s legacy?

There certainly is a lot activity when it comes to Prince’s estate.

The filing is one of dozens associated with the pop star. Also this month, Paisley Park Enterprises sought to trademark the phrase “purple one” in relation to concerts, music, video games and various assorted consumer goods.

The filing covering the colour purple also mentions “operating a museum and providing guided tours of the museum”. You can currently take a guided tour of Paisley Park, Prince’s private estate.

“Obviously there have been, often tensions over who thinks they can lay claim to the memory of such cultural icons.

“I think this is one element of a larger strategy that is going to be deployed.”

Throughout his career, Prince was well-known for fiercely protecting – and thus, monetising – his intellectual property.

An ardent critic of the internet, he sued YouTube and eBay in 2007 for hosting his copyrighted music.

In 2013, the Electronic Frontier Foundation, a group that supports internet freedom, jokingly awarded The Purple One its inaugural Raspberry Beret Lifetime Aggrievement Award, for what it said was an abuse of rules allowing copyright holders to issue takedown notices.