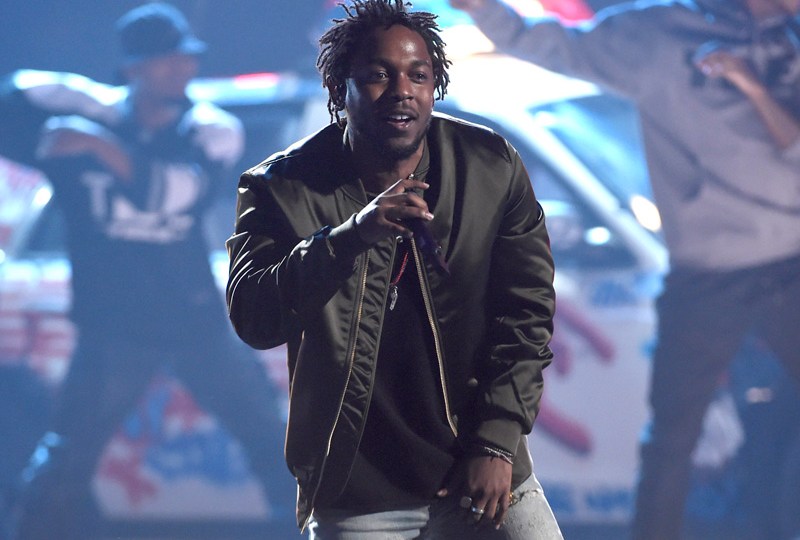 Already an international superstar, Kendrick Lamar's top spot on Triple J's Hottest 100 is another gem in the rapper's crown. AAP

Another year, another Triple J summer countdown, and – your 2017 Hottest 100 winner is none other than American rapper Kendrick Lamar.

As many music insiders predicted – but few Lamar fans dared hope – the rapper snatched the coveted top spot in Australia’s premier youth music countdown from local indie rock outfit Gang Of Youths, who came in at #2 with ‘Let Me Down Easy’. 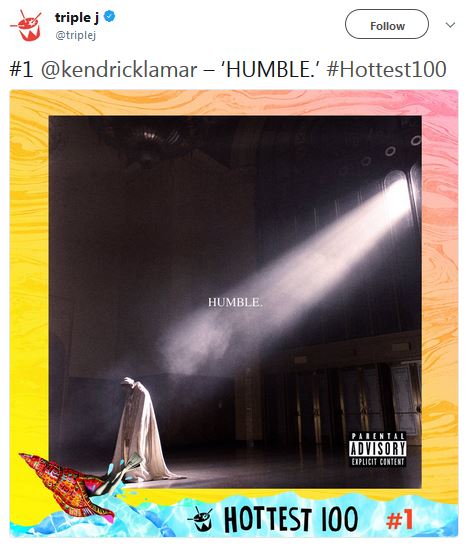 The rapper’s win has received a mixed response from Triple J fans, many of whom feel Lamar (a mainstream US artist) is too middlebrow to win what most consider to be an indie countdown. “This has ruined my life!” complained one Facebook user on Triple J’s page.

Despite the detractors, there’s plenty to celebrate in Lamar’s win. The rap sensation is the first person of colour to top Australia’s iconic music countdown, and what a year for that milestone to be overrun. 2018 marks the first year Triple J has held the countdown on a day other than Australia Day since 1998 – a decision made by the broadcaster after a public vote about the controversial date. 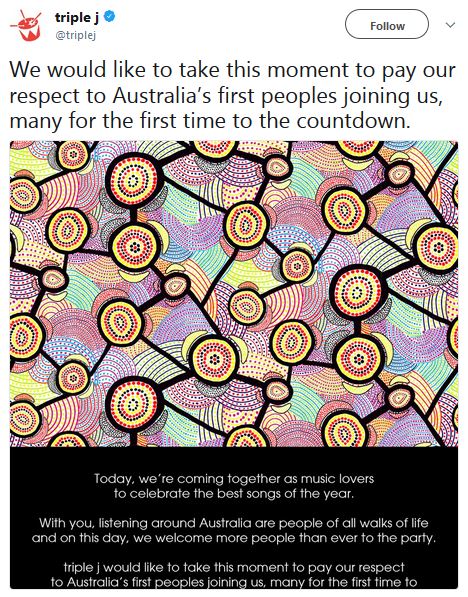 Triple J celebrated the date change by partnering again with AIME to raise funds for the mentoring program – and raised over $220,000, which is double the sum raised by listeners in 2016.

Fans celebrated as emerging local songstress Alex Lahey cracked the countdown with two of her recent hits, “I Haven’t Been Taking Care Of Myself” and “Everyday’s The Weekend”.  Hottest 100 stalwarts Angus and Julia Stone returned with two tracks, “Snow” and “Chateau”, which came in at #3.

Indigenous multi-talent Baker Boy also saw his killer track “Marryuna (Ft. Yirrmal)” slip into the top 20, which makes it the first track with an Aboriginal language ever to crack the top 20. Baker Boy raps in English and the Yolngu Matha language on the track).

And in terms of international super talent, Canadian hip-hop heartthrob Drake sneaked in his hit “Passionfruit” at #35, while Lorde’s critically acclaimed album Melodrama appeared on the countdown a whopping four times, with her worldwide number-one hit “Green Light” coming in at #6 on the Triple J list. 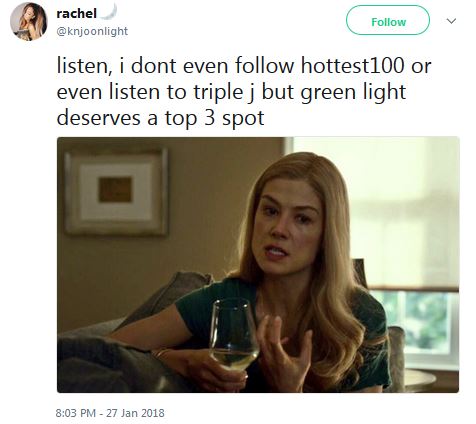 Triple J was so pleased with Lamar’s prestigious win, they played HUMBLE twice in a row when the winner was announced at around 8.13pm on Saturday, which was more than enough of an excuse for fans of the song – and fans of Kendrick – to go wild online. 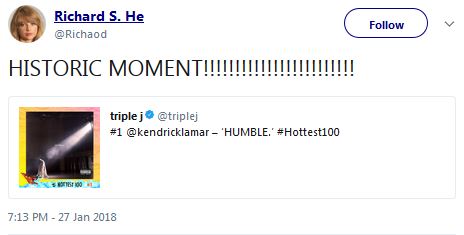 As with every year, there are some seriously stoked fans and some disappointed punters nursing hurt feelings and warm tinnies at the end of the night. But the stats are in and the king has been crowned