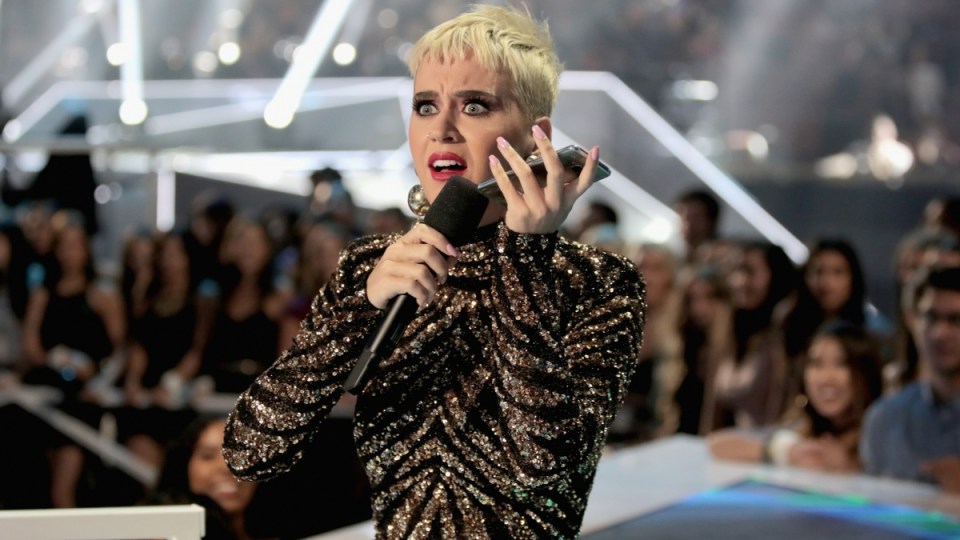 Katy Perry is one of the acts coming to Australia in 2018 – but seeing her will cost you a pretty penny. Photo: Getty

Live music is supposed to be fun, right? The image is wild and free. But concert ticket prices have risen to incredible highs.

Hot acts coming to Australia in 2018 are pricing tickets so high it’ll make your eyes bleed.

Bruno Mars wants $591 for the top-level tickets to his show. Katy Perry, meanwhile is asking for $738 a seat. Taylor Swift trumps them both with a top level price over $800.

These prices include so-called VIP experiences, but don’t get the impression you’ll be swigging champagne and joking with the artist in the limo on the way to the arena.

The Bruno Mars 24K VIP experience seems to be basically access to a bar, canapés for an hour before the show and a laminated ticket to take home.

Cheaper tickets are available of course – until sold out. The rising price of top concert tickets has been dragging up the prices of the “cheap seats” as well. 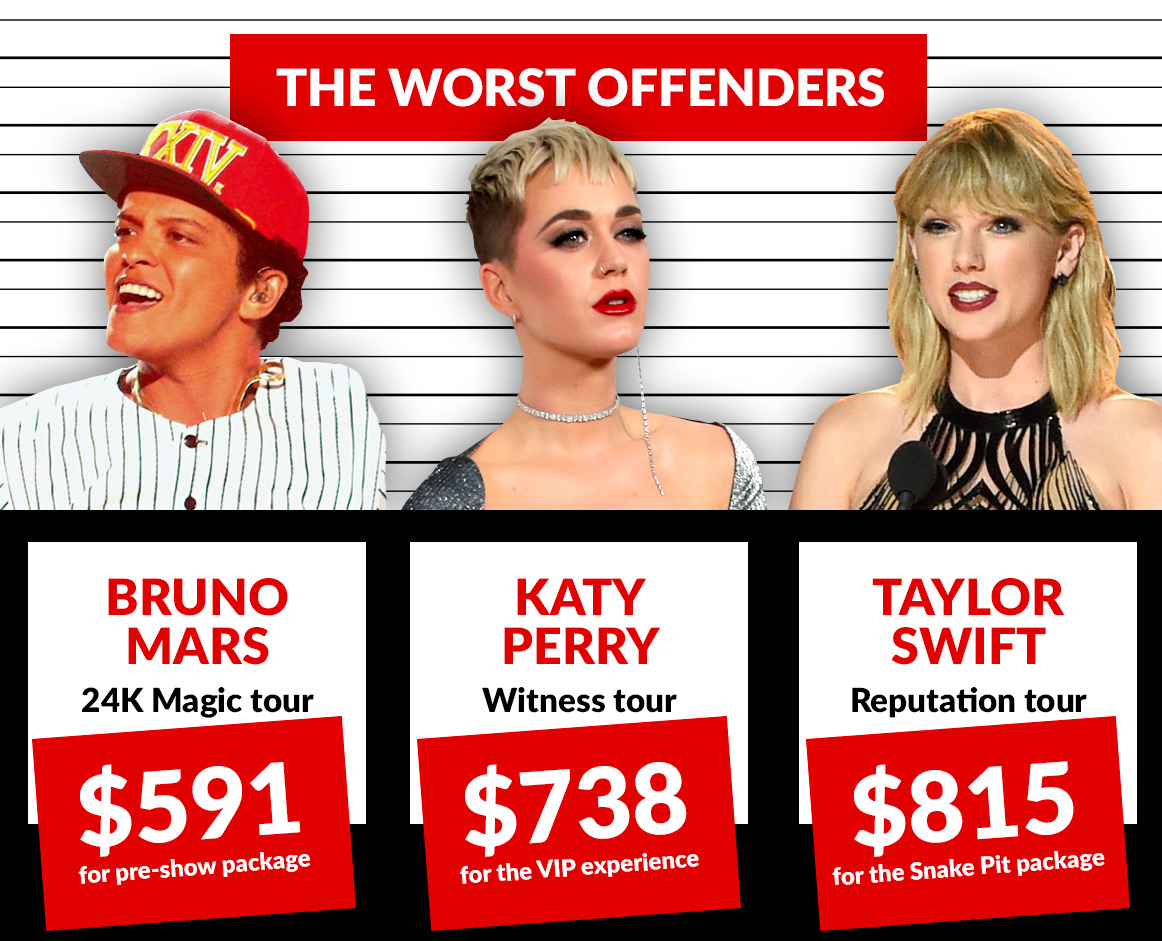 The days of a major act playing a $40 concert are gone. For example, you can still get a ticket to see US rapper Macklemore play at Melbourne’s Festival Hall in February, but a side seat with an impeded view of the stage costs more than $100.

According to US concert data experts Pollstar, the price of tickets rose far faster than inflation in 2017 – tickets cost five per cent more than 2016. In an era of famously low wages growth and low inflation, that’s a booming business.

Pollstar tracks the biggest tours in the world and the money they make. The results are, frankly, astounding. U2 takes in $8 million a show, and it played 50 shows in 2017. They charge an average of $148 a ticket, collecting revenue of $400 million for the year.

They’re not the band with the highest average price though. That honour goes to none other than the Rolling Stones. Mick and Keith charged the average punter $202 to get in. That gave them the luxury to play just 14 shows in 2017, taking 351 nights of the year off to spend their share of the $152 million in revenue.

The following table gives a glimpse of the amount of money the 20 biggest-earning acts took in during 2017. 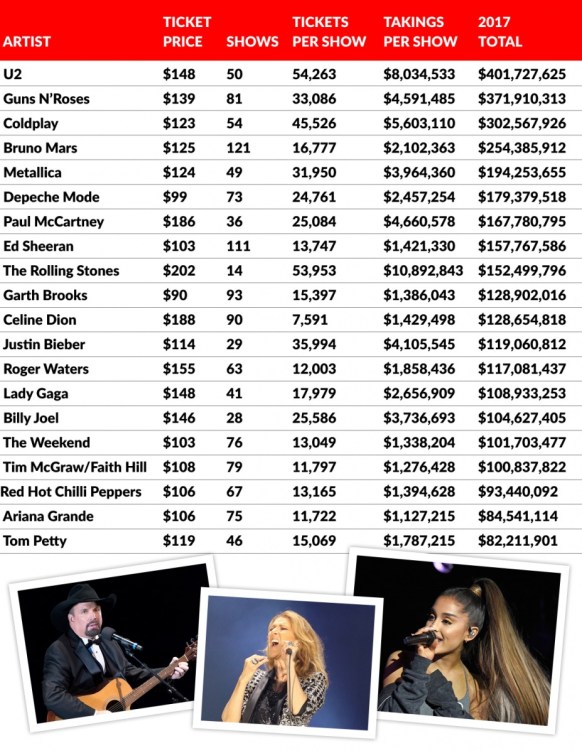 Don’t get the impression the band banks all the revenue. The live music business is one with many fingers in the pie. Venues suitable for big concerts are not cheap to book, for starters. Melbourne’s Palais Theatre – a 3000 capacity venue – is one of few to make its costs transparent.

They can add up to $33,000 a night, once sound, security and lighting are taken into account. Arenas, obviously, will cost far more, but they permit a band to please many fans in one night and move on to the next town. If revenue will be a few million every night, a stadium can easily afford to charge the band hundreds of thousands of dollars.

But there’s no need to feel sorry for the musicians. There’s a reason the top of the best-paid celebrity lists is crowded with musicians. According to several industry estimates, the artist normally takes home at least half of the ticket price, although that may have to stretch to cover their road crew and certain other touring costs.

The reasons for higher concert prices are many. For starters, the bands have learned a lot from airlines. The seats at the front often cost ten times as much as those at the back. This is especially the case for legacy acts like The Stones, whose fans are old enough they can afford to shell out $1,000 for a once-in-a-lifetime chance to relive their youth (and they definitely don’t want to have stand up for three hours.)

Tiered pricing is smart. A little-recognised benefit is that it reduces scalping. What drove scalping was serving super-fans and fans with deep pockets. Now the band itself can trouser the money those fans were happy to part with all along.

The other major factor is that bands aren’t touring to sell CDs anymore – quite the reverse. Performing is their one chance to make money, so they make the most of it. Whether it be merchandise, drinks sales, or VIP packages, they make it all available for the fans and hope to cash in.

You’re not imagining it – concert ticket prices are getting higher