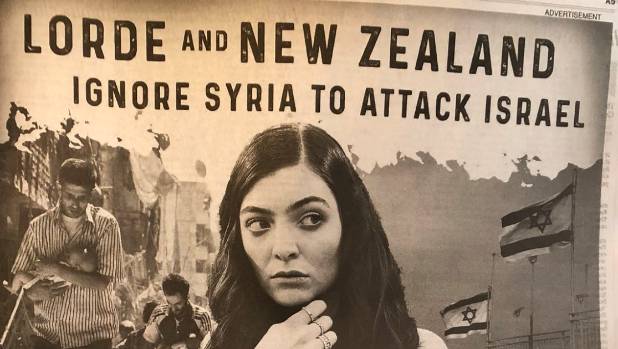 Kiwi musician Lorde has been called a bigot and New Zealand has been accused of prejudice against Israel in an advertisement run by The Washington Post newspaper.

The full-page ad, featured on page five of the paper’s New Year’s Eve edition, was placed in response to the 21-year-old hit-maker’s decision to cancel a concert in the Israeli city of Tel Aviv.

Lorde said her decision to cancel the show, scheduled for June 2018, was sparked by an open letter written by two New Zealand fans – one an Israeli, the other a Palestinian – who argued the concert would show support for Israel’s occupation of Palestine.

It followed calls by proponents of the pro-Palestinian Boycott, Divestment and Sanctions Movement to cancel her performance over Israel’s human rights record.

The advertisement was taken out by This World: The Values Network, an organisation headed by outspoken rabbi Shmuley Boteach, who calls himself “America’s Rabbi”.

The ad accused the Grammy winner of joining “a global anti-semitic boycott of Israel”, while still performing in a country like Russia.

It features a large photo of the singer superimposed over a picture of men running through rubble cradling babies with the headline: “Lorde and New Zealand ignore Syria to attack Israel”.

“While Lorde claims to be concerned with human rights, she hypocritically chose to proceed with her two concerts in Putin’s Russia, despite his support for [Syrian president Bashar al-Assad’s genocidal regime,” the ad reads.

“Let’s boycott the boycotters and tell Lorde and her fellow bigots that Jew-hatred has no place in the twenty-first century.”

The advertisement in the Post says Lorde’s decision showed how a “growing prejudice against the Jewish State” in New Zealand was “trickling down to its youth”.

It cites New Zealand’s choice in December to vote – along with 127 countries – in favour of a United Nations resolution calling for the United States to withdraw its decision to recognise Jerusalem as the capital of Israel.

Until now, the singer has been relatively free of controversy, with her talent attracting celebrity fans including Taylor Swift and Kanye West. The late David Bowie told her her music “felt like listening to tomorrow”, said The New York Times.

Lorde became a global star in 2013 with her Pure Heroine album, which spawned hits including Royals and Tennis Court and sold over three million copies.

The then-teenager was the first female artist since Adele with sales of a million for a debut album.

After a four-year break writing and recording, she released her second album Melodrama in June. It debuted at No. 1 in Australia, New Zealand, Canada and the US.

She’s currently taking a break from the 65-date tour, which will kick off again in Milwaukee on March 1.

Lorde attacked as a ‘bigot’ in ad in Washington Post